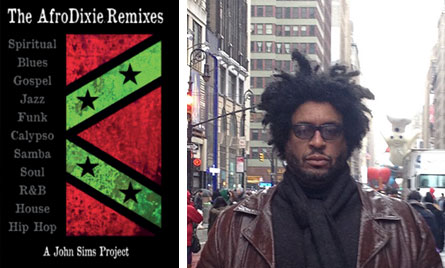 This program is inspired by VMFA’s special exhibition The Dirty South: Contemporary Art, Material Culture, and the Sonic Impulse, and the music featured in the program can be heard in the Confederate Memorial Chapel in VMFA’s E. Claiborne and Lora Robins Sculpture Garden. The Chapel is open daily from 10am–4pm.

John Sims’s audio-visual-poetic presentation subversively confronts the song “Dixie” (the anthem of the Confederacy). He remixes, remaps, and cross-appropriates a collection of 14 tracks of the song performed in the style of the following Black-music genres: spiritual, blues, gospel, jazz, funk calypso, samba, soul, rhythm & blues, house, and hip-hop. The recordings feature musicians from Sarasota, Florida, and surrounding areas. To critically engage this project with both historical and current social-political-cultural themes, the artist invited poets, artists, scholars, activists, and community members to respond to the music. John Sims, a Detroit native, is a Sarasota-based conceptual/multimedia artist, writer, and activist who creates art and curatorial projects spanning the areas of installation, performance, text, music, film, and large-scale activism, informed by mathematics, design, the politics of white supremacy, sacred symbols/anniversaries, and poetic/political text. For 20 years he has been working on the forefront of contemporary mathematical art and leading the national pushback on Confederate iconography. Currently, he is Artist in Residency at the Ringling Museum, where he developed the performance piece 2020: (Di)Visions of America.

He is also completing his two-decade national art-activism project, Recoloration Proclamation, which explores, re-examines, and remixes Confederate iconography as it relates to the African American experience. The project features recolored Confederate flags; a hanging installation in Gettysburg; a 13 southern states Confederate flag funeral; videos; site-specific performances; a play; a collection of experimental films; the music project, “AfroDixieRemixes,” the annual “Burn and Bury Confederate Flag Memorial”; and the outside performance and Kennedy Museum exhibition of “The Proper Way to Hang to a Confederate Flag” at Ohio University. Over the years, this work has incorporated more than 150 collaborators including poets, musicians, and artists throughout the country.

Clifford Chambliss III is an Artist and Community Activist.

Dr. Betty Neal Crutcher is an Educator and Consultant.

Dr. Ron Crutcher is a Professor of Music and the President of the University of Richmond.

Chlo’e Edwards is a community advocate and activist, President of Black Lives Matter 804 and Policy Analyst at Voices for Virginia’s Children.

Danita Rountree-Green, M.A., is a wordsmith, trauma healer and co- CEO of Coming To The Table-RVA.

Ava Holloway is a performer and Co-Founder of Brown Ballerinas for Change.

Dr. Madison Moore is an Artist-Scholar, DJ, and Assistant Professor of Gender, Sexuality and Women’s Studies at Virginia Commonwealth University.

Dr. Hermine Pinson is a Poet and the Frances L. and Edwin L. Cummings Professor of English & Africana Studies at William & Mary.