Darkroom: Photography and New Media in South Africa since 1950

This ground-breaking exhibition, Darkroom: Photography and New Media in South Africa since 1950, features the work of 18 photographers, new media, and video artists who lived and worked in South Africa during the apartheid era (1948-1994), as well as younger artists who have gained international prominence since then.

“Darkroom’s” eight sections highlight the ways that these artists have addressed South African culture from various perspectives, and their increased presence in the global art world since 1994. It examines the use of analog and digital media, still and moving pictures, and two- and three-dimensional formats to express relationships between mid-twentieth-century approaches and more recent ones, and differing concerns among artists of successive generations.

“The social and political transformation of South Africa is one of the most remarkable stories of the second half of the twentieth century,” says Alex Nyerges, director of the Virginia Museum of Fine Arts. “To engage with it directly through the eyes of those who experienced and documented the anguish, turmoil and elation of the period is both uplifting and thought-provoking.”

Organized by the Virginia Museum of Fine Arts and curated by Tosha Grantham, Consulting Curator. with the support of the Lettie Pate Whitehead Evans Exhibition Endowment, The Andy Warhol Foundation for the Visual Arts, the National Endowment for the Arts, and the Horace W. Goldsmith Foundation

Singer Miriam Makeba at the microphone Jürgen Schadeberg. Image courtesy of the artist 1955

Home and Away (detail) Bernie Searle 2003 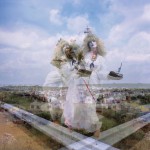 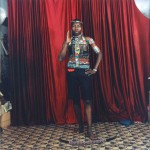