Abstract Expressionism, as a loosely defined postwar American art movement, coalesced in the 1940s and reached its height in the 1950s. Critic Clement Greenberg proclaimed that this new avant-garde made New York, rather than Paris, the center of the art world. Many of the participating artists insisted that their work was not the product of a stylistic development so much as an entire ethos that embraced the artist’s spontaneous gesture as a raw expression of identity.

Popular magazines such as Life, which published images of Jackson Pollock, Willem de Kooning and others, promoted a sense that “action painting” was the domain of men. Yet women artists had actively participated in the dialogue around abstraction from its very beginning and showed their work in many of the same galleries as their male counterparts. From subtle slights in newspaper reviews to outright exclusion from exhibitions, women faced discrimination by male artists, curators, gallery owners, and the press.

This exhibition brings together many of the women who offered innovative contributions to the vocabulary of Abstract Expressionism, pushing the movement forward and extending its boundaries. Notably, it includes four Virginians: Theresa Pollak, Nell Blaine, Dorothy Gillespie, and Judith Godwin. 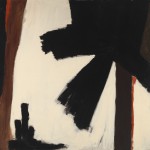 Cot and Table with Flowers, 1959, Nell Blaine (American, 1922–1996), oil on canvas. Gift of Martha Davenport in Celebration of the 60th Anniversary of The Council of VMFA