French printmaker and designer Félix Bracquemond (1833–1914) produced more than 800 etchings during a prolific career that spanned the late 19th century. Though celebrated from the outset of his career as a skilled reproductive etcher, Bracquemond enthusiastically championed the etching revival in France, prominently leading the charge toward redefining etching as a highly original art form. Despite his lived status as a luminary within Paris Salon and avant-garde artistic circles, including the Impressionists, Bracquemond is little known today.

Félix Bracquemond: Impressionist Innovator re-introduces Bracquemond as an independently-minded, ever-industrious artist through a selection of more than 80 works on paper and tableware objects, among them his most imaginative portraits, landscapes, and groundbreaking reinterpretations of the traditions of French art and decorative arts. The exhibition features expansive displays of Bracquemond’s distinctive images of birds, which reveal his deep appreciation of nature and his growing interest in Japanese visual tradition. Displays of commercial dinner services decorated by Bracquemond punctuate the exhibition, revealing the unexpected but vital role of his printmaking in ceramics production while highlighting his aesthetic experimentation when the taste for Japanese art and culture swept French society. Collectively, these selections capture Bracquemond’s vast and richly varied contributions to printmaking in a period that witnessed dynamic technical innovations in the medium in tandem with renewed popularity of etchings among the public and art collectors alike.

The exhibition draws entirely from the Frank Raysor Collection, an ongoing generous, transformative gift to the museum that contains thousands of works by Bracquemond and other leading Etching Revival artists.

Co-curated by Dr. Mitchell Merling, Paul Mellon Curator and Head of the Department of European Art and Kristie Couser, Curatorial Assistant for the Mellon Collections. 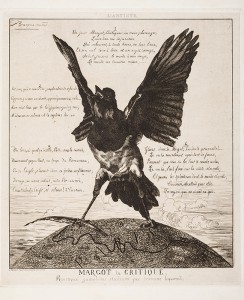 In 1874, French printmaker Félix Bracquemond (1833-1914) submitted more works than any other artist to the inaugural impressionist exhibition. The work Bracquemond displayed—at his friend Edgar Degas’s invitation—included portraits of his artistic contemporaries, naturalistic landscapes, reproductive etchings of historical European paintings, and emblematic images of birds accompanied by poems (such as Margot the Critique, or The Magpie).

Bracquemond and each of the more than 50 members of the impressionist cooperative possessed varied aesthetic goals, sharing only a determination toward artistic independence from the State-sponsored annual Salon. Today, however, major exhibitions tend to pigeonhole Impressionism as landscapes and informal portraiture by select artists, namely Claude Monet, Pierre-Auguste Renoir, Berthe Morisot, and/or Camille Pissarro. Whether for that reason or the fact that Bracquemond himself did not identify closely with the label “impressionist,” the artist’s work is often not considered alongside that of his impressionist contemporaries. The special exhibition Félix Bracquemond: Impressionist Innovator (on view Feb 14 –Oct   4, 2015) reintroduces this independent-minded artist through a selection of more than eighty works on paper and tableware objects, including his most imaginative and groundbreaking reinterpretations of French art and decorative arts traditions. 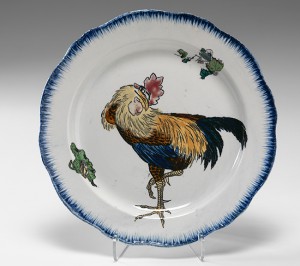 After learning etching through self-directed study, Bracquemond emerged as a leader of the Etching Revival in France. In 1863, he co-founded the Société des Aquafortistes (Society of Etchers) with enterprising publisher Alfred Cadart and fellow printmakers, whose goal was to rekindle interest in original etchings among artists and the public alike. VMFA’s exhibition includes a frontispiece that Bracquemond produced for one of the group’s albums—portfolios made available by subscription—as well as original compositions published by arts journal that promoted these experimental “painter-printmakers.”

Bracquemond’s distinctive bird imagery—well-represented in the exhibition—often reflects his taste for Japanese art. A pioneer of Japanese-inspired compositions who had procured a volume of Hokusai’s Manga (translated as “Random Sketches”) as early as 1856, Bracquemond next built his reputation as a decorative arts innovator by infusing ceramic designs with motifs adapted from Japanese print sources. The Service Rousseau, which features birds, fish, insects, and flowers that he borrowed from Manga, helped propel the popularity of Japonisme throughout France. Bracquemond briefly served as artistic director at Sèvres porcelain factory before assuming that role for Haviland Limoges porcelain manufactory until 1881. Despite these successful forays into ceramics, Bracquemond remained dedicated to exploring the vast aesthetic possibilities of the print making process into the early 20th century.

Selections for this exhibition, intended to represent the artist’s wide-ranging activity, are drawn entirely from the Frank Raysor Collection, which preserves nearly the complete œuvre of Bracquemond, including many unique and rare impressions.