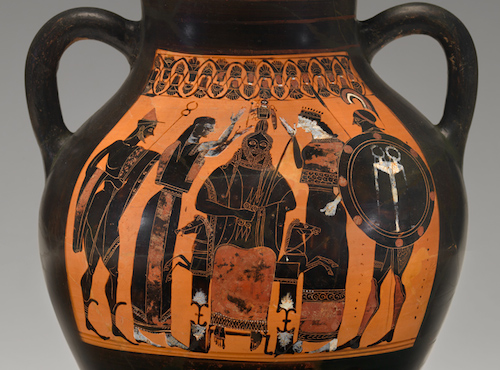 After being off view for more than five years, the Virginia Museum of Fine Art’s Classical Art gallery has reopened to the public in an expanded space with an all-new installation.

“It is incredibly exciting to see this gallery come together,” VMFA Director Alex Nyerges said, “and stunning to realize how much effort and how many people it requires to make something like this happen.”

The new installations of Greek, Etruscan and Roman art emphasize themes that encourage visitors to engage with the art and explore both ancient cultures and our own culture. No longer sharing a gallery with Egyptian art (which will reopen later this year), visitors can explore topics such as ancient warfare, sport, the importance of theatre and the variety of ways women were portrayed in ancient art. The larger gallery space also allows visitors to more easily focus on individual objects of VMFA’s collection.

Peter Schertz, Ph.D., VMFA’s Jack and Mary Ann Frable Curator of Ancient Art, said, “My job as curator is to inspire visitors to learn more about ancient art and culture. By presenting the art thematically, I hope visitors can easily engage with it, as well as think about the similarities and differences between ancient cultures and our own culture.”

Visitors get their first impression of the galleries through a glass window that overlooks the new Cochrane Atrium. Within this window is an ancient marble sarcophagus from the second century that shows erotes (winged boys) on all four sides. The Classical gallery also highlights VMFA’s statue of the Roman emperor Caligula. This statue is one of the most important works of ancient art in North America because there is only one other complete statue of Caligula in the world.

Visitors also will encounter one of the most important collections of Greek vases on the East Coast, including archaic-period Geometric pyxis, VMFA’s frequently published black figure vase of the Birth of Athena, a pseudo-rhyton in the form of a a ram, and an example of the work of the Nazzano Painter, one of the most admired artists to emerge from Etruria.

A section devoted to the exploration of artistic interactions between ancient Mediterranean cultures forms a transitional space between the Greek and Roman gallery and the future Egyptian gallery. This section includes a Faiyum portrait of a woman, an imposing relief showing the god Mithras slaying a bull, and examples of Macedonian jewelry dating to the decades after Alexander the Great conquered much of the ancient Mediterranean and Near Eastern world.

About the Virginia Museum of Fine Arts
With a collection of art that spans the globe and more than 5,000 years, plus a wide array of special exhibitions, the Virginia Museum of Fine Arts (VMFA) is recognized as one of the top comprehensive art museums in the United States. The museum’s permanent collection encompasses more than 22,000 works of art, including the largest public collection of Fabergé outside Russia and one of the nation’s finest collections of American art. VMFA is home to acclaimed collections of English Silver and Impressionist, Post-Impressionist, British Sporting and Contemporary art, as well as renowned South Asian, Himalayan and African art. In May 2010, VMFA opened its doors to the public after a transformative expansion, the largest in its 75-year history. Programs include educational activities and studio classes for all ages, plus fun after-hours events. VMFA’s Statewide Partnership program includes traveling exhibitions, artist and teacher workshops, and lectures across the Commonwealth. General admission is always free. For additional information, telephone 804-340-1400 or visit www.vmfa.museum.