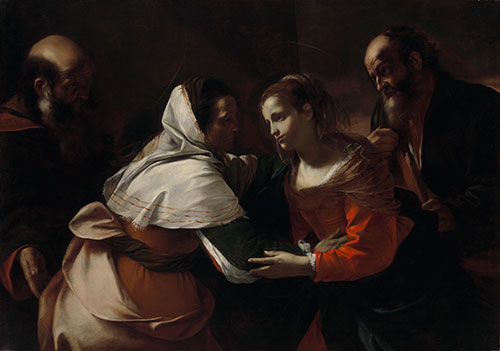 The Visitation is an exceptional religious scene by the Baroque master Mattia Preti, whose work illustrates the realistic tendencies perfected by fellow Italian artist, Caravaggio (Michelangelo Merisi). Preti is generally described as the last great exponent of Caravaggesque naturalism, and here he revels in the tenderness of the scene unlike the coarse treatments of some of his counterparts. Especially appropriate to the Christmas season, this painting depicts the meeting of the Virgin Mary and her cousin Elizabeth, the first episode in the life of Christ recorded by Luke.

Preti, although born in Calabria and active in Naples and Malta later in his career, was working in Rome at the time this painting was produced. The museum’s holdings include important works by great artists active in Naples including Luca Giordano, Paolo de Matteis, Francesco Solimena, Salvator Rosa, and Artemisia Gentileschi. The addition of this work further enhances VMFA’s collection as a destination for the study of the Neapolitan baroque.

In this powerful and dramatic painting, Preti represents the meeting of the Virgin Mary with her older cousin Elizabeth. Mary hastened to visit her kinswoman following the Annunciation by the Angel Gabriel. Elizabeth, who was soon to give birth to St. John the Baptist, recognizes that Mary has been chosen as the mother of the Son of God, and greets her with the words “Blessed art thou among women and blessed is the fruit of thy womb. . . . For lo, as soon as the voice of thy salvation sounded in mine ears, the babe leaped in my womb for joy.” (Luke 1:42-44)

“This old master painting will become a visitor favorite, as well as a touchstone for the artist,” Director Alex Nyerges said. “We can think of no better Christmas gift to the commonwealth than exquisite art for all to enjoy.”

Gilbert Stuart – “the Vandyke of the Time”– was a master portraitist whose talents coincided with the needs of a generation anxiously crafting a new American identity. After the Revolution, persons once subject to the hierarchical social structure of the British Empire were freed to negotiate public and private selves within the context of a self-determined republic. To this end, Stuart imbued his clients’ portraits with the social parity accorded an international society of merchants, landowners and aristocrats. With its dazzling display of luxurious textures, this stunning likeness of the Massachusetts matriarch, Rebecca White Pickering (1754-1828), numbers among his finest work.

“Celebrated by his contemporaries for his life portraits of George Washington,” Susan Jensen Rawles, interim department head of American art said, “Stuart’s extraordinary talents are rarely as evident as in this portrait of Rebecca Pickering, its rich tones rendered with a fluid touch. We are thrilled to add it our American collections.”

Born in Tokyo, Kawase Hasui was trained in traditional Japanese painting, watercolor, and oil painting. He studied Japanese prints with Kaburaki Kiyokata (1878-1972), and then began to work as an illustrator for magazines and advertisements. In 1918, Hasui’s first experimental prints were published by Watanabe Shōzaburō (1885-1962), initiating a collaboration that would last for the rest of Hasui’s life. The prints created by Hasui were named as “new prints” (shin-hanga), an art movement that began in the early 20th century. By bringing together the talents of an artist, a block carver, a printer, and a publisher, shin-hanga works mimicked the traditional collaborative process of ukiyo-e printmaking, as opposed to the “creative prints” (sosaku-hanga), another movement that emerged in Japan at the same time and advocated artists to create prints through their individual effort.

VMFA’s world-class Himalayan collection is enriched by the gift of a large and visually powerful Tibetan textile. Nearly eight feet tall, it is composed of hundreds of small, quilted and embroidered silk elements—most auspicious emblems—joined to form an elaborate garland centered on an unfolding lotus. This colorful hanging would once have enlivened the interior of a Buddhist temple, where it might have either fronted a large altar or hung above an entryway, rather like an ornamental festoon in western architecture. Donors Anne and Larry Heilman­­­­ of Chevy Chase, Md., acquired the textile in Kathmandu, Nepal in 1972.

About VMFA Acquisitions:
These works of art were approved by the VMFA Board of Trustees in December 2014. VMFA is a state agency and a public/private partnership. All art is purchased with private funds from dedicated endowments. After VMFA’s board approves proposed acquisitions the art becomes the property of the Commonwealth of Virginia to protect, preserve, and interpret.