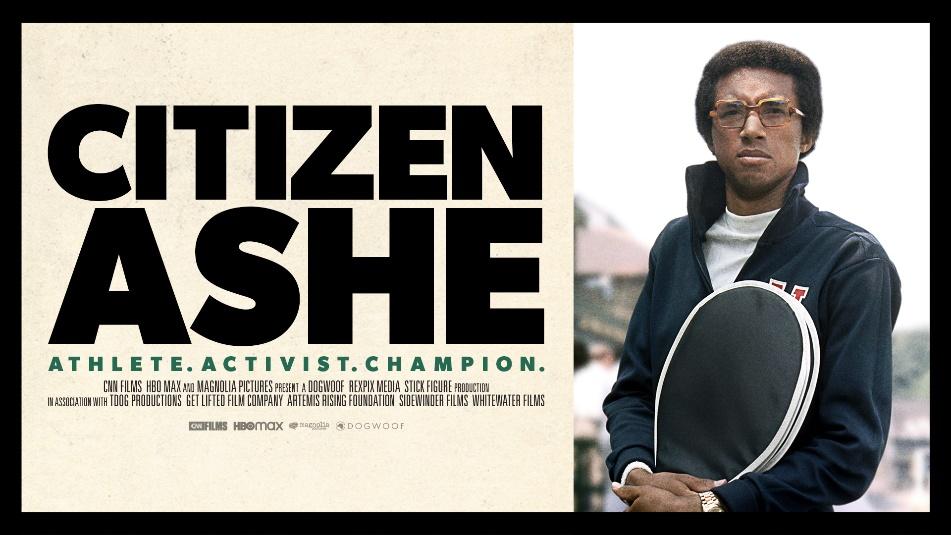 Richmond, VA — The Virginia Museum of Fine Arts (VMFA), CNN Films and HBO Max are excited to announce that the museum will host two free community screenings of Citizen Ashe, the documentary film about trailblazing tennis legend and Richmond native Arthur Ashe. The public showings are slated for Saturday, June 25, at 10:30 a.m. and 2:00 p.m. in the museum’s Leslie Cheek Theater. The 10:30 a.m. screening will be followed by a panel discussion with co-director/producer/cinematographer Rex Miller, brother Johnnie Ashe and sister Loretta Harris, moderated by historian Dr. Lauranett Lee. Tickets are free, though reservations are required.

“The Virginia Museum of Fine Arts is delighted to partner with CNN Films and HBO Max to present this compelling documentary about one of the country’s greatest athletes,” said Alex Nyerges, VMFA’s Director and CEO. “The film will be shown in Richmond for the first time, and we invite the community to see it here in the city where Arthur Ashe honed his incredible tennis skills, on courts at historic Brook Field Park.”

Citizen Ashe will make its Richmond debut two days before the start of The 135th Wimbledon Championships, the prestigious tennis tournament where, in 1975, Ashe became the first Black man to win a singles title. He remains the only Black man to win the singles title at Wimbledon as well as the U.S. Open and the Australian Open.

Told largely in Ashe’s own voice and featuring rare archival film, photography and newsreel coverage of his athletic career, the documentary follows his self-exploration, evolution on race relations, family relationships and the pivotal decisions that shaped his life.

“Growing up in segregated Richmond and playing on segregated courts, Arthur Ashe became a leader in the Black community, advocating for racial equality in the United States and abroad,” said Dr. Monroe Harris Jr., President of VMFA’s Board of Trustees. “As a respected athlete, he defied stereotypes, used his platform to give voice to social justice issues and gave agency to other Black athletes.”

“I learned that Arthur Ashe was different from who I thought he was in the 1960s. He was more than just a phenomenal tennis player,” said Director Rex Miller. “I wanted this film to shed light on the man. Arthur was also deeply committed to activism and to educating others about HIV/AIDS after he was diagnosed.”

To reserve free tickets to Citizen Ashe at the Virginia Museum of Fine Arts, visit www.VMFA.museum. Theater doors open 30 minutes before each screening.

The Virginia Museum of Fine Arts in Richmond, Virginia, is one of the largest comprehensive art museums in the United States. VMFA, which opened in 1936, is a state agency and privately endowed educational institution. Its purpose is to collect, preserve, exhibit, and interpret art, and to encourage the study of the arts. Through the Office of Statewide Partnerships program, the museum offers curated exhibitions, arts-related audiovisual programs, symposia, lectures, conferences, and workshops by visual and performing artists. In addition to presenting a wide array of special exhibitions, the museum provides visitors with the opportunity to experience a global collection of art that spans more than 6,000 years. VMFA’s permanent holdings encompass nearly 50,000 artworks, including the largest public collection of Fabergé outside of Russia, the finest collection of Art Nouveau outside of Paris, and one of the nation’s finest collections of American art. VMFA is also home to important collections of Chinese art, English silver, and French Impressionist, Post-Impressionist, British sporting, and modern and contemporary art, as well as renowned South Asian, Himalayan and African art. In May 2010, VMFA opened its doors to the public after a transformative expansion, the largest in its history.

The Virginia Museum of Fine Arts has begun its more than $190 million expansion and renovation project led by the international architecture firm SmithGroup. Tentatively scheduled for completion in 2027, the project consists of adding a new wing of nearly 170,000 square feet and renovating 45,000 square feet of existing spaces, while maintaining four acres of green space in the Sculpture Garden. Visitors will experience a seamless journey through the collections in the new wing, which will house contemporary art, African art, American art, a new suite of galleries for rotating special exhibitions, and a special-events space. The expansion and renovation will enable the museum to display more art, welcome more visitors, and provide more enjoyment.