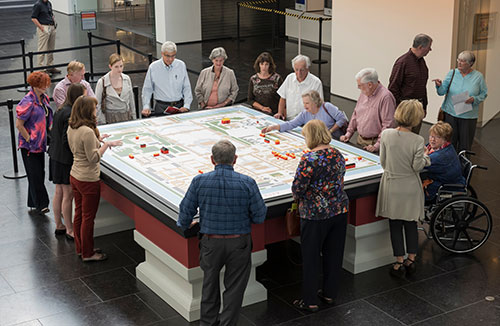 VMFA kicked off its first-ever crowdfunding campaign on September 22, 2014, and has received enthusiastic responses from the public—from Bon Air to Barcelona—raising $61,225 in a 26-day campaign. The total includes a generous match from Frank Qiu and Ting Xu on behalf of Evergreen Enterprises, who agreed to match donors’ contributions dollar-for-dollar up to $25,000. All donors to the campaign are proudly recognized on a virtual donor wall at vmfa.museum/buildit.

“When we decided to participate in the campaign to build the Forbidden City, which we have visited many times in Beijing,” Ting Xu said, “our aim was to inspire others to contribute – to build a community of support for VMFA that celebrates the arrival of Forbidden City.”

The campaign, tied to the use of 3D printing technology to print a scaled model of Beijing’s famous Forbidden City, was the museum’s first deep foray into online fundraising. More than 98 percent of the gifts were received online—a record for VMFA. Traditionally, the museum has relied upon conventional mail and print fundraising campaigns, so this crowdfunding intiative bridged a gap in generational giving methods, which is a challenge faced by many cultural institutions.

A significant goal of the campaign was to engage new audiences in supporting Virginia’s art museum.  Overall, the project attracted contributions from new and established donors alike, with gifts from new donors accounting for more than 16 percent of all gifts received.

In the third week of the campaign, VMFA announced it was raising the total campaign goal to $55,000. The aggressive goal reflected the rising anticipation for the exhibition Forbidden City: Imperial Treasures from the Palace Museum, Beijing, which opened on October 18.

On Thursday, October 16, the museum began assembling some of the hundreds of buildings in the 3D scale model of the Forbidden City in the Cochrane Atrium, revealing how 3D printing is combining art and science at VMFA. While the formal campaign closed on Friday, October 17 at 11:59 p.m. EST, gifts to support this 21st-century Forbidden City are still encouraged at vmfa.museum/buildit through the close of the Forbidden City exhibition. All gifts support the museum’s Exhibition Fund, ensuring that VMFA continues to bring vibrant exhibitions from around the world to the Commonwealth.