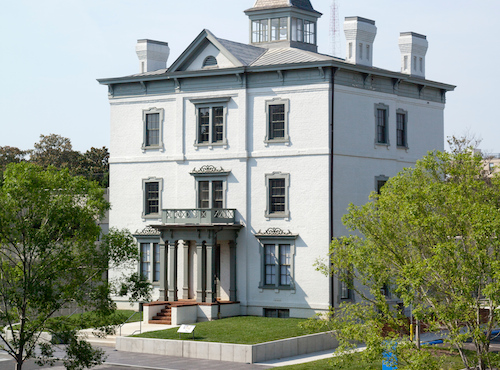 Located on the campus of the Virginia Museum of Fine Arts, the Robinson House is now included on the National Register of Historic Places designated by the National Park Service, U.S. Department of the Interior.

A nomination by VMFA was unanimously approved at the quarterly meeting of Virginia Board of Historic Resources and the Virginia State Review Board in September, designating Robinson House as a Virginia Historic Landmark. The joint boards then forwarded the nomination to the National Park Service for review. Built as a residence by Anthony Robinson, Jr., in the mid-19th century, the house was later the headquarters for R. E. Lee Camp Confederate Soldiers’ Home, the nation’s first successful and oldest operating residential complex for southern veterans.

“The historic grounds around VMFA have a rich past,” Director Alex Nyerges said. “I am delighted that scholarly research has resulted in the Robinson House becoming a National Historic Place. Besides operating a world-class art museum, we also have a deep respect for the history of the land and the buildings which the Virginia Museum is charged to protect and preserve.” Nyerges also recognized the support of the Virginia Department of Historic Resources.

VMFA and regional tourism partners announced last fall that the Robinson House will be a Richmond Regional Visitor Center, opening in the summer of 2015. The opening will be in time for the UCI World Championship Cycling event in September 2015. The preservation and rehabilitation of Robinson House will stabilize its structure, reclaim interior spaces to evoke the buildings’ historic past, and repurpose the spaces for use as a regional tourism center. VMFA also intends to honor the site’s past with a gallery interpreting the history and chronicling the land, which was once known as “The Grove.”

About Robinson House
Robinson House, a handsome Italianate structure completed in the late 1850s, was once part of a 159-acre estate belonging to prominent Richmond banker Anthony Robinson, Jr. In 1884 the house and 36 acres were sold to the R. E. Lee Camp, No. 1, Confederate Veterans, to become a residential complex for indigent and disabled veterans. The building, which gained a third floor and belvedere two years later, served as the facility’s administration building and war museum. In 1892, Lee Camp sought ongoing and increasing subsidies from the Commonwealth of Virginia to operate the Soldiers’ Home. In return, it promised to relinquish the deed to the grounds once the need to house the old veterans ended. By the time the last resident died in 1941 and the property reverted to the state, approximately 3,000 veterans had resided there. Robinson House served a variety of functions during the seven decades that followed: offices and labs for the Virginia Institute for Scientific Research (1949-63); offices, art studios, and galleries for the Virginia Museum of Fine Arts (1964-93); and offices for the Virginia Association of Museums (1995-96).
The rehabilitation of Robinson House has long been a VMFA goal. It is listed as the highest priority on the museum’s six-year Capital Outlay Plan. Funding is included in a bond package issued through the Virginia Public Building Authority, subject to the provisions in Chapter 806 of the 2013 Acts of Assembly.