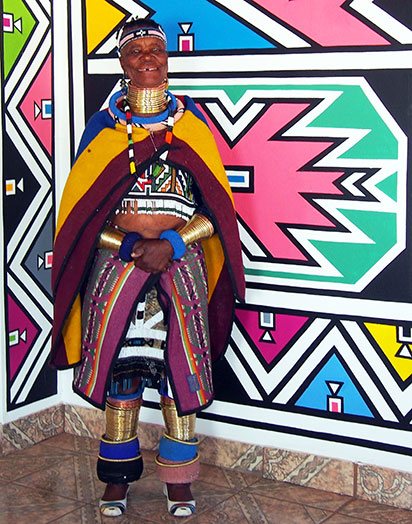 VMFA has commissioned South African artist Esther Mahlangu to create two large-scale paintings that will become part of the museum’s permanent collection. Mahlangu is the most renowned artist of South Africa’s Ndebele people, and she has developed the art of mural painting from a tradition of designs painted on the exterior of rural homes to projects created in a global, contemporary art context.

Mahlangu and her team will arrive from South Africa in early September 2014 and will remain in Richmond for a month, working daily on the commission. Ndebele painted designs echo the patterns found in their beautifully beaded vestments and jewelry, such as Mahlangu regularly wears to pridefully assert her heritage. The public is welcome to observe her while she works on the paintings and the museum has plans to document her progress. The finished work will be presented to patrons and the public in programs on October 8 and 9.

At VMFA, Esther Mahlangu will create the mural-scale works, each 9 x 15 feet, in the museum’s Evans Court, where they will become a gateway to the African art gallery. This project will advance the African department’s objective of collecting contemporary art. The pair of large, vibrantly colored paintings will energize the court as an entry to the collection and will complement the other major murals at VMFA, which include Sol Lewitt’s Wall Drawing #541 and Ryan McGinness’ Art History Is Not Linear (VMFA). Being painted on canvas, the works will be permanent and not subject to removal or repainting as has happened with some of the artist’s other projects. This will be the only major museum commission by Mahlangu in North America.

Ndebele women have always taken great pride in the decoration of their homes. During the late 19th century, painted designs on the house  exterior took on new vigor and importance, becoming  a statement of identity and resistance against displacement from the land. Esther Mahlangu learned the art of mural painting from her mother and grandmother as a young girl during the 1940s, a time when apartheid was formalized as policy within the country.The colors Ndebele muralists use have transitioned from earth tones obtained from natural substances to a brighter palette from the development of commercial paints.. Ndebele painted designs echo the patterns found in their beautifully beaded vestments and jewelry, such as Mahlangu regularly wears to pridefully assert her heritage.

Esther Mahlangu’s Career
Mahlangu’s career propelled in 1989 when she was invited to participate in the landmark Magiciens de la Terre exhibition in Paris.In 1991, BMW invited her to participate in its Art Car program. Since 1979, BMW has commissioned 15 artists, including Alexander Calder, Andy Warhol, David Hockney, and Frank Stella. Mahlangu is the only non-Western and only female artist engaged to paint a BMW car. The National Museum for Women in the Arts in Washington, DC, displayed Mahlangu’s BMW in 1994 and at the same time commissioned her to paint the façade of an annex building. In 2004, she executed a 78-foot wide mural at the art museum in Bochum, Germany, for the exhibition, New Identities: Contemporary South African Art. Today, the DC and Bochum commissions exist only in documentary form. At her home and studio in South Africa, Mahlangu is active as an artist and also teaches painting.

VMFA’s African Collection
VMFA’s African department was formed in 1976 when the museum’s collection plan was broadened to include African art. Today the collection includes more than 1,000 works representing many of Africa’s major cultures and art styles. Figures, masks, textiles, regalia, and ritual objects from more than 100 cultures provide a broad-based survey of the arts in Africa from the first millennium BC to
the present day.

About the Virginia Museum of Fine Arts
VMFA’s permanent collection encompasses more than 33,000 works of art spanning 5,000 years of world history. Its collections of Art Nouveau and Art Deco, English silver, Fabergé, and the art of South Asia are among the finest in the nation. With acclaimed holdings in American, British Sporting, Impressionist and Post-Impressionist, and Modern and Contemporary art – and additional strengths in African, Ancient, East Asian, and European – VMFA ranks as one of the top comprehensive art museums in the United States. Programs include educational activities and studio classes for all ages, plus lively after-hours events. VMFA’s Statewide program includes traveling exhibitions, artist and teacher workshops, and lectures across the Commonwealth. VMFA, a certified Virginia Green attraction, is open 365 days a year and general admission is always free. For additional information, telephone 804-340-1400 or visit www.vmfa.museum.
# # #