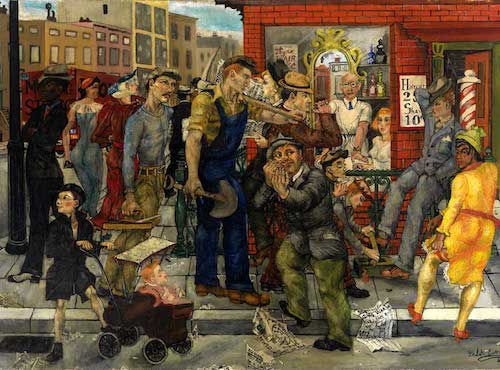 Aaron Siskind and Abstract Photography of the 1950s and 60s, Making History: 20th Century African American Art, and Sally Mann: The Flesh and The Spirit

American artist Philip Evergood’s 1936 oil on canvas “Street Corner” is among many significant works acquired recently by the Virginia Museum of Fine Arts in preparation for its grand opening May 1. The painting is the first major Depression-era Urban Realist canvas to enter the collection and was painted in the same year VMFA opened its doors.

Also added to the collection is Italian artist Pio Fedi’s plaster study for “The Sacrifice of Polyxena,” circa 1885; “Mirror with Three-light Sconce,” an American work dating from circa 1800-1820; and an array of additional American, European, Asian and African works.

Here is a listing of the recent VMFA acquisitions.

“Mirror with Three-light Sconce,” circa 1800-1820, by an unknown American, possibly Eastern Massachusetts; eastern white pine, gessoed and gilded, and iron wire with a gilded plaster ornament and with gilt brass candleholders and a mirrored plate; 54-1/2 by 26 by 10-7/8 inches; acquired through VMFA’s J. Harwood and Louise B. Cochrane Fund for American Art.

Three necklaces, late 19th-20th century, from Nagaland, India; made variously of coral and glass beads, fiber, metal and leather; one 15 inches long, another 16-1/2 inches long, and another 14 by 11 inches; gift of the estate of Barbara Watson via Eileen Dooley of Sheperdstown, W.Va.

The Virginia Museum of Fine Arts is at 200 N. Boulevard in Richmond, Va. VMFA’s holdings include more than 22,000 treasures spanning more than 5,000 years.