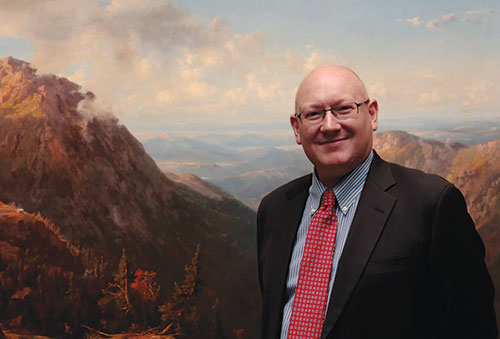 Following an extensive international search, the Virginia Museum of Fine Arts has named Dr. Michael R. Taylor as chief curator and deputy director for art and education, effective August 10. In this key leadership position, crucial to the museum’s new strategic plan, Taylor will oversee the division of art and education, which encompasses VMFA’s curatorial, exhibition, and education departments, as well as the library and statewide programs. Taylor comes to VMFA from his previous role as director of the Hood Museum of Art at Dartmouth College.

“We are extremely fortunate to have a museum leader of Michael’s caliber join our senior leadership team,” VMFA Director Alex Nyerges said. “His curatorial experience, scholarly credentials and reputation in the international arena will help move the Virginia Museum of Fine Arts to an even higher place in the world of national and global art museums. He comes as we adopt a bold and ambitious strategic plan that over the next five years will elevate our museum’s international standing through a commitment to curatorial excellence, educational outreach, and visitor engagement. I am looking forward to working closely with Michael in the coming years.”

Taylor said: “I am absolutely delighted and deeply honored to join VMFA, an institution that I have long admired for its world class collections, singular exhibitions, and remarkable educational programs. “I look forward to working closely with such a visionary director as Alex Nyerges and also VMFA’s talented staff to successfully implement the strategic plan and thus complete the transformation of VMFA that began with the 2010 expansion of its facility. I am also very excited to lead VMFA’s distinguished team of curatorial, exhibition, education, statewide, and library staff during this pivotal moment in the museum’s history.”

About Dr. Michael Taylor
A highly regarded museum administrator, curator, author, and expert on modern and contemporary art, Taylor is a scholar of Dada and Surrealism with a focus on the work and ideas of Marcel Duchamp. Taylor’s 2009 exhibition catalogue, Marcel Duchamp: Étant donnés, won both the prestigious George Wittenborn Prize and first prize for best museum permanent collection catalogue by the American Association of Art Museum Curators. Also in 2009, Taylor was co-commissioner with Carlos Basualdo for the Bruce Nauman exhibition at the American Pavilion for the 53rd Venice Biennale. The exhibition won the Golden Lion award for best national pavilion.

A native of London, England, Taylor received Master of Arts degrees in Art History from both the University of Edinburgh in Scotland and the Courtauld Institute of Art in London. He also received his Ph.D at the Courtauld Institute before joining the Philadelphia Museum of Art as Assistant Curator of Modern Art in 1997. In 2001, Taylor was promoted to associate curator, and in 2004 he was named the Muriel and Philip Berman curator of modern art and head of the department of modern and contemporary art. During his tenure at the PMA, Taylor organized a series of critically acclaimed special exhibitions, including Dorothea Tanning: Birthday and Beyond (2002); Giorgio de Chirico and the Myth of Ariadne (2003); Salvador Dalí: The Centennial Retrospective (2004-5); Thomas Chimes: Adventures in ‘Pataphysics (2007); Marcel Duchamp: Étant donnés (2009); Arshile Gorky: A Retrospective (2009); Picasso and the Avant-Garde in Paris (2010); and Paris Through the Window: Marc Chagall and His Circle (2011). He also oversaw the acquisition of major works by such notable artists as Elizabeth Catlett, Giorgio de Chirico, Beauford Delaney, Jean Dubuffet, Arshile Gorky, Philip Guston, Richard Hamilton, Jasper Johns, Ellsworth Kelly, William Kentridge, Jacob Lawrence, Roberto Matta, Bruce Nauman, Pablo Picasso, Gino Severini, Dorothea Tanning, and Hannah Wilke.

In 2011, Taylor was a fellow at the Center for Curatorial Leadership in New York City, which prepared him for the transition from curator to museum administrator. In June of that year, Taylor was appointed as director and chief executive officer of the Hood Museum of Art at Dartmouth College, a position he held until March 2015. Under his leadership, the Hood strengthened its commitment to faculty and student engagement, while also raising its national profile through a series of ambitious and timely exhibitions that reflected the extraordinary diversity and global reach of its collections, including Native American Art at Dartmouth (2012); Men of Fire: José Clemente Orozco and Jackson Pollock (2012); Crossing Cultures: The Owen and Wagner Collection of Australian Aboriginal Art at the Hood Museum of Art (2012-13); and The Women of Shin Hanga: The Judith and Joseph Barker Collection of Japanese Prints (2013); Picasso: The Vollard Suite (2013); In Residence: Contemporary Artists at Dartmouth (2014); and Witness: Art and Civil Rights in the 1960s (2014), which came to the Hood from the Brooklyn Museum.