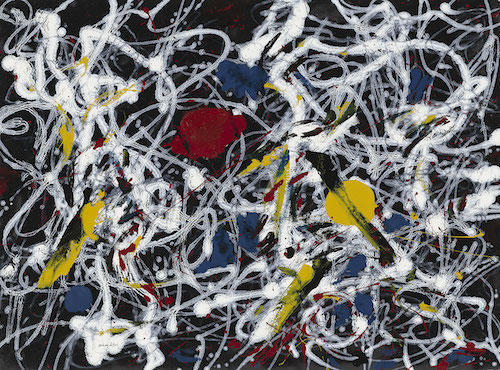 German Expressionist Art: Selections from the Fischer Collection and Tiffany: Color and Light

Overview of the Collection

Although Modern and Contemporary art spans just a century of the 6,000 years of world culture represented in VMFA’s collection, these holdings are nationally and internationally recognized as among the best in an American encyclopedic museum. The collection includes paintings, sculptures, drawings, prints, photographs, and new media, such as video and light-based art. Like many other areas of the museum, the holdings in Modern and Contemporary are a collection of collections. Sydney and Frances Lewis’s magnificent gift of Post-War art established the collection’s core strength: American painting and sculpture from the mid-1950s to the early 1980s, with a nucleus of early 1980s European art. Additional gifts and purchases have filled out the holdings, including German Expressionism from the Fischer Collection and French Modernism from the T. Catesby Jones Collection. A recent emphasis is on building the 21st-century holdings.

History of the Collection

T. Catesby Jones Collection
The collection began in earnest when VMFA’s Director Thomas C. Colt Jr. began courting T. Catesby Jones – a New York maritime lawyer who was born and raised in Virginia. Jones began giving art to the museum that year and, following his premature death in 1947, left approximately 150 paintings, sculptures, and works on paper by leading artists of the day, including Matisse, Picasso, Lipchitz, Masson, and Rouault. (The print and book collection went to his law school alma mater, the University of Virginia.) All at once, VMFA vaulted into the top tier in this field, at least for a time. The bequest was considered by experts to be one of the finest intimate collections of modern European art and at that time no more than a handful of sister institutions could claim equal or superior holdings. In the following years, VMFA collected modern art intermittently, bolstered by significant gifts, such as from former VMFA Trustee and President of the Board, Arthur S. Brinkley Jr., whose gift included a small, but choice, 1947 enamel on paper painting by Jackson Pollock.

Ludwig and Rosy Fischer Collection
Some 20 years ago, VMFA entered into an agreement with Anne Fischer to acquire by gift and purchase the last great refugee collection of German Expressionism in private hands. Anne was the daughter-in-law of Ludwig and Rosy Fischer, who assembled the collection in Germany between 1905 and the mid 1920s. Like the Lewises, the Fischers befriended many of the artists whose work they acquired and formed a collection considered among the top holdings in its day of contemporary art. It emphasizes the work of Die Brücke (“The Bridge”), including Ernst Ludwig Kirchner, Max Pechstein, Erich Heckel, and Emil Nolde. Upon Ludwig and Rosy’s deaths, the collection was passed to their two sons, Max and Ernst. In 1934, Ernst left Germany with his family and his half of the collection and accepted a position at the Medical College of Virginia in Richmond. Max’s half of the collection stayed in Germany, which was variously sold, confiscated, and destroyed by the Nazis. Following Anne’s death in 2009 (she lived to 105), the Ludwig and Rosy Fischer Collection of German Expressionist Art comprising 200 works became part of VMFA’s permanent collection through a gift-purchase agreement.

Sydney and Frances Lewis Collection
Sydney and Frances Lewis first gave art to the museum in 1969, contributing three Andy Warhol Marilyn prints. Their contemporary collecting had begun modestly in the early 1960s, when they visited New York museums and galleries for relaxation from the demands of their business, Best Products, Inc. They collected much more actively once they met Andy Warhol in 1965. His multi-part portrait of Frances, sometimes known as Sydney’s Harem, was the first Warhol in their collection. The friendship with Warhol confirmed the Lewises’ desire to buy the art of their time and to befriend the artists whose work they collected. By the end of the 1960s, the Lewises were part of the elite cadre of those collecting contemporary art. In the early 1970s, Best Products went public, expanding from four Virginia stores to a nationwide presence. Throughout the next 20 years, many struggling artists received their first washer, dryer, television, or dishwasher from Best Products in payment for their artwork. These bartered works mostly joined the corporate collection, which ultimately grew to nearly 1600 works, 33 of which the company gave to VMFA in 1978 and 1990. In 1971, the Lewises offered VMFA a five-year grant of $100,000 (more than $500,000 today) to support emerging artists by buying artworks that cost $1,500 to $3,500. The Lewis Contemporary Art Fund, administered by New York art dealer Ivan Karp, added 47 paintings, sculptures, and drawings to VMFA’s holdings.
In 1979, the Lewises announced that they would give the best of their private collection, which had grown to more than 1,000 objects, to VMFA. They continued collecting and the museum received their gift of more than 230 works in 1985, including important works by Mark Rothko, Philip Guston, Helen Frankenthaler, Robert Rauschenberg, Jasper Johns, Cy Twombly, Sol LeWitt, Donald Judd, Julian Schnabel, Susan Rothenberg, and Francesco Clemente. Since that time, VMFA has made additional acquisitions using funds from the endowment the Lewises provided.

21st-Century Art
This is the fastest growing area of the Modern and Contemporary collection with some 160 works in a wide spectrum of media presenting key development in art since 2000. VMFA’s collection reflects the expanded art world with the inclusion of work from South Africa, Ethiopia, India, Pakistan, and Iraq, as well as the United States, South America, and Europe. The collection is also building strong representation of work by women artists, artists of color, and Virginia artists. Artists represented include Kristen Baker, Tara Donovan, Lalla Essaydi, Inka Essenhigh, Teresita Fernandez, Spencer Finch, Ceal Floyer, David Goldblatt, William Kentridge, Robert Lazzarini, Sol LeWitt, Ryan McGinness, Julie Mehretu, Tony Oursler, Ivan Navarro, Farhad Moshiri, Ravinder Reddy, Alexis Rockman, Shahzia Sikander, Fred Tomaselli, Bill Viola, Jack Whitten, Kehinde Wiley, and Yukinori Yanagi. A generous contribution from Pam and Bill Royall in 2011 of funds dedicated to 21st-century art has encouraged VMFA’s activity in this area. Many other collectors in Richmond and beyond have also made significant contributions of art and funds to support the growth of the 21st-Century collection.
John B. Ravenal
Sydney and Frances Lewis Family Curator of Modern and Contemporary Art