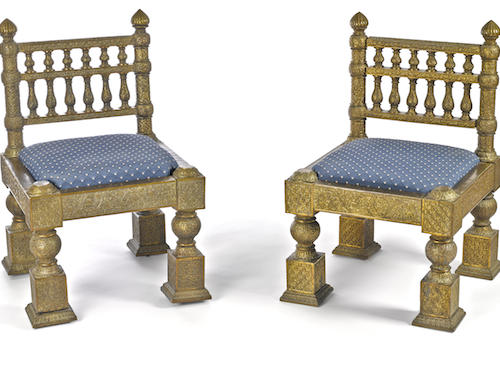 VMFA’s acquisition of one of only two known Herter Brothers Drawing Room chairs with original upholstery from the William H. Vanderbilt residence marks a strong addition to the museum’s acclaimed Aesthetic movement holdings.

In 1879, Christian Herter, principal of the high-end manufacturing concern Herter Brothers, received the defining commission of his extraordinary career: the interior and exterior decoration of the William H. Vanderbilt residence at 640 Fifth Avenue, New York. The Vanderbilt commission ranked as the foremost domestic project of the Gilded Age, and the mansion conveyed the “new impulse now felt in the national life . . . when wealth … has begun to re-invent everything, and especially the House.” This chair gives visual testimony to Herter’s unique accomplishment. Situated in the famed Drawing Room, its carved, gilded, and mother-of-pearl inlaid surface complemented the interior’s dazzling holistic effect. The rich show cover and ornamental trim represent a rare survivor of the period.

The conservation of this remarkable Herter chair will be undertaken by specialist conservators at the Metropolitan Museum of Art in tandem with its mate, their recently acquired Lady’s Armchair. The two museums have a history of collaboration—most recently in the restoration and on-going installation of VMFA’s Worsham-Rockefeller Bedroom and the Metropolitan’s Worsham-Rockefeller Dressing Room.

VMFA’s outstanding American and South Asian collections are bridged by the recent acquisition at auction of a pair of spectacular brass-clad chairs designed by Lockwood de Forest. Reportedly modeled after a silver chair – likely a princely throne – he saw in a palace at Jodhpur, the pair would have been crafted at the Ahmadabad Wood Carving Company, established in 1879 by de Forest to supply finely carved, inlaid, and brass-clad objects to his partnership with Louis Comfort Tiffany.

The provenance of these two chairs is as dazzling as their intricately tooled surfaces. Appearing in photographs of de Forest’s first New York showroom, they were retained when he moved in 1888 to 7 East 10th Street, where they were used in the front hall of his elaborate home. There they remained until being purchased at auction in 1922 for William Randolph Hearst, who was then spending lavishly to furnish his San Simeon Castle. Since 1941, the pair has been in the collection of a New England family. Reflecting traditional Indian craft of the highest order, these opulent chairs embody the late 19th-century Aesthetic movement’s fascination with the Orient and provide a fascinating link between Indian Maharajas and an American Mogul.

Descended in the Zorach family, this lyrical painting enhances VMFA’s survey of modernist art and increases the number of independent early-20th-century women – “instinctive rebels” (in the words of Zorach’s daughter) such as Georgia O’Keeffe and Florine Stettheimer – in the American art collection. Moreover, it deepens the museum’s holdings of artist portraits in different media.

Celebrated for her strong sense of color and design in painting and textile, California-born Marguerite Thompson Zorach belonged to America’s pioneering generation of avant-garde artists. Along with her husband, William, she exhibited her post-impressionist and fauve-inspired paintings in a number of important exhibitions of modern art, including the landmark 1913 Armory Show, which is currently marking its centenary. This striking painting from 1921—an intimate portrait of Marguerite (at left) and her younger sister, Edith, in a dynamic cityscape of fragmented buildings—is representative of the family themes that run throughout Zorach’s career. Its simplified forms and angularity reveal the artist’s contemporary study of American folk art as well as Egyptian sculpture.

VMFA has acquired four vintage photographs by Cy Twombly taken in 1951. Born and raised in Lexington, Va., Twombly received two early VMFA fellowships, the first of which extended from 1950 through 1951 and funded his time at Black Mountain College, where he made these images. The museum’s archives include his required bimonthly reports to then director Leslie Cheek, in which he describes the significant artistic transformation he experienced that year. The role of the photographs in Twombly’s oeuvre, as well as the artist’s history with the museum, make VMFA a particularly rich context for these works. They join Twombly’s painting, Synopsis of a Battle, 1968 in VMFA’s collection.

VMFA has acquired the beaded vestments of a Zulu man and woman, augmenting its significant holdings of African costume and related forms of adornment. The man’s outfit was created by Mantuli Biyela for her husband, Mthandeni Biyela. They were later purchased by Nesta Zondi directly from Mantuli Biyela, who sold them after her husband had passed away. Over many years, Zondi and her family worked tirelessly to preserve the Zulu’s distinctive heritage of exquisite beadwork. In addition to the masculine “cat tail” aprons, the Bieyla vestments include a shawl, a skirt to be drawn around back of the waist, a decorative girdle, a purse, a snuff spoon, and a sweets tin. A long bandolier and a cluster of necklaces complete the showy ensemble. All of the items are thoroughly ornamented with beads.

The elaborate woman’s outfit includes a long beaded overskirt panel and beaded shawl. These are supplemented with richly beaded accouterments including two bandoliers, two necklaces, a belt, and a hat ornamented with lacy beadwork on the front edge and several beaded panels attached. The woman’s ensemble was originally collected by Lionel Finneran, and comes from the Philips collection in South Africa. Both works were created during the dire years of the mid-20th century when the Zulus and other native peoples faced increasing hardship and racial persecution. Seen against this background, when western clothing was becoming more standard, the outfits represent strong declarations of Zulu identity and pride.

About the acquisitions
The artworks were approved by the VMFA Board of Trustees in September 2013. VMFA is a state agency and a public/private partnership. All works of art are purchased with private funds from dedicated endowments. After VMFA’s board approves proposed acquisitions on a quarterly basis, the art becomes the property of the Commonwealth of Virginia to protect, preserve, and interpret.

About the Virginia Museum of Fine Arts
VMFA’s permanent collection encompasses more than 33,000 works of art spanning 5,000 years of world history. Its collections of Art Nouveau and Art Deco, English silver, Fabergé, and the art of South Asia are among the finest in the nation. With acclaimed holdings in American, British Sporting, Impressionist and Post-Impressionist, and Modern and Contemporary—and additional strengths in African, Ancient, East Asian, and European—VMFA ranks as one of the top comprehensive art museums in the United States. Programs include educational activities and studio classes for all ages, plus lively after-hours events. VMFA’s Statewide Partnership program features traveling exhibitions, artist and teacher workshops, and lectures across the Commonwealth. VMFA is open 365 days a year and general admission is always free. For additional information, telephone 804-340-1400 or visit www.vmfa.museum.