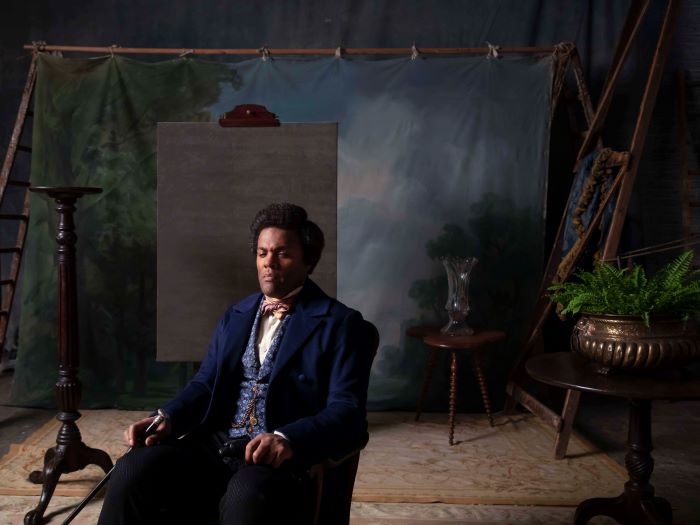 Richmond, Virginia — The Virginia Museum of Fine Arts (VMFA) is excited to announce the multi-screen film installation Isaac Julien: Lessons of the Hour — Frederick Douglass, on view at the museum in Richmond from December 10, 2022 through July 9, 2023. The installation is organized by Valerie Cassel Oliver, VMFA’s Sydney and Frances Lewis Family Curator of Modern and Contemporary Art.

“The Virginia Museum of Fine Arts is delighted to present this compelling work about Frederick Douglass, one of the most significant figures in American history,” said Alex Nyerges, VMFA’s Director and CEO. “Through his advocacy in abolition and women’s suffrage, he called on the nation to make important reforms and embrace human rights, regardless of race or gender.”

The Virginia Museum of Fine Arts will present the film as an immersive ten-screen experience as envisioned by its creator, internationally renowned London-born artist and filmmaker, Sir Isaac Julien. The work is a poetic meditation on the great abolitionist and features a series of vignettes from Douglass’ life prior to and during his travel to the United Kingdom in 1841. Using arresting visuals and sound, Julien brings the historical figure to life and collapses time and space to bridge history with the persistent concerns of our day.

“We are thrilled to have Lessons of the Hour — Frederick Douglass in VMFA’s collection,” said Cassel Oliver. “Frederick Douglass’ powerful orations and the innovative and captivating cinematography of Issac Julien will help visitors better understand Douglass’ legacy and the relevance to our contemporary experience.”

Douglass is portrayed by Shakespearean actor Ray Fearon in a series of fragmented scenes that are woven with spoken word, photography and contemporary footage to make the historic figure’s modern-day relevance and resonance undeniable. The 25-minute installation, which appears on multiple screens where images converge as a whole and then fragment into a montage, can be watched repeatedly, welcoming visitors to sit in the meditative space for a nonlinear viewing experience that makes each encounter with the work unique.

The installation also includes three tintype portraits — a collaboration between Julien and photographer Rob Ball — of the film’s subjects, Frederick Douglass, his wife Anna Murray Douglass and prominent African-American photographer J. P. Ball. Douglass was aware that words and images had powerful meaning. He used media, specifically photography, to counter the misperceptions of Black people in 19th-century America. Through a lifelong collaboration with Ball, Douglass had portraits taken of himself, portraying the Black body as noble and beautiful, and became the most photographed individual of the century.

The world premiere of the rare ten-screen film installation of Isaac Julien: Lessons of the Hour — Frederick Douglass took place in 2019, at the Memorial Art Gallery at the University of Rochester, which commissioned the film and partnered with VMFA to acquire the work for both museums’ permanent collections.

For more information about Isaac Julien: Lessons of the Hour — Frederick Douglass and programs related to the exhibition, visit www.VMFA.museum.

Sir Isaac Julien (British, born 1960) is a filmmaker and installation artist from London. He is a pioneer of the art of the moving image who has innovated a distinctive multi-screen form of storytelling over three decades. A graduate of the Central Saint Martin’s School of Art in London, Julien completed his postdoctoral studies at Les Entrepreneurs de l‘Audiovisuel Européen, Brussels. His 1991 debut feature Young Soul Rebels won the Semaine de la Critique prize at the Cannes Film Festival. He is a founding member of both the Sankofa Film and Video Collective and Normal Films.

Julien was awarded the title Commander of the Most Excellent Order of the British Empire (CBE) in Queen Elizabeth’s 2017 birthday honors and in 2022, he was granted a knighthood as part of the Queen’s Honours List. His works are held in collections that include Tate, London; the Museum of Modern Art, New York; Centre Pompidou, Paris; the Solomon R. Guggenheim Museum, New York; the Hirshhorn Museum and Sculpture Garden, Washington DC; and the Albright Knox Art Gallery, Buffalo, New York. Julien’s solo works have been exhibited at venues throughout the world, including De Pont Museum, Netherlands; Museum of Modern Art, New York; Art Institute of Chicago, Illinois; and The Bass Museum, Miami.

In Richmond, Isaac Julien: Lessons of the Hour — Frederick Douglass is sponsored by Altria, Hubert G. Phipps, Nancy and Wayne Chasen, Mr. and Mrs. R. Augustus Edwards III, Michelle and John Nestler, Michael Schewel and Priscilla Burbank. Marketing support for Evans Court exhibitions is provided by the Charles G. Thalhimer Fund. Lessons of the Hour  — Frederick Douglass was commissioned and acquired by the Virginia Museum of Fine Arts in partnership with Memorial Art Gallery at the University of Rochester, and with generous support from Mark Falcone and Ellen Bruss, Ford Foundation, VIA Art Fund, and Lori Van Dusen. The commission is also made possible by Barbara and Aaron Levine, Deborah Ronnen, the Maurice and Maxine Forman Fund, the Marion Stratton Gould Fund, the Herdle-Moore Fund, the Strasenburgh Fund, and the Lyman K. and Eleanore B. Stuart Endowment Fund. Production of the work is generously supported by Victoria Miro, London/Venice; the Arts Division of the University of California Santa Cruz; and by Eastman Kodak Company, on whose film stock the work was shot.

The Virginia Museum of Fine Arts in Richmond, Virginia, is one of the largest comprehensive art museums in the United States. VMFA, which opened in 1936, is a state agency and privately endowed educational institution. Its purpose is to collect, preserve, exhibit and interpret art, and to encourage the study of the arts. Through the Office of Statewide Partnerships program, the museum offers curated exhibitions, arts-related audiovisual programs, symposia, lectures, conferences, and workshops by visual and performing artists. In addition to presenting a wide array of special exhibitions, the museum provides visitors with the opportunity to experience a global collection of art that spans more than 6,000 years. VMFA’s permanent holdings encompass nearly 50,000 artworks, including the largest public collection of Fabergé outside of Russia, the finest collection of Art Nouveau outside of Paris and one of the nation’s finest collections of American art. VMFA is also home to important collections of Chinese art, English silver, and French Impressionist, Post-Impressionist, British sporting and modern and contemporary art, as well as renowned South Asian, Himalayan and African art. In May 2010, VMFA opened the James W. and Frances G. McGlothlin Wing I after a transformative expansion, previously the largest in its history.

The Virginia Museum of Fine Arts has begun its more than $190 million expansion and renovation project led by the international architecture firm SmithGroup. Tentatively scheduled for completion in 2027, the project consists of adding a new wing of nearly 170,000 square feet and renovating 45,000 square feet of existing spaces, while maintaining four acres of green space in the Sculpture Garden. Visitors will experience a seamless journey through the collections in the new wing, which will house contemporary art, African art, American art, a new suite of galleries for rotating special exhibitions and a special-events space. The expansion and renovation will enable the museum to display more art, welcome more visitors and provide more enjoyment.