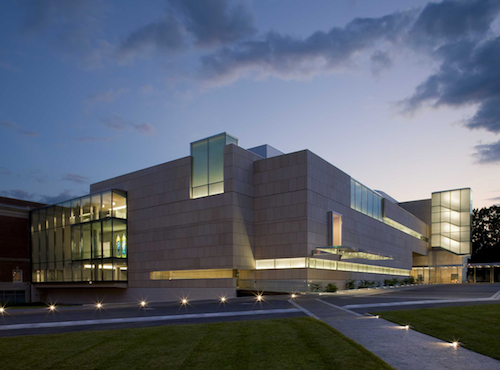 Rick Mather, architect of the James W. and Frances G. McGlothlin Wing and the E. Claiborne and Lora Robins Sculpture Garden of the Virginia Museum of Fine Arts, has died at age 75 after a short illness.

“Rick Mather had a remarkable vision that made real our goal for an elegant, yet friendly and accessible art museum that also functions beautifully,” VMFA Director Alex Nyerges said. “A lifelong gardener, it was Rick’s idea to locate the sculpture garden atop the new parking deck, creating a new and dramatic outdoor space. Particularly talented at integrating the old and new, Rick brilliantly used existing windows in our 1985 building as doorways which now serve as bridges connecting the galleries. The expansion added 50 percent more gallery space for the museum’s permanent collections and doubled the space dedicated to changing exhibitions.”

Mather, whose office is based in London, was nominated for the Stirling Prize in 2010. He completed expansions for the Ashmolean Museum in Oxford in 2009 and the Virginia Museum of Fine Arts in 2010. In 2011, Mather’s design for the VMFA project garnered a prestigious International Award for architectural excellence from the Royal Institute of British Architects and was shortlisted for the RIBA’s Lubetkin Prize. The International Award jury commented, “This is Mather at his best: making sense of what is there but adding his own finely-honed stamp. The museum, which used to turn its back on the city with it blind facades, now addresses the grand boulevard on which it is sited in a very civic manner with a 40 foot high window of low-energy glass. Materially the building takes its cue from the old in its use of limestone. This is masterful city-making.” For the VMFA project, Mather’s office teamed with the Richmond firm SMBW, forming the partnership Rick Mather + SMBW.

The Virginia Museum was his first U.S. commission, and is one of the largest works of his career. The Peabody Essex Museum in Salem, Mass., currently has a Mather expansion in progress, scheduled for completion in 2017. Among numerous other noteworthy projects, Mather worked on the master plan for London’s South Bank Centre and expansions to the National Maritime Museum in Greenwich, the Dulwich Picture Gallery, and the Wallace Collection in London.

The American-born architect founded his practice in 1973. He came to the UK from Oregon to study urban design at the AA. Mather served on the RIBA and AA councils and is a former trustee of the V&A Museum. The University of Oregon awarded him the Ellis F Lawrence Medal, its higher award for an alumnus.

About the Virginia Museum of Fine Arts
VMFA’s permanent collection encompasses more than 33,000 works of art spanning 5,000 years of world history. Its collections of Art Nouveau and Art Deco, English silver, Fabergé, and the art of South Asia are among the finest in the nation. With acclaimed holdings in American, British Sporting, Impressionist and Post-Impressionist, and Modern and Contemporary art – and additional strengths in African, Ancient, East Asian, and European – VMFA ranks as one of the top comprehensive art museums in the United States. Programs include educational activities and studio classes for all ages, plus lively after-hours events. VMFA’s Statewide Partnership program includes traveling exhibitions, artist and teacher workshops, and lectures across the Commonwealth. VMFA is open 365 days a year and general admission is always free. For additional information, telephone 804-340-1400 or visit www.vmfa.museum.