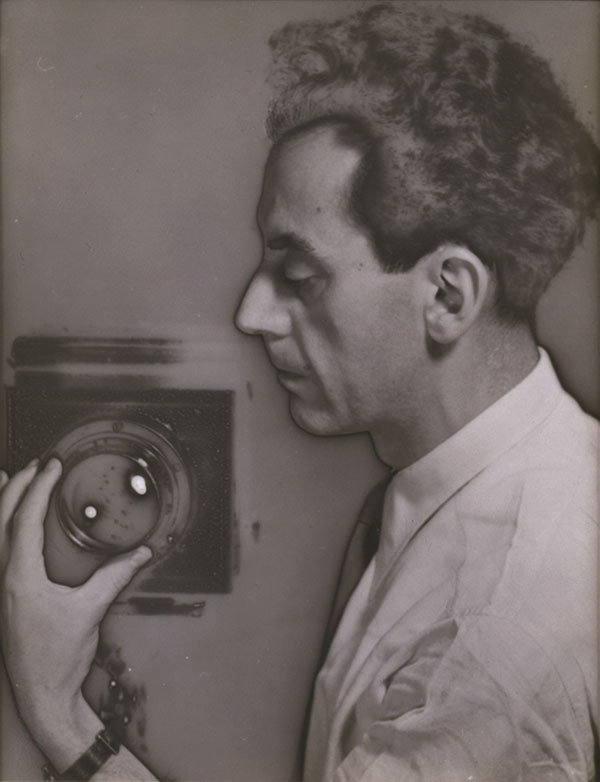 The son of Russian-Jewish immigrants, Emmanuel “Manny” Radnitzky grew up in New York and adopted the pseudonym Man Ray around 1912. A timely sale of paintings to Ferdinand Howald, an art collector from Columbus, Ohio, provided Man Ray with funds for a trip to Paris, and he arrived in the French capital on July 22, 1921. Although the artist worked in a variety of media over the next two decades, including assemblage, film, sculpture and painting, photography would be his primary means of artistic expression in Paris.

Shortly after moving to France, Man Ray embarked on a sustained campaign to document the international avant-garde in a series of remarkable portraits that established his reputation as one of the leading photographers of his era. Man Ray’s portraits often reflect a dialogue or negotiation between the artist’s vision and the self-fashioning of his subjects. Whether they had their portrait taken to promote their work, affirm their self-image, project their desires, fulfill their dreams or create a new identity, Man Ray’s sitters were not inanimate objects, like blocks of marble to be shaped and coerced, but were instead highly creative cultural and thought leaders who were active participants in the creative act. By telling the stories of his respective sitters and the innovative techniques he used to create their portraits, Man Ray: The Paris Years empowers the subjects portrayed in these photographs and gives them an agency and voice that is not typically realized in monographic accounts of modern artists.

“Timed to coincide with the 100th anniversary of the artist’s arrival in the French capital and, coincidentally, the near-centennial anniversary of the Spanish flu pandemic, Man Ray: The Paris Years will prove to be a visually provocative and especially relevant exhibition,” said Alex Nyerges, VMFA’s Director and CEO. “This is an opportunity to better understand the lives of his subjects and see Man Ray in a different light.”

“Man Ray used photography to challenge artistic traditions and break boundaries, including fixed gender roles and racial barriers,” said Taylor. “His portraits went beyond recording the mere outward appearance of the person depicted and aimed instead to capture the essence of his sitters as creative individuals, as well as the collective nature and character of Les Années folles (the crazy years) of Paris between the two world wars.”

Man Ray’s radical portraits also capture an important constituency of the avant-garde at this time, namely the femme moderne (modern woman). Adventurous, ambitious, assertive, daring, enterprising and self-assured modern women like American photographers Berenice Abbott and Lee Miller, French artist Suzanne Duchamp and American sculptor Janet Scudder took full advantage of their unprecedented freedom and access to educational and professional opportunities to participate as equals to their male counterparts in the Parisian avant-garde. Although these women came from different classes and economic backgrounds, they shared a collective goal in the 1920s and 1930s to be creatively, financially and intellectually independent.

The exhibition also tells the important stories of Black subjects such as Henry Crowder, Adrienne Fidelin and Ruby Richards, whose contributions have often been unfairly relegated to the margins of modernism due to the legacy of colonialism and racism. The artist’s series of portraits of the dancer andsinger Ruby Richards, who was born in St. Kitts in the British West Indies and grew up in Harlem, New York, brings to light an important performer whose work with Man Ray has never been acknowledged in previous accounts of his work. Richards moved to Paris in 1938 to replace the legendary African American performer Josephine Baker as the star attraction at the Folies Bergère, and the famous cabaret music hall commissioned Man Ray to help introduce her to French audiences through his portrait photographs.

Many of the subjects portrayed in Man Ray’s photographs were born in Spanish-speaking countries such as Argentina, El Salvador, Peru and Spain, including famous modern artists like Salvador Dalí and Pablo Picasso, as well as the flamenco dancer Prou del Pilar and the pianist Ricardo Viñes. As a state art museum that has free general admission and is open 365 days a year, VMFA is committed to representing the cultural and linguistic diversity of our community. According to recent data from the U.S. Census Bureau, more than 7 percent of Virginia’s 8.5 million residents speak Spanish at home. This data has informed the museum’s decision to incorporate dual-language labels throughout the Man Ray: The Paris Years exhibition, as well as the audio tour and gallery guide. Recognizing that English is not the native language of everyone who visits the exhibition, VMFA is offering content in both Spanish and English to create a more accessible, inclusive and welcoming experience for all of our visitors.

Informed by extensive archival research, this exhibition and accompanying catalogue offers a more complete account of Man Ray’s Paris years by focusing not just on his achievement as a photographer and his superb gifts as a portraitist, but also on the friendships and exchange of ideas that took place between the artist and his subjects in Paris between the two world wars.

For more information about Man Ray: The Paris Years and programs related to the exhibition, visit www.VMFA.museum.

Ticket Information
Tickets for the exhibition Man Ray: The Paris Years will go on sale online August 26, 2021: $16 for adults; $12 for seniors 65+, and $10 for youth 7-17 and college students with ID. The exhibition is free for VMFA members, children ages 6 and under, and active-duty military personnel and their immediate families.

About the Virginia Museum of Fine Arts
The Virginia Museum of Fine Arts in Richmond, Virginia, is one of the largest comprehensive art museums in the United States. VMFA, which opened in 1936, is a state agency and privately endowed educational institution. Its purpose is to collect, preserve, exhibit, and interpret art, and to encourage the study of the arts. Through the Office of Statewide Partnerships program, the museum offers curated exhibitions, arts-related audiovisual programs, symposia, lectures, conferences, and workshops by visual and performing artists. In addition to presenting a wide array of special exhibitions, the museum provides visitors with the opportunity to experience a global collection of art that spans more than 6,000 years. VMFA’s permanent holdings encompass nearly 50,000 artworks, including the largest public collection of Fabergé outside of Russia, the finest collection of Art Nouveau outside of Paris, and one of the nation’s finest collections of American art. VMFA is also home to important collections of Chinese art, English silver, and French Impressionist, Post-Impressionist, British sporting, and modern and contemporary art, as well as renowned South Asian, Himalayan, and African art. In May 2010, VMFA opened its doors to the public after a transformative expansion, the largest in its history.

The museum has undertaken an exciting $190 million expansion and renovation, anticipated to be complete in late 2025. International firm Smith Group is charged with designing a 105,000-square-foot wing for contemporary art, African art, photography, special exhibitions and events; a new 40,000-square-foot collections center to accommodate an expanded conservation department and collections storage; and 45,000 square feet of renovations to the museum’s 1936 building, 1970 building and Leslie Cheek Theater.