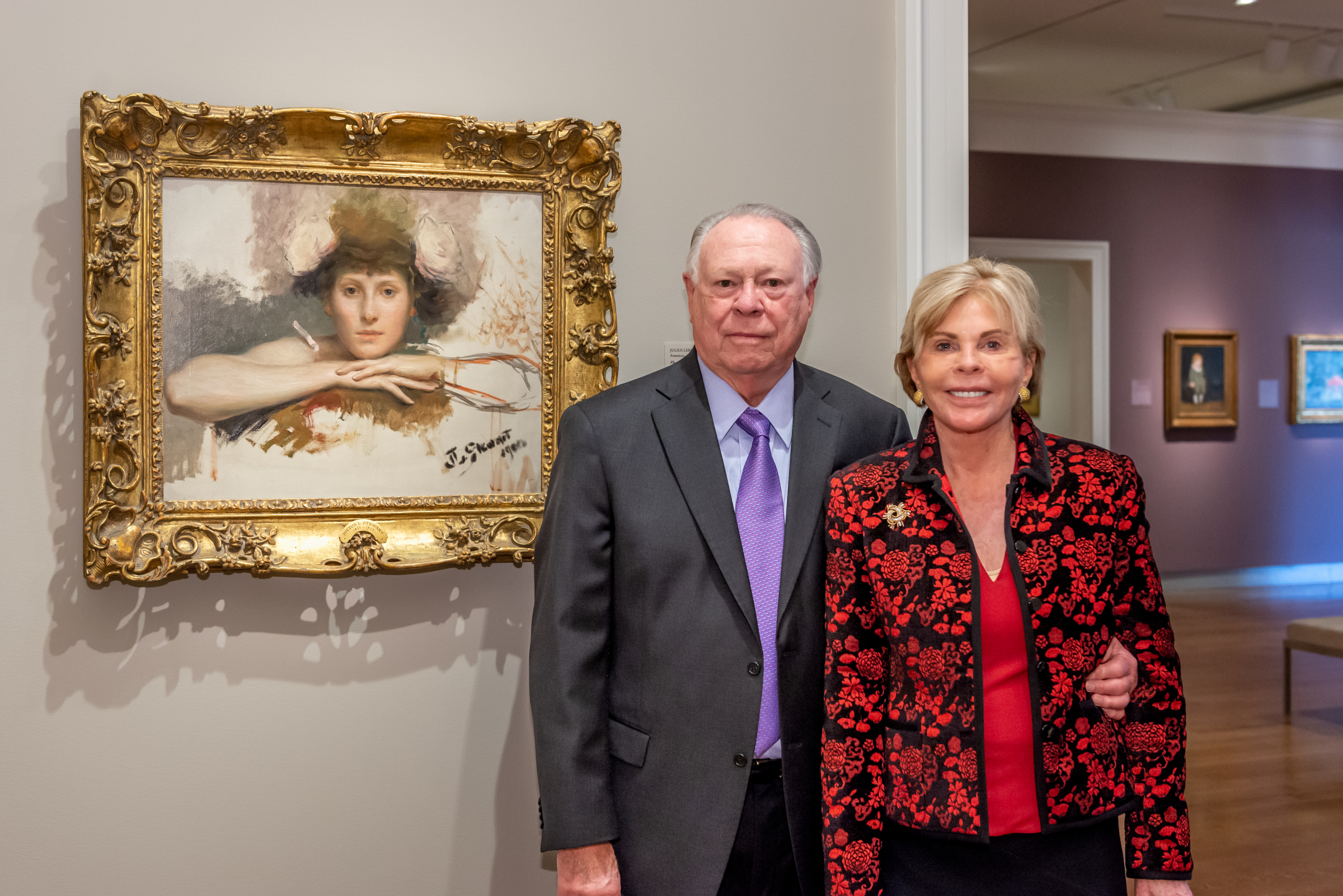 Richmond, Virginia — The Virginia Museum of Fine Arts (VMFA) announced today their receipt of a significant gift from longtime patrons James W. and Frances Gibson McGlothlin. With a total collective value of nearly $60 million, the donation includes a substantial contribution to VMFA’s expansion campaign, which will culminate in a second major wing at the museum named after the couple — the James W. and Frances G. McGlothlin Wing II — as well as 15 remarkable paintings by prominent American artists.

The McGlothlins’ landmark donation is the lead gift and the largest private gift in the museum’s current expansion campaign with an impressive $57 million. “We’re immensely appreciative to Jim and Fran for making this incredible gift to the expansion campaign,” said Alex Nyerges, VMFA’s Director and CEO. “Their generous contribution supports our capital campaign, which includes the new McGlothlin Wing II, renovations and the expansion of our endowments, along with their substantial donation of important works of American art, will help the museum tell a more nuanced and complete story of the nation’s artistic contributions and ensure that these works will continue to be accessible to all Virginians.”

In June 2021, VMFA announced that the museum has undertaken an exciting $190 million expansion and renovation project, anticipated to be completed in Spring 2026. International architectural firm SmithGroup is charged with designing the 170,000-square-foot James W. and Frances G. McGlothlin Wing II, which will include galleries for American art, African art, 21st-century art and special exhibitions, as well as a special events space that can seat up to 500 people. The project also includes 45,000-square-feet of renovations to the existing building. The total expansion, estimated to cost $365 million, is the largest expansion and campaign in VMFA’s history.

“The Virginia Museum of Fine Arts has become one of this country’s premier art institutions — with one of the strongest American art collections in the U.S.,” said Jim McGlothlin. “We feel it is important that we share these incredible works of art from our collection with people from our home state of Virginia. Donating them to VMFA ensures that they will be enjoyed by visitors to the museum for generations to come.”

“We are profoundly grateful to the McGlothlin family for this transformative gift of American art,” said Nyerges. “The 15 paintings will join the 75 works the McGlothlins previously donated to the museum and will enhance the VMFA’s already impressive collection of more than 2,000 works of American art.”

Since the first exhibition of works from their collection 16 years ago, Capturing Beauty: American Impressionist and Realist Paintings from the McGlothlin Collection, the McGlothlins have been generous contributors to VMFA. In 2005, the couple entrusted their expansive collection of 19th- and 20th-century American paintings, sculpture and works on paper — one of the leading private collections in this country — to VMFA, and made a $30 million gift toward the museum’s 2010 expansion which included the 165,000-square-foot James W. and Frances G. McGlothlin Wing. In 2012, the couple established the $20 million McGlothlin Endowment for American Art to support the preservation and growth of VMFA’s American art collection.

The McGlothlins have since decided to advance their donations of artworks to VMFA, first donating William Merritt Chase’s Wounded Poacher (1878) in 2009, followed by John Singer Sargent’s The Rialto (1909) in 2014. A year later, the McGlothlins gave an astounding 73 works of art, valued at $300 million, by George Bellows, Mary Cassatt, Childe Hassam, John Singer Sargent, James A.M. Whistler and other artists, which have delighted VMFA’s visitors since going on display in the summer of 2015. The gift was transformative, resulting in six new galleries of American art permanently installed with the McGlothlin Collection. Their gift was key to making VMFA’s current expansion necessary. The American galleries will double in size from the current 15,000 square feet to more than 30,000 square feet in the McGlothlin Wing II.

About the Virginia Museum of Fine Arts
The Virginia Museum of Fine Arts in Richmond, Virginia, is one of the largest comprehensive art museums in the United States. VMFA, which opened in 1936, is a state agency and privately endowed educational institution. Its purpose is to collect, preserve, exhibit, and interpret art, and to encourage the study of the arts. Through the Office of Statewide Partnerships program, the museum offers curated exhibitions, arts-related audiovisual programs, symposia, lectures, conferences, and workshops by visual and performing artists. In addition to presenting a wide array of special exhibitions, the museum provides visitors with the opportunity to experience a global collection of art that spans more than 6,000 years. VMFA’s permanent holdings encompass nearly 50,000 artworks, including the largest public collection of Fabergé outside of Russia, the finest collection of Art Nouveau outside of Paris, and one of the nation’s finest collections of American art. VMFA is also home to important collections of Chinese art, English silver, and French Impressionist, Post-Impressionist, British sporting, and modern and contemporary art, as well as renowned South Asian, Himalayan, and African art. In May 2010, VMFA opened its doors to the public after a transformative expansion, the largest in its history.

The Virginia Museum of Fine Arts has begun its $190 million expansion and renovation project led by the international architecture firm SmithGroup. Tentatively scheduled for completion in 2026, the project consists of adding a new wing of nearly 170,000 square feet and renovating 45,000 square feet of existing spaces, while maintaining 150,000 square feet of green space in the Sculpture Garden. Visitors will experience a seamless journey through the collections in the new wing, which will house contemporary art, African art, American art, a new suite of galleries for rotating special exhibitions, and a special-events space. The expansion and renovation will enable the museum to display more art, welcome more visitors, and provide more enjoyment.