Connect » In honor of Hanukkah 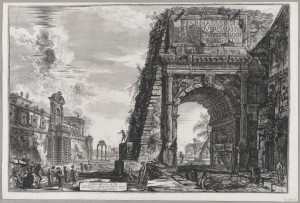 Though he was born near Venice, Giovanni Battista Piranesi is rightly most often associated with ancient Rome, whose glories he depicted in a series of etchings and engravings. Piranesi’s work as printmaker was multifarious. He produced both real views and imagined views (Capricci). Of the latter, the most famous are the Prisons (Carceri,1749-50), hallucinatory views of grandiose, menacing interiors. Piranesi began producing real views of ancient and modern Rome in the 1740s. His main publications, Views of Rome and Antiquities of Rome, present that city’s ancient monuments in overwhelming grandiosity and splendor despite their ruined state. These images were seminal in the pre-romantic cult of ancient ruins, which became a fashion in the Enlightenment. The View of the Arch of Titus, clearly shows both the grandeur Piranesi saw in the ruins of ancient Rome and the “magnificence” he sought in rendering them.

The work was recently acquired as gift from print collector Frank Raysor not only for its importance as a work of art in itself, but because it clearly shows the relief with the scene of the Plunder of the Temple – the Temple of Jerusalem being one of antiquities curator Dr. Peter Schertz’s main area of interest. 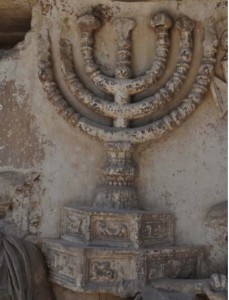 The Menorah as depicted on the Arch of Titus

The Arch of Titus is one of the best preserved and impressive buildings to survive from ancient Rome. Among the objects depicted on the arch is the seven-branch menorah taken to Rome after the sack of Jerusalem in 70 CE by the future emperor Titus. This may be the very menorah that plays such a crucial role in the story of Hannukah, the Jewish festival of Lights, that begins this evening on the 25 of the Jewish month of Kislev. In Jewish lore, after the Hellenistic king Antiochus IV was driven from Jerusalem, there was only enough sacred oil for the Temple menorah to burn a single day, yet, somehow, that oil continued to burn for eight days, until new oil could be sanctified.

-Mitchell Merling, Paul Mellon Curator and Curator of European ArtThe Arch of Titus’ depiction of the Menorah is the basis of the state seal of modern Israel, but in the past it was also used by Christians as the symbol of the supposed transfer of divine authority from Jerusalem to Rome. Today, a new research project led by Steven Fine of Yeshiva University and co-directed by Bernard Frischer of the University of Virginia and VMFA’s own Peter Schertz, has discovered that the depiction of the menorah on the Arch of Titus was originally painted yellow, a visual parallel to ancient reports that the menorah was made of gold. The ultimate aim of this research is to create a 3-D digital model of the entire Arch of Titus and examine the arch for traces of the ancient pigments used to color it. We can’t yet offer you a preview of our reconstruction, but we can give you a sneak peak of the newest photography of the Menorah panel.
-Mitchell Merling, Paul Mellon Curator and Curator of European Art