Rachel Lambert Mellon, nicknamed “Bunny,” died on March 17 at age 103. A longtime supporter of the Virginia 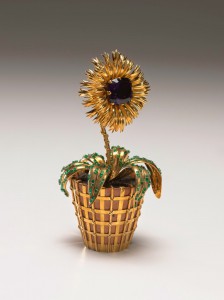 Museum of Fine Arts, Mrs. Paul Mellon contributed substantially to VMFA’s permanent collection with donations of the jewelry and objects d’art she commissioned from Jean Schlumberger. In memory of Mrs. Mellon, Flower Pot, a Schlumberger work in amethyst, emeralds, diamonds, black-garnet ore, terracotta, and 18-, 20-, and 22-karat gold, is now on display in the Mellon Gallery (2nd level). A fascinating work, Flower Pot includes a terracotta pot from Mrs. Mellon’s garden and a detachable jewel in the center of the sunflower, which can be worn as a brooch.

VMFA exhibited the Flower Pot and other Schlumberger works in The Jewels of Jean Schlumberger exhibition, which was on view from July 30, 2011 to March 18, 2012.

Paul Mellon credited his wife for inspiring his interest in French art, and together the Mellons gave a portion of their collections (including nine rare wax sculptures by Edgar Degas) to the museum, to be installed in the 1985 West Wing . Many of the works include flowers, gardens, and the French countryside, all subjects with particular meaning to Mrs. Mellon. Through their historic gifts to the Virginia Museum of Fine Arts, Mr. and Mrs. Mellon not only expanded VMFA’s collection of French art but also helped make VMFA the museum it is today. Read Mrs. Mellon’s obituary in the Washington Post.