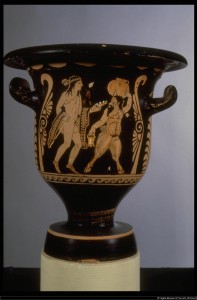 Three new pedestals have magically appeared in the Classical Art Gallery, each holding magnificent examples of Greek art. Together with a case featuring Geometric and Archaic art, these pedestals give the gallery a chronological spine in the form of a survey of Greek pottery from the 8th through the 4th centuries BCE.

The first pedestal holds work from the initial phase of Black Figure pottery, when artists were especially active in centers such as Corinth, Laconia, and Rhodes. One of the many star pieces in this case is a wine pitcher from Rhodes in the wild-goat style featuring a frieze of – you’ll never guess – WILD GOATS!

The second pedestal highlights one of the great moments in Western art – the period from about 580 – 430 BCE, the high point of Athenian vase production. In the 6th century BCE, Attic artists refined the Black Figure technique to create monumental scenes, such as the warrior departing for battle on an amphora in this case or a delicately rendered, small-scale panther by one of the “Little Masters.” By the end of the 6th century, most Attic artists worked in the Red Figure technique. One of the most accomplished artists in this technique was the Berlin Painter , who depicted isolated figures on a ground line. On one side of VMFA’s Berlin Painter amphora, the god Apollo holds a lyre and pours a libation over an altar – you can even see the stream of purple wine as it falls from his phiale (cup); on the other side, Artemis, Apollo’s twin sister, holds a pitcher and strides forward, perhaps to refill the phiale.

The third pedestal features works created in the Greek colonies of South Italy, a region often called “Magna Graecia,” literally “Big Greece” because it was larger and wealthier than the Greek mainland. The case has one of my favorite vases in the collection, a work that charmed me while I worked on my dissertation. It was created in the city of Paestum in the 4th century BCE and on it shows a small, rather stout, Pan (a demi-god follower of Dionysos, not the Great God Pan) carrying an aryballos on his head (with a ring on his finger!) and a situla – a pail – in his other hand. Dionysos, the god of wine, theatre, and untamed nature follows the pan, holding a thyrsus (a staff surmounted by a pine cone and tied with fillet; Dionysos and his followers often carry such staffs, which they occasionally used as weapons) and a phiale.
– Dr. Peter Schertz, Jack and Mary Ann Frable Curator of Ancient Art