Connect » Uncovering the culture of Qin and the First Emperor Yesterday, I introduced Richmond journalists to many of the partners who have loaned their work, knowledge, and resources to VMFA to help us best present the Qin story to our visitors. These interactions also underscore how our exhibition and the related Terracotta Army catalogue are generating new scholarship in this field.

Our first stop was the Beilin Stele Forest Museum, which features steles, or monuments, from the Qin, we sat down with Zhang Weixing, Archaeologist of the Terracotta Army Museum and Mausoleum. He spoke about the agency’s efforts to promote the local culture and heritage of the region, and how it collaborates with museums abroad. The museum is lending photo rubbings of the Qin steles for the VMFA exhibition. The artifacts that travel to organizations such as VMFA are priceless and reflect an important era in Chinese civilization. Zhang Weixing and his colleagues want to ensure the safe transportation and display of the objects in their care, and they want to know that we are presenting these relics and artworks in ways that accurately tell the Qin story.

When you walk into the burial pits where the Terracotta Army excavations are ongoing, the site takes your breath away.

And when you’re the only visitors in that sacred space for two full hours before the museum opens to standing-room-only crowds, you’re also humbled. Just 30 feet in front of us stood the Terracotta Army, thousands of hand-carved statues of warriors, military leaders and horses. Located in three pits near the tomb of the First Emperor, the army was created to protect the Qin leader, who developed this complex mausoleum as part of his quest for immortality.

And ten of these life-sized figures have traveled to Richmond, where they are on display in Terracotta Army: Legacy of the First Emperor of China through March 11. Never have we experienced quite a level of buzz as this exhibition is generating throughout the Commonwealth. People recognize the Terracotta Army, and they’re excited for this this once-in-a-lifetime opportunity to see them in their own backyard.

To say this is one of the most important archaeological discoveries of the 20th century is an understatement.

Imagine this: In 1974, farmers outside of Xi’an were simply digging a well, when they unearthed pottery shards and bronze arrows. That could have easily been the end of the story, but further excavation revealed the Terracotta Army, about one mile from the burial site of the First Emperor. The discovery made headlines around the world, and a 2,200-year-old king and culture became an overnight sensation.

We also received an extended tour of the Museum of the Terracotta Army of the First Emperor of Qin, where people have been making pilgrimages since the museum opened to the public in 1979. The archaeological site covers three pits, situated to the east of the tomb, perhaps to protect the First Emperor from uprisings in lands he had conquered: 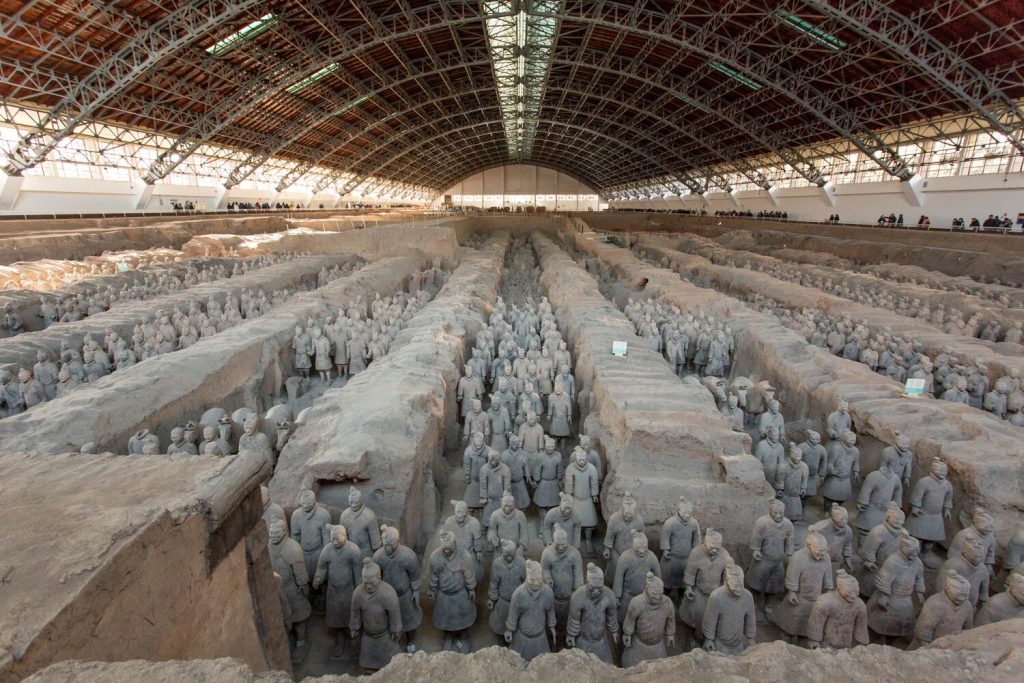 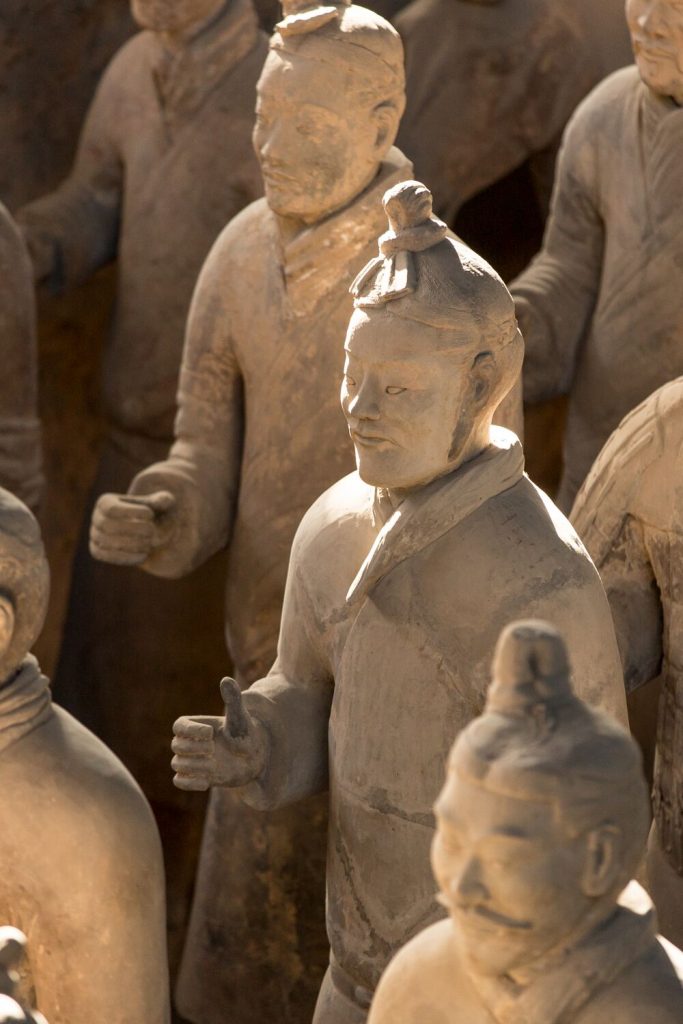 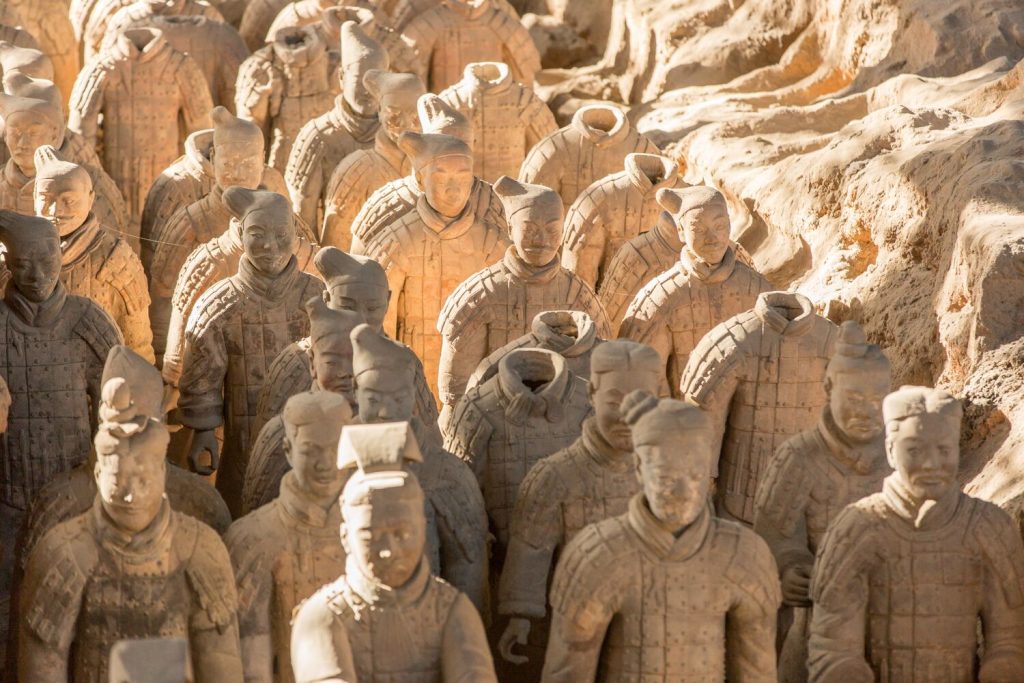 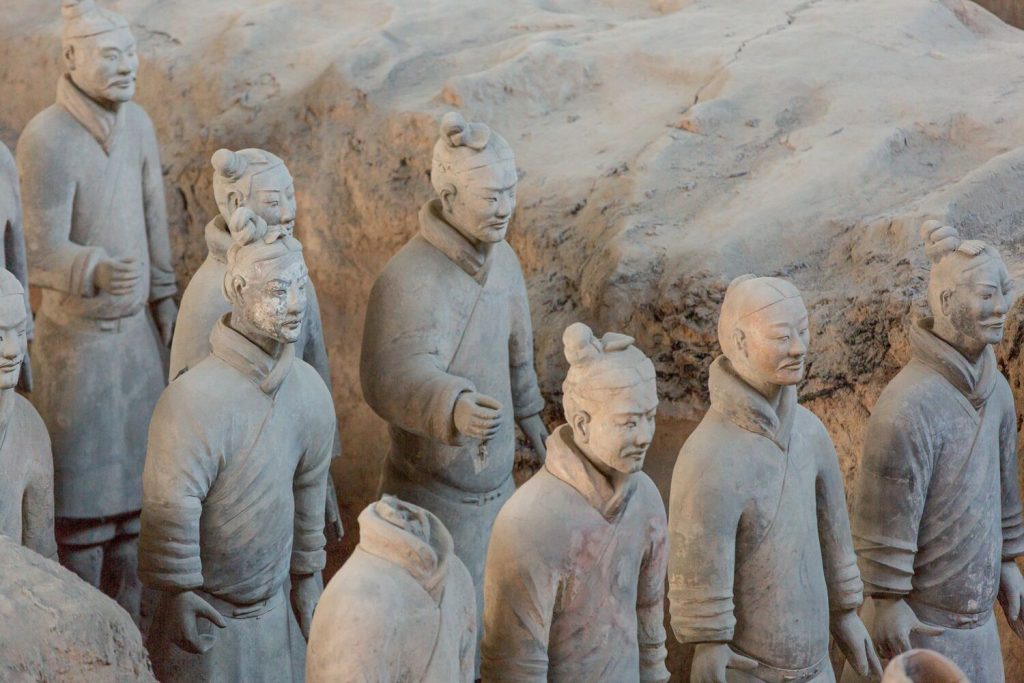 While there are some similarities in faces, hairstyles, attire and functions, not one warrior is a mirror image of another. The military leaders might be a little taller, and their weapons vary. Each artist finished off his sculpture by carving his name into the figure. Many of the estimated thousands of figures have not yet been excavated.

The warriors are part of an elaborate underground complex featuring the largest tomb site in China. Ritual structures, an imperial palace, armory, entertainment area, stables, and a garden pond with nearly 40 bronze birds form the mausoleum that embodies the Emperor’s desire for eternal life.

Perhaps this elaborate preparation for eternal life should be expected from an innovative Qin leader. If he was forward-thinking enough to establish new political paradigms, infrastructure standards, and unify a nation, then we can’t be surprised that he applied that same detail in planning his quest for immortality. He also didn’t waste time; he put people to work in this complex almost as soon as he became king of Qin in 246 BC. Our final stop of the day was dinner at De Fa Chang Dumplings restaurant, where we enjoyed a variety of dumplings, which are a significant part of Chinese cuisine.

To this day, the tomb of the First Emperor remains untouched, with no plans to interrupt the sanctity of his final resting place. Yes, more answers—and new sets of questions—would come from excavating the burial site, but China’s decision to respect the tomb is admirable. The mausoleum complex took more than 38 years to construct, yet the Qin dynasty collapsed only three years after the First Emperor’s sudden death. The mausoleum complex provided an integral piece of the development of our exhibition. Indeed, most objects on view in Terracotta Army originate here.

For additional information and exhibition tickets: Terracotta Army: Legacy of the First Emperor of China.