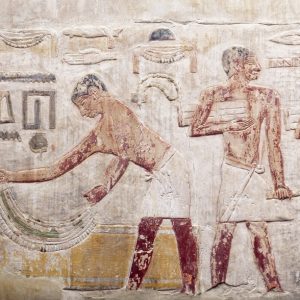 Before you begin your exploration, take a few minutes to think about these questions:

Egypt and the Nile

Egypt is the home of one of the world’s earliest civilizations! More than five thousand years ago, this great civilization began to take shape in the northeast corner of Africa.

This image of Egypt was taken by a satellite in space. Take a few moments to look closely and think about the following questions before you read the information below.

Ancient Egypt was surrounded by natural borders: deserts to the east and west and the vast Mediterranean Sea to the north. The Egyptians lived along the Nile River, which flowed north to  south. The Nile River flooded every year, bringing rich dark soil that was ideal for farming fruits, vegetables and wheat. The Egyptians called their land kemet, which meant black land, after that fertile dark soil.  The Nile was the source of life for the ancient Egyptians. This cycle of flooding, crop growth, death, and regrowth helped define many aspects of daily life, including the calendar, work, transportation, food, and religion.

Egyptian society was organized in a hierarchy, meaning that people were ranked based on their job and wealth. At the top of the hierarchy was the king, sometimes called the pharaoh. The job of the king was to maintain ma’at, a word meaning truth, order, and balance. To do this, the king made laws, fought against foriegn invaders, and built temples for the gods. Under the king were his chosen advisors and priests who helped him in his quest for balance. The rest of the people had jobs such as farmers, carpenters, fishermen, sculptors, and countless others. Everyone in Egyptian society was important and valued because they were all a part of ma’at.

Click on the pop-up hot spots on this relief to learn how the king kept balance between humans and the gods. Then, think about these questions:

What today might be just considered art was originally created to serve many different purposes in Egyptian life. Many objects, carvings, and paintings had religious or magical functions. Ancient Egyptian art reveals beliefs about the world and the ancient Egpytian’s attempts to understand it.

The Egyptians were one of the first cultures to invent writing. They used symbols called hieroglyphs for sounds, words, and ideas. There are over seven hundred hieroglyphs! The ancient Egyptians called their writing medu-netjer, which means “words of god,” because they believed that the god Thoth invented writing.

Ancient Egyptians believed that after people die in this world, they continue living in another world. Bodies were preserved, or protected, through mummification, a very long and expensive process that not everyone could afford. Mummies were wrapped and placed in coffins and buried in tombs or graves. Magic spells and special instructions were often written in hieroglyphs on coffins and in tombs to offer protection and ward off evil. Protective amulets, similar to lucky charms, were also sometimes wrapped with the mummy.

Click on the pop-up hot spots to learn about this coffin and the person it belonged to. Then, think about these questions.

In the afterlife, the dead still required objects from their daily life. Objects such as vessels for storing food, sandals, and even games were placed with the dead for use in the afterlife.

Nubia was a region of Africa located south of Egypt in what is now the country of Sudan. Long ago Nubia was the home of the Kingdom of Kush. Like the Egyptians, Nubians lived along the Nile River, growing such foods as grain, peas, lentils, and dates. In the desert areas, they mined carnelian and other precious stones as well as metals such as gold. The Kushites traded these resources with the Egyptians for grain, vegetable oils, wine, beer, linen, and other goods. The Kushites and the Egyptians were sometimes peaceful and sometimes hostile neighbors. From 760 to 656 BC, the Kushites ruled Egypt, and King Senkamanisken ruled Kush soon after this time.

The influence these two cultures had one each other can be seen in art, like this statue. Click on the pop-up hot spots to learn more about the statue and use it to answer these questions.

Egypt is in Africa

Although the Sahara Desert separated ancient Egypt from the rest of Africa, the people of this multicultural continent traded with each other across long distances and shared many common ideas and beliefs.

Click on the pop-up hot spots on this map of Africa to see different objects from the VMFA collection.

Egyptomania, or “madness for Egypt,” describes the fascination that has inspired artists and architects from other cultures to create works of art, fashion, and buildings that look like they might have existed in ancient Egypt. 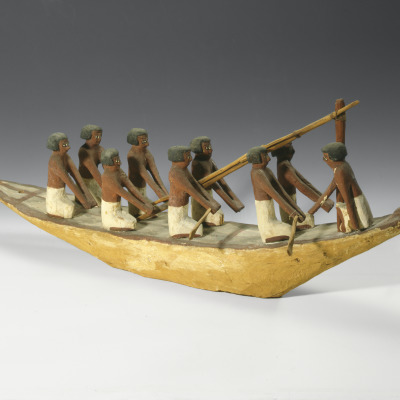 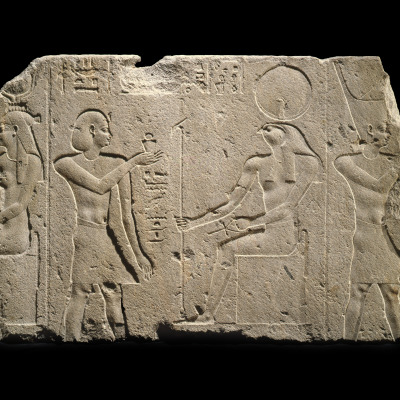 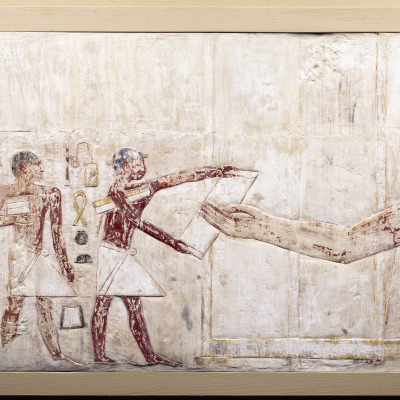 Fragment of a Mythological Papyrus Scrol... Coffin and Mummy of Tjeby 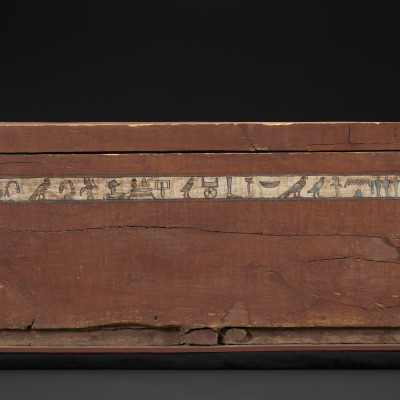 Statue of Senkamanisken, King of Kush 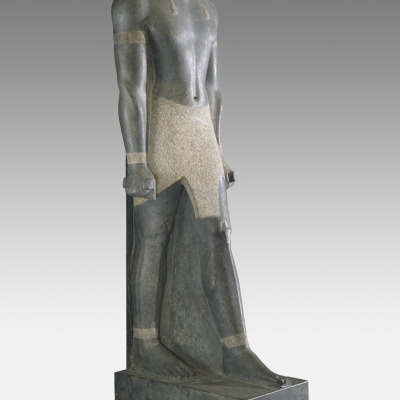