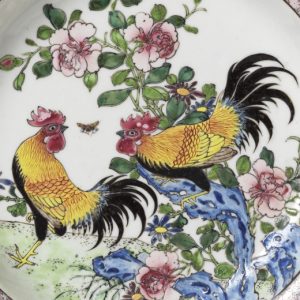 Share this background information with students before your Distance Learning session.

Why look at plates and vases?

When visiting a relative or a fancy restaurant, perhaps you have dined on “fine china.”  While today we appreciate porcelain dinnerware for the refinement it can add to an occasion, this conception is founded on centuries of exchange between Asian and Western markets.  Chinese porcelain production has a long history of experimentation, innovation, and inspiration resulting in remarkably beautiful examples of form and imagery.  At the VMFA, you will examine objects from a small portion of this history — the 18th century during the Qing Dynasty — to expand your understanding of global exchange in this era.  Because they were made for trade outside of China, these objects are categorized as export porcelain by collectors and art historians.

Review the background information below, and think of a few answers you want to look for when you visit VMFA. 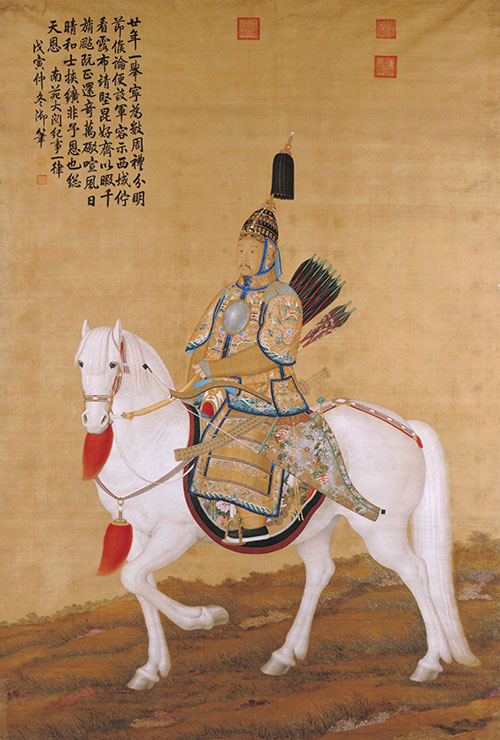 Around the end of the 16th century, a Jurchin leader named Nurhaci (1559–1626) brought together various nomadic groups who became known as the Manchus.  His forces quickly conquered the area of present-day Manchuria, and his heirs set their sights on China. In 1636 the Manchus chose the new name of Qing, meaning “pure,” to emphasize their intention to purify China by seizing power from the Ming dynasty. By 1683, Qing forces had conquered the remainder of China and established a dynasty that endured until 1911.

The Qing rulers adopted many aspects of the traditional Confucian-based Chinese bureaucracy, including the imperial examination system, but they were also careful to make various adjustments to ensure their ultimate control of the administration. Qing officials made Neo-Confucian philosophy, which emphasized obedience of subject to ruler, the official state doctrine.

Between 1661 and 1795, the Qing Empire was ruled by only three emperors, Kangxi, Yongzheng, and Qianlong. This long period of stability and prosperity resulted in a golden age for China. The borders of the empire were gradually expanded to include large areas of Central Asia and Tibet, which kept the dynasty safe from nomadic invasions. These emperors also supported Chinese arts and culture. Emperors and court officials alike became patrons of painters, calligraphers, poets, and artisans.

By the end of the Qianlong emperor’s reign in 1799, troubles began to darken the Qing golden age. The unparalleled increase in population began to strain the limits of Chinese food production. This shortage was coupled with inflation and financial instability. To make matters worse, the Qing policy of isolation from the Western world was sorely challenged. Beginning in the mid-18th century, Western trade was only allowed in Guangzhou (Canton) and had to be arranged through state-licensed merchants organized into a guild known as the Cohong (hong means “business”). The British sought to change the Cohong system because they wanted to market the products of their newly industrialized economy.

By the beginning of the 17th century, Portuguese and Dutch traders were bringing chests full of tea into European ports. The first tea cargo to reach England came by way of Dutch ships in 1645. By the middle of the century, the British East India Company began importing Chinese tea to England. At first, it was mainly enjoyed by aristocrats. Catherine of Braganza, the Portuguese queen consort of King Charles II, introduced tea to her court after their marriage in 1662. The novel beverage soon spread to every level of society, becoming a popular choice in the new tea houses, which catered to the middle classes. Between 1720 and 1834, annual British imports of Chinese tea rose from 14,000 to 400,000 tons. Tea alone made up more than a third of the goods that Britain imported from China.

As a cargo, tea was accompanied by a product that was both a related commodity and a useful aid in shipping. The porcelain produced in China was shipped to Europe with the tea, providing additional ballast to stabilize the ships.  Placed at the bottom of ship holds, it also acted as a protective layer underneath the tea, shielding it from damp and odor.

Mass-produced in Qing dynasty factories like those at Jingdezhen, Chinese porcelain was in demand in Europe and the object of much fascination.  Indeed, in many European homes, porcelains were displayed in cabinets or on chests and mantels–often in groups or in pairs. A garniture of five pieces, such as this group at right, is perhaps inspired by the “five offerings” displayed on altars in Chinese temples.

Porcelain objects, made by Qing artisans for Europeans, can be regarded as points of economic exchange between East and West.  As we shall see during your visit to the VMFA, they may also be understood as points of cultural exchange.  Techniques for making and decorating porcelain were shared as a result of the porcelain trade, and images on many examples evidence the growing understanding of each culture by the other.  We can therefore consider these objects as material culture, the study of which can help us expand our understanding of the past.

Porcelain: a strong, vitreous (glass-like) type of ceramic that is made from kaolin (a fine white clay rich in aluminum silicate). It is shaped and fired at 1250° – 1400°.  It is hard, brittle, white, and translucent when held up to the light.

Glaze: the glassy surface layer of a ceramic item.  Porcelain objects do not need a glaze to make them impermeable, but glazes add luster and shine to the surface.

Flux: an ingredient used to promote fusion by lowing the melting point of a substance.

Enamel colors: Pigments mixed with a glass flux, painted over a pre-fired glaze, and then fired again at lower temperatures.  The pigments are derived from metallic oxides such as cobalt blue, iron red, or copper green.

Famille Rose: A European name meaning “the pink family” given to Chinese porcelain wares whose decoration is dominated by a rose-pink color.  This enamel color was achieved by adding lead-based white pigment to colloidal gold. The Chinese term for this type of porcelain was pronounced yangcai (foreign colors).

Biscuit: Ceramic ware after its first firing without glaze.

Ballast: A heavy material placed in the lowest portion of a vessel to improve stability.

Canton: English name once used for the Chinese port city of Guangzhou.  It is located in south-central Guangdong Province, north of the Pearl River Delta which feeds into the South China Sea.

Export Porcelain: Term used to categorize the porcelain wares made and decorated in China for foreign rather than domestic consumption.

Garniture: A set of like, though not necessarily identical, decorative objects which are displayed as a group.

Jesuit Missionaries:  Around 1600, Jesuit missionaries sought entrance into China. Impressed by their learning, Chinese emperors welcomed the Jesuits as advisors to the imperial court for the next 150 years. Jesuit enamel specialists like Jean-Baptiste Gravereau, introduced the technology to Chinese imperial artisans.  It was from another Jesuit, Father Francis Xavier d’Entrecolles, that Europeans first learned in detail about porcelain manufacture in China.

Jingdezhen: the premier imperial porcelain manufacturing city in Jiangxi Province.  The factory established by the Ming dynasty in 1392 was the official supplier to the court.  In the Qing dynasty, the Jingdezhen potters introduced enamels from the West and further developed their skills in material selection and temperature control. At Jingdezhen, porcelain was mass-produced for domestic (Chinese) and foreign consumers using a production line system.

Material culture: A way to describe any physical item that is created by a society.  Material culture can help historians and anthropologists better understand the past.

Ming Dynasty: Founded by Zhu Yuanzhang who overthrew the Yuan (Mongol) Dynasty.  The Ming ruled China from 1206–1368 and were succeeded by the Qing Dynasty. In the early 16th century, European traders began to arrive in Chinese ports, hoping to profit from China’s sought-after goods. At first, the Ming administration resisted their efforts, but by 1557 they granted the Portuguese the right to trade in Macao. In 1565, the Spanish also began trading with China from their base in Manila. China was soon the richest nation in the world as silver from the Spanish colonies flowed into the economy. 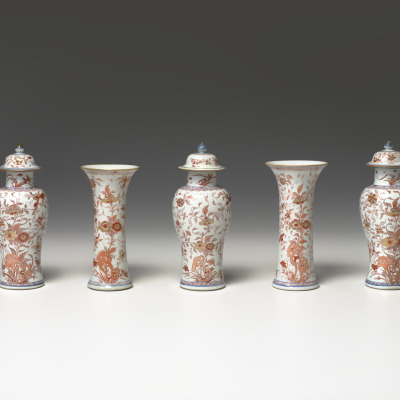 Plate with Roosters amid Peonies and Roc... 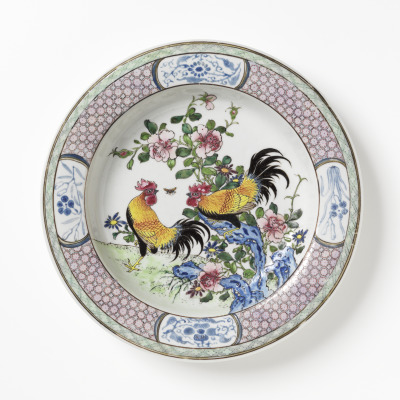 Plate with Arms and Scenes of London and... 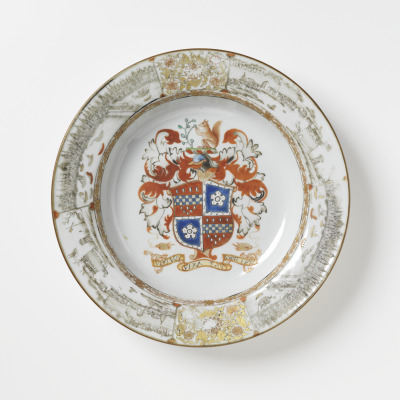 Plate with Scene of Doctors' Visit 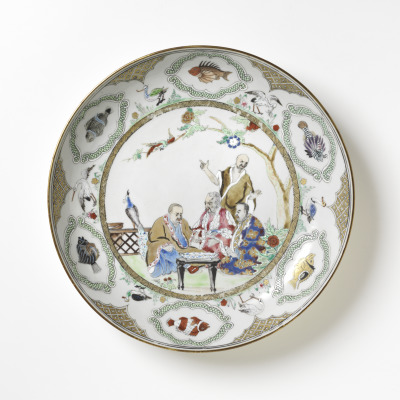 Pitcher with Designs of Male's Head and ...