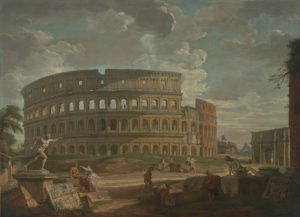 Thinking about the Colosseum!

Let’s learn about the Colosseum, a famous building constructed in ancient Rome that is still visited by millions of people almost every year. The Colosseum became so famous that travelers to Italy in the 1700s bought paintings like the one pictured (at left) to take home with them.

Thinking about the Colosseum!

Thinking about the Colosseum! was developed as a supportive resource during 2021 Virginia Inquiry Design Collaborative. A team of elementary teachers taking part in the collaborative asked the three questions below to help third-grade students think about more than architecture as they learn about the Colosseum.

The Dropdown Menu will take you to: the three main sections, information about the Virginia Inquiry Design Collaborative, and a list of sources. The finished inquiry  offers the complete plan for the inquiry, including additional resources, assessment suggestions, and concluding activities. This inquiry is scheduled to be published in summer 2022, but many inquiries including What Stories Should Statues Tell about Ancient Rome? are already available on the #GoOpenVA website.

Begin your adventure by clicking through the slides below. You'll be able to export your text when you reach the last slide.

Why did the three FLavian emperors go to so much trouble and spend so much money to build the Colosseum?

Vespasian became emperor after a time of great unrest. A very cruel emperor named Nero died in 68 AD (CE). During the following year, four men fought a terrible civil war over who would rule next.

The page from the illuminated manuscript that appears below tells us that Vespasian had been sent to Judea by the Emperor Nero to put down a revolt in 66. It was while he was there that Nero died and three other military leaders began the terrible civil war. In July 69, Vespasian’s own army decided he should rule next, so he joined the fighting. He won the deciding battle in October and became emperor in December 69. 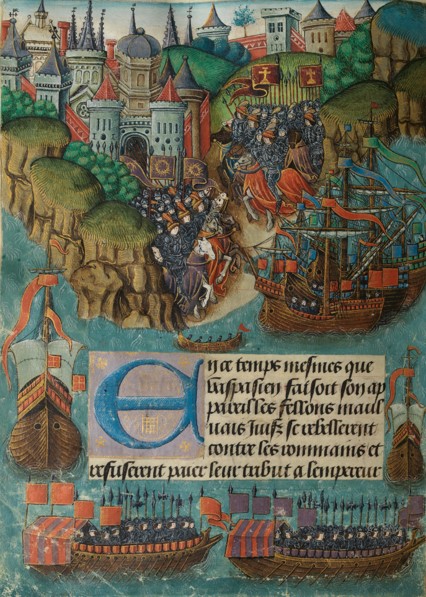 As the new emperor, Vespasian wanted to:
* show his importance and power,
* make sure that the people of Rome were happy, and
* reveal the power of the Roman Empire.

The coins that Vespasian had minted, including the silver denarius that appears below, were imprinted with his portrait. He is wearing a crown of laurel leaves, which became a symbol of the emperor under Augustus Caesar, who ruled as the first Roman emperor from 63 BC (BCE) to 14 AD (CE). 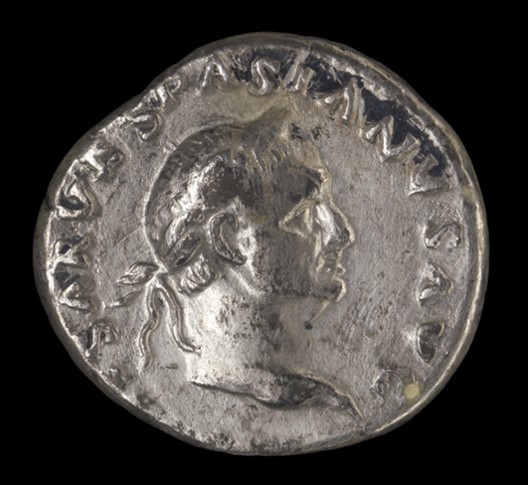 Vespasian repaired many damages caused by the civil war. He built temples and arches—and the Colosseum.

The Colosseum is 615 feet long and 510 feet wide. The outer wall, which is now partially missing, was 157 feet high!
How does it feel to look up at the outer wall of the Colosseum?
Can you measure a length of 99 feet on a playground or football field? 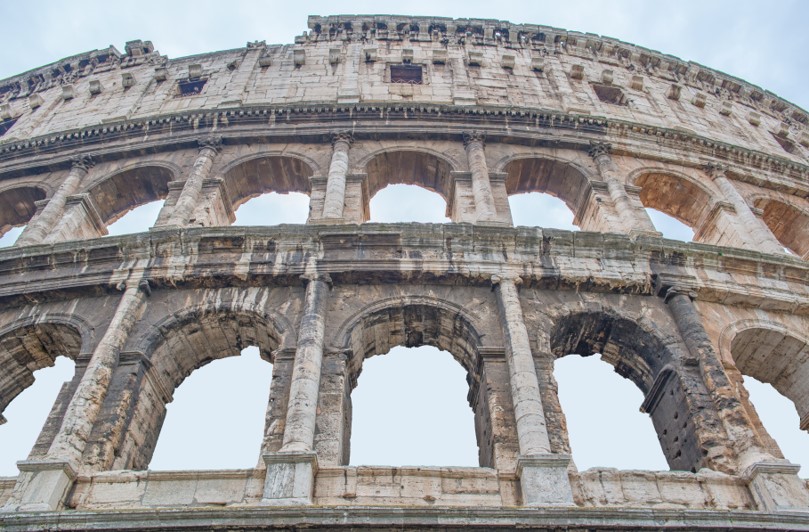 This painting of gladiators in the Colosseum (below) is by the French artist Jean-Léon Gérôme (1824–1904). He painted it long after the end of the Roman Empire, so it may not be completely accurate—but it does give us an idea about the structure of the building, the size of the audience, and some of the performers. Click on the hot spots to learn more.

Who Got the Best Seats?
The more important you were, the closer you could sit to the action taking place within the arena inside the walls.
Click on the hot spots to find out who sat where.
(Image: Public Domain)

Has the Colosseum had a positive impact on the world?

The Colosseum encouraged patriotism! When people came to the Colosseum, they watched entertainments that showed off the power and importance of ancient Rome and its vast empire. They could take pride in being part of the Roman Empire.

Click on the hotspots below to find out how the Colosseum might have looked in ancient times.

Has the Colosseum had a negative impact on the world?

Let's consider the many lost lives, unequal punishments, and the spoils of war that paid for it. An estimated 400,000 people died during the 400 years that the Colosseum was used for public gladiatorial games.

A Million Animals Were Killed!
Scholars estimate that over a million animals lost their lives in the Colosseum, including rabbits, crocodiles, elephants, leopards, bears, tigers, hippopotamuses, wild goats, boars, dogs, lions, and deer.

When Emperor Titus opened the Colosseum, the games continued for 100 days—and 9,000 animals were killed.

The games in the Colosseum were enormously expensive!
Imagine how many lives could have been improved if the cost of a million animals had been used in other ways.

At the bottom of the broken glass beaker that appears below, can you see the yellow lion pouncing on a deer? 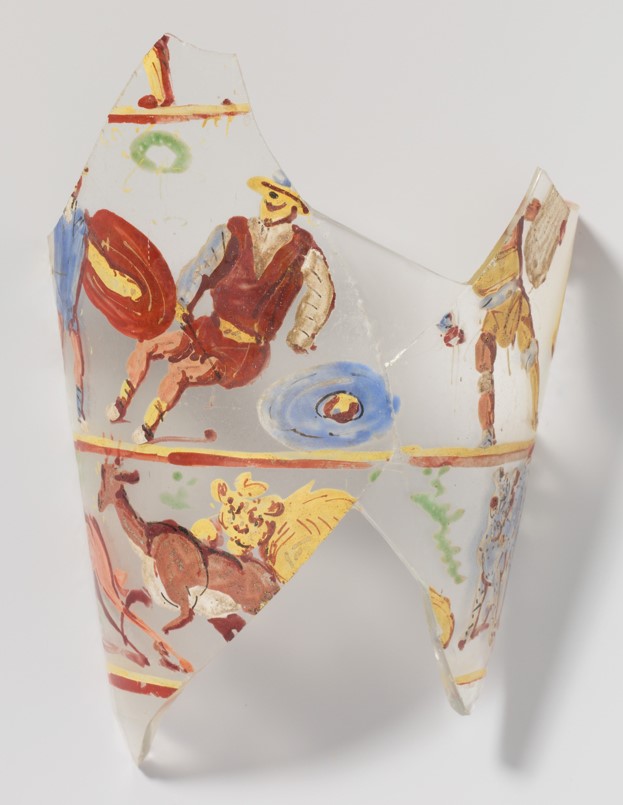 The Colosseum was paid for by the spoils of war and symbolized the supreme power of the Flavian Emperors. Click through the slides below to learn where the emperors got the funds to build the Colosseum.

About the Virginia Inquiry Design Collaborative

Thinking about the Colosseum! was developed during the 2021 Virginia Inquiry Design Collaborative project. It provides support for the inquiry developed for third-graders by a team of elementary teachers.

In this collaborative project, small groups of teachers utilized the Inquiry Design Model (IDM), a distinctive approach to creating curriculum and instructional materials that honors teachers’ knowledge and expertise, while focusing on the main elements of the instructional design process as envisioned in the Inquiry Arc of the C3 Framework. The C3 Framework (College, Career, Civic Life) is an inquiry-based framework for Social Studies education in which students are enabled to ask compelling questions, access disciplinary sources, and complete formative and summative tasks and exercises in taking informed action.

Each inquiry is designed to provide opportunities for students to develop their critical and creative thinking skills at appropriate developmental levels. Emphasis is placed on understanding multiple viewpoints and uncovering hidden stories. http://c3teachers.org/virginia-studies-pd/

The team that focused on the Colosseum included Katherine Gerry, Brooke Lloyd, and Chad Gangwer.

Flavian Triumph and the Arch of Titus: The Jewish God in Flavian Rome, Emily A. Schmidt, 2010, University of California, accessed 7-12-2021

Piranesi in Rome: Colosseum, accessed 7-12-2021
This website explores Piranesi’s Rome, as well as the ancient monuments that he portrayed with such passion. The endeavor represents a collaboration connecting the Art Department, the Davis Museum, Special Collections, and Wellesley’s Mellon-funded Blended Learning Initiative in support of the exhibit Reframing the Past:  Piranesi’s Vedute di Roma.  This exhibit showcases the museum’s growing collection of Piranesi’s etchings and was organized by Meredith Fluke, Kemper Curator of Academic Programs, and Kimberly Cassibry, Assistant Professor of Art, with the participation of Liza Oliver, Assistant Professor of Art.