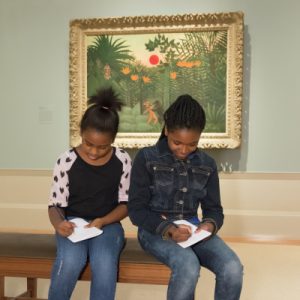 Use an artwork as a prompt for a haiku poem. This activity enables students to activate their imaginations, gives them a framework for connecting personally with art, and their critical observation skills.

Use or adapt the following as a prompt for writing a haiku.

under the piled-up snow

the sound of water.

Try writing a haiku about a work of art.  A template is below.