M.LiT » About Conservation » The Life of Louis Comfort Tiffany: From Painter to Decorator

Born on February 18, 1848 Louis Comfort Tiffany would become a master of his craft. Throughout his lifetime, the US Civil War occurred, the Victorian era and Industrial Revolution of America came and went, and many inventions were created that completely changed the standards of living. Despite the wars and quarrels, Tiffany lived through a relatively progressive era of America. As a child, his parents, Charles Lewis Tiffany (the founder of Tiffany & Co.) and Harriet Tiffany, sent him to the Pennsylvania Military Academy and later the Eagleswood Military Academy. After his graduation he declined the opportunity to go to college in order to start his journey as a professional artist. 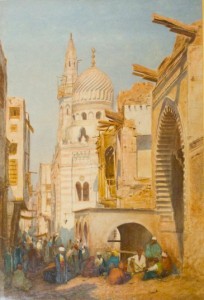 Before Tiffany was a genius decorator, he was a painter. At the same time, many artistic movements were ebbing and flowing such as the Arts and Crafts Movement, Aesthetic Movement, Art Nouveau, and many more. As a painter, he studied with the greats such as the landscape artist George Inness and Samuel Colman; Tiffany also took classes for drawing at the National Academy of Design located in New York. By 1867, he was beginning to exhibit his work at the National Academy. In 1868, Tiffany traveled around the world to places such as North Africa, Spain, and Paris. In Paris, he continued his studies with Léon-Charles Adrien Bailly; and met the French artist Léon- Adolphe-Auguste Belly. By having the means to travel the world, his artistic tastes would be greatly influenced by various cultures and atmospheres.

When Tiffany returned to America, he adopted the American Orientalist style¹, his paintings differed from other artists that were also working in this style. Like the painters Peter Paul Rubens and Claude Lorrain who were prominent during the Baroque period (period of art reflecting religious opinions between the 1600’s and 1700’s), what most inspired Tiffany was color and light. In an address to the Rembrandt Club of Brooklyn, he made his opinions vocal:

“When I first had a chance to travel in the east and to paint where the people and the building are clad in beautiful hues, the pre-eminence of color in the world was brought forcibly to my attention.”

In 1870, Tiffany was elected to the Century Club which at the time was filled with the hustle and bustle that came with being the center of culture in New York. At the time, Tiffany was the youngest member and due to this organization Tiffany would gain connections such as President Chester Arthur who would later commission him to decorate the White House.

“The Grand Illumination” by Peter Waddell (oil on canvas)

As an elected associate, Tiffany continued his membership with the National Academy. Ironically enough, even though he continued his membership, he was part of a rival group that sought to rebel against the selection policies for exhibitions of the National Academy. This was called the Society of American Artists. Also around this time Tiffany’s career in decorative arts began.

In 1875, Tiffany began to experiment with glass making techniques; he knew that “the fragility of glass does not interfere with a great capacity for beauty on its part.” He was bored with the techniques being used at the time, calling them too cold and too formal. Tiffany wanted to mimic and even transcend the skills of Medieval stained glass producers. His understanding was that when glass was refined with the metal oxides removed, it made the glass “uninteresting.” Glass makers would later use metallic oxides to develop a variety of colors for Tiffany glass.

In 1892, he established the Tiffany Glass & Decorating Company. In his studio, he had many artists at work and was not always directly affiliated with the creation of pieces, he did oversee each stage of production. A year later he would begin to become an internationally renowned artist, his pieces displayed in the World’s Columbian Exposition of 1893. In 1902, the year of his father’s death, he would become the co-director of the Art Department in Tiffany & Company. Tiffany would later retire at age 71 and establish the Louis Comfort Tiffany Foundation at Laurelton Hall. His goal was to steer artists towards a different path, away from the contemporary movements that young artists were experimenting with, on such as modernism. He would live out the rest of his life with this uneasiness towards Contemporary art. On January 17, 1933, Louis Comfort Tiffany died. Tiffany’s effects on the art world were prominent; his works put America on the map and his glass techniques revolutionized the world of stained glass.

¹ The American Orientalist movement was inspired by areas in the Middle East, Greece and North Africa. This included genre paintings (paintings displaying domestic life), propaganda pieces (in support of French Imperialism), and the popular depiction of harems (section of household reserved for women). 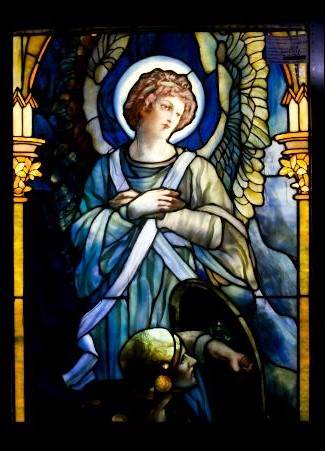