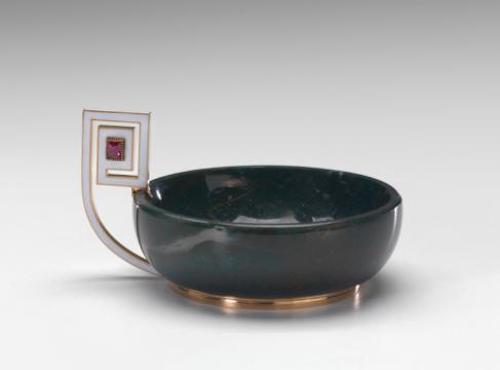 Native American Art: The Robert and Nancy Nooter Collection, Temples and Shrines in Japan: Woodblock Prints by Kawase Hasui, and The Jewels of Jean Schlumberger

More than two years ago, Virginia Museum of Fine Arts Director Alex Nyerges proposed to his curatorial staff a special collection-building effort to mark the museum’s 75th anniversary year in 2011 – 75 gifts of art for 75 years of VMFA history. The goal was surpassed and the museum received 235 gifts throughout the year.

“Our curators rose to the challenge,” Nyerges said. “They cultivated new relationships with donors and negotiated promised gifts and key gallery loans into donations. Under Chief Curator Sylvia Yount’s leadership, their efforts eclipsed the original goal and added to our already stunning permanent collections.”

These gifts come from long-time supporters of the museum, including current and past VMFA trustees and foundation directors, as well as new local patrons and nationally known collectors. Collectively, they made 2011 a banner year for donations to VMFA’s collections.

The so-called “gift initiative” celebrates the distance the museum has traveled from its January 1936 opening, in the depths of the Great Depression, to the May 2010 unveiling of its fifth and largest expansion, the award-winning McGlothlin Wing designed by Rick Mather + SMBW. VMFA remains an ambitious private-public partnership that owes its strategic growth to generations of magnanimous patrons and collectors as well as talented staff.

This 12th century cross marks a new dimension of VMFA’s African collection – Christian art of the Ethiopian Church. The cross was given by Robert and Nancy Nooter, benefactors whose many gifts of art from Africa have significantly helped build the museum’s holdings. The cross is among some 40 Ethiopian works to be acquired by gift and purchase from the Nooters – paintings, scrolls, illuminated manuscripts, crosses, and other liturgical objects – which will establish VMFA as a leading institution in this area of art history. Started in the 4th century, the Ethiopian Church is the largest of the Oriental Orthodox family of churches, with some 45 million members. The artisan who made this work skillfully manipulated and detailed the iron to create elegant, lacy openwork both surrounding and within the body of the cross. The slender stem made the cross easy for a priest to hold during a service. Perhaps the quintessential Ethiopian ecclesiastical object, crosses were crafted in wood, brass, silver, and iron in a wide range of styles and designs, some geometric and ornate, others bearing imagery in low relief or etched into the surface. As with much African art, these religious works were continually used and handled and, therefore, bear evidence of centuries of wear testifying to the meaningful role they played in the practices of the faithful.

Better known for his later association with the “Ten,” a group of loosely defined American impressionists, Julian Alden Weir began his career working in a more dramatic realist style. In works such as Anna, which evokes lessons learned in Europe, Weir emulated the black-on-black bravura painting of Frans Hals and Edouard Manet that appealed to many progressive American artists. An avid collector of Japanese and colonial American artifacts, Weir married into an old Connecticut family. The portraits he made of his wife, Anna Dwight Baker, in pseudohistorical garb may be understood as testaments to her patrician identity as well as self-consciously decorative productions. In this example, Weir captured the elegant reverie of his young wife as a contemplative Priscilla Mullins, whose life in the first years of the Puritan Plymouth Colony was romanticized in verse by Henry Wadsworth Longfellow during the post-centennial era.

This generous donation by the museum’s long-term patron and board member, Jane Joel Knox, marks VMFA’s 75th anniversary. Not only does the gift greatly enrich the Colonial Revival display in VMFA’s suite of American Art galleries, but it will be a special feature of the museum’s 2015 exhibition American Colonial: Past as Present, the first comprehensive multimedia investigation of the United States’ most enduring cultural phenomenon.

This intricately woven basket was presented to Reverend John Hannon, pastor of a church in Ukiah, California, by members of the Pomo tribe around 1897-98. It was a gift of thanks to Dr. Hannon for performing a marriage ceremony between a man and woman of the Pomo tribe. After the doctor returned to his home in Richmond, he passed the basket on to his daughter Helen, who then gave it to her friend, Katherine Wallace. Mrs. Wallace felt that the best place for such a special example of Native American art was the Virginia Museum of Fine Arts, and she graciously offered it to the museum’s permanent collection.

Kunii Ōyō (1868-1923), a Japanese landscape painter, was interested in scientific studies of botany and birds that inspired him to sketch directly from nature rather than from his imagination. In this painting, the artist depicts a winter landscape featuring snow-covered rocks surrounded by flowering plants and birds. The painting reveals Ōyō’s mature artistic style that combines naturalism and stylization, a prominent style of the Maruyama School in 19th century Japan.

Born in Kyoto, Kunni Ōyō studied painting from his father Kunii Ōbun (應文, 1833-1887), and then became the sixth-generation head of the Maruyama School of Japanese painting. Ōyō was also a respected connoisseur, and his authenticating inscriptions were highly regarded by scholars and collectors alike.

While functional in form, this charka is a fine work of art. With Fabergé, such useful objects regularly became decorative objects of luxury, and often served as gifts, as is the case with this example, which retains its original fitted wood case. The charka, of mottled green jasper and mounted in gold decorated in white enamel, is documented in the surviving archives of the Imperial court as having been acquired by the Dowager Empress Maria Feodorovna, born Princess Dagmar of Denmark, widow of Tsar Alexander III, in 1906. It later passed through the collections of Queen Olga of Greece, then Prince Christopher of Greece, before being auctioned in 1952 and acquired by Georges Lurcy, uncle of the present donor.

Antoine-Louis Barye’s bronze sculptures showcase his knowledge of both the anatomy and motion of wild animals, knowledge widely admired in his time.
His unconventional approach to the subject of animals made him the most notorious, and perhaps the most influential, of the 19th-century animaliers—a group of artists specializing in sculptures of animals. His repeated challenges to artistic convention brought legitimacy to animals as subject, revived the small-scale bronze, and revolutionized the field of sculpture.

The Turkish Horse is one of Barye’s most successful and enduringly popular depictions of a single horse. Bursting with nervous energy, this powerful Turkish horse reacts to an unseen stimulus. Barye masterfully captures the qualities admired in Near Eastern horses—their beauty, elegance of proportion, and independent spirit. It is the epitome of Romantic sculpture. In addition to being an iconic subject, the dark green-patinated atelier cast (cast and finished under the supervision of Barye himself) is of outstanding quality and a touchstone for the connoisseurship of Barye bronzes.

John Walker’s North Branch II reflects a love for the Maine coast. During the past decade, he has drawn inspiration from a tidal cove at Seal Point near the Damariscotta River. Often created outdoors, his canvases respond to the landscape and its changing atmosphere by incorporating references to water, clouds, rainbows, trees, and earth. The artist even uses actual mud from the cove, and the rough texture provides a dynamic gestural presence offering a stark contrast to prismatic strokes of bright color that conjure the ethereal nature of light. Through such means, Walker’s paintings balance realistic landscapes with painterly abstraction, attending equally to space and surface.

The “Prince of Wales” Chandayan, named for the Bombay museum where most of its leaves reside, is an illustrated manuscript pivotal to the history of early Indian painting. Produced at one of North India’s Muslim courts in the early- to mid-16th century, its sophisticated paintings demonstrate the interplay between indigenous and Persian-inspired painting styles. The story itself, composed in 1379, is on its surface a tale of elopement and adultery between the hero Lorik and his lover, Chanda, but it is actually a metaphor for a Sufi teaching that likens the quest for oneness with God to the pursuit of one’s beloved. This page, generously given by Mrs. Cynthia Hazen Polsky of New York, depicts an episode near the story’s finale in which Lorik and Chanda—both in disguise—return to their hometown and meet Lorik’s legal spouse, Maina. An outstanding addition to VMFA’s internationally recognized collection of Indian art, the painting joins two other “Prince of Wales” pages in the South Asian collection.

About the Virginia Museum of Fine Arts
With a collection of art that spans the globe and more than 5,000 years, plus a wide array of special exhibitions, the Virginia Museum of Fine Arts (VMFA) is recognized as one of the top comprehensive art museums in the United States. The museum’s permanent collection encompasses more than 23,000 works of art, including the largest public collection of Fabergé outside Russia and one of the nation’s finest collections of American Art, Art Nouveau and Art Deco. VMFA is home to acclaimed collections of English Silver and Impressionist, Post-Impressionist, British Sporting and Modern & Contemporary art, as well as renowned South Asian, Himalayan and African art. In May 2010, VMFA opened its doors to the public after a transformative expansion, the largest in its 75-year history. Programs include educational activities and studio classes for all ages, plus fun after-hours events. VMFA’s Statewide Partnership program includes traveling exhibitions, artist and teacher workshops, and lectures across the Commonwealth. VMFA is open 365 days a year and general admission is always free. For additional information, telephone 804-340-1400 or visit www.vmfa.museum.