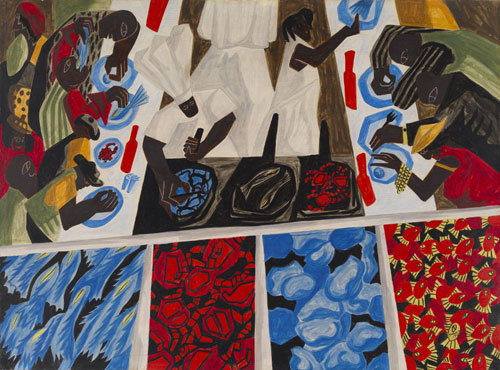 Jacob Lawrence, Catfish Row
Jacob Lawrence’s Catfish Row depicts the shared preparation and consumption of food in black communities, which offered some respite from the hardships of racial discrimination in the post-World War II years. The 1947 painting derives from a Fortune magazine commission, one of 10 temperas by Lawrence  depicting African American life in the so-called Black Belt, a broad agricultural region of the Deep South.

This acquisition, in its original pin-oak frame, resonates across VMFA’s diverse African, American, and European collections, while deepening our overall holdings of leading African American artists. Catfish Row joins three other examples of Lawrence’s graphic work in the museum’s permanent collection—the 1943 Subway gouache; 1974 The 1920s…The Migrants Arrive and Cast their Ballot single screen print; and 1977 The Legend of John Brown multiple screen prints. As a tempera on board, it provides VMFA with an important example of Lawrence’s acclaimed art that can be on view indefinitely, unlike the more light-sensitive works on paper that require regular rotation.

Dale Chihuly, Red Reeds
Composed of more than 100 10-feet red glass reeds, this work was produced for the 2012 exhibition, Chihuly at the Virginia Museum of Fine Arts. The reeds were blown at the Nuutäjarvi Glass Factory in Nuutäjarvi, Finland, home to the largest annealing ovens in the world. The red glass in Finland has a particularly brilliant quality, due to the ruby red pigment and the added chemical element neodymium. Chihuly’s work is frequently informed by nature and, appropriately, Red Reeds is displayed among water lilies, lotus, and grasses in VMFA’s reflecting pool of its Robins Sculpture Garden. It represents the first site-specific outdoor work by Chihuly to be acquired by an art museum. Dale Chihuly’s Red Reeds is now a permanent fixture in the E. Claiborne and Lora Robins Sculpture Garden.

Hank Willis Thomas, Zero Hour
An acclaimed young artist, Hank Willis Thomas often appropriates mass media images and texts, which he manipulates to explore tacit assumptions and attitudes about black identity. Zero Hour presents fellow artist Sanford Biggers dressed in the guise of a 19th-century minstrel, whose image Thomas found in Emory University’s photographic holdings documenting African American life. Six individually framed images—displayed side by side and measuring fifteen feet overall—feature Biggers dressed in a tuxedo, complete with tails, gloves, and a top hat. The right side of his face and body are white, while his left side is black, creating a striking representation  of racial hybridity. A film of Lumisty applied to the glazing causes the images to go in and out of focus as the viewer changes their  position—another visual analogy for the increasingly blurry lines of race itself. This is the first work by Thomas to enter VMFA’s permanent collection. It will be featured in the museum’s spring 2014 collections-based exhibition Identity Shifts, held in tandem with the traveling  exhibition Posing Beauty in African-American Culture.

Six Native American artworks
Six important Native American artworks come from the Robert and Nancy Nooter collection, acquisitions that significantly enhance VMFA’s permanent holdings of indigenous American art. Two artworks were donated to the museum: an 18th-19th-century dagger from the Pacific Northwest Coast, and a 19th-century mask in the form of an eagle from the Bella Bella of Canada. In addition to these gifts, VMFA also purchased four artworks from the Nooters: a 19th-century dream-dance mask from the Yu’pik of Alaska, carved in wood and accentuated with feathers and paint; an 1865-70 child’s serape from the Navajo of the Four Corners region of North America; a late-19th-century Cheyenne girl’s three-hide dress made of deerskin hide with seed and brass beads; and a late-19th-century Cree pipe accentuated with dyed porcupine quills.

About VMFA acquisitions
These works of art were approved by the VMFA Board of Trustees in December 2013. VMFA is a state agency and a public/private partnership. All art is purchased with private funds from dedicated endowments. After VMFA’s board approves proposed acquisitions on a quarterly basis, the art becomes the property of the Commonwealth of Virginia to protect, preserve, and interpret.