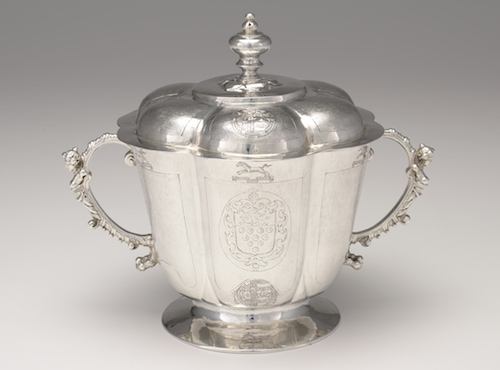 The Jewels of Jean Schlumberger

Fifty dazzling works of art in English silver have been given to the Virginia Museum of Fine Arts by collector Rita R. Gans of New York, significantly elevating the stature of VMFA’s collection.

VMFA Director Alex Nyerges calls it “the most important and fabulous gift of English silver in memory in many years to any museum in the world.”

“This additional gift, when united with the 102 works of art already in the Virginia Museum of Fine Arts’ Jerome and Rita Gans Collection of English Silver, means the collection is arguably the best of its kind in America. When the new gift is installed, the gallery will be the most important of its kind on view in the U.S.,” Nyerges says.

The silver in the latest Gans gift ranges in date from 1440 to 1845. The largest portion is from the Georgian period, when London’s silversmiths led Europe in skill and innovation.

Mrs. Gans’ earlier gifts – in 1997, 2001 and 2006 – established VMFA as a prime destination for serious scholars of British silver in America.

After the death in 1996 of her husband, Mrs. Gans announced that she would not continue to collect, but she quickly relented. Her gift this year of an outstanding group of objects, purchased by Mrs. Gans between 1997 and 2009, brings a new depth to the collection, Nyerges says.

“When the Ganses first began to collect in the 1970s, they were drawn to very bold, sculptural silver,” says Ellenor Alcorn, VMFA’s consulting curator for the Gans collection.

“They bought dynamic works that were a departure from the more staid tastes of traditional American collectors. More recently, Rita became interested in silver with a very refined, sophisticated sensibility. The objects made for the great collector and impresario William Beckford, for example, have the delicate features of jewels. They are historically important but also very intimate, personal objects that reflect Rita’s passion for collecting.”

The most recent gift superbly complements previous Gans donations, according to Dr. Mitchell Merling, VMFA’s Paul Mellon Curator and Head of the Department of European Art. “It is a collection full of fascinating stories,” he says.

VMFA will open a new gallery devoted to the Gans collection in September.

Merling says Mrs. Gans has also supported scholarship and public programming at VMFA. “With her support, we have been able to invite leading scholars to lecture here. Now, with this most recent gift, the collection will attract not only specialists and scholars, but the broader VMFA audience. Rita really wants our public to enjoy and share in this gift.”

Programs in Richmond include educational activities for all ages and entertaining after-hours events. Statewide outreach programs through partner organizations across Virginia include traveling exhibitions, artist and teacher workshops, media resources, and lectures. For additional information, telephone 804-340-1400 or visit the museum online at www.vmfa.museum.

This silver cup and cover were made in London in about 1650 by Richard Blackwell II (active London, born circa 1624). It is among works given this year to VMFA by collector Rita R. Gans of New York. (Photo by Katherine Wetzel, © 2010 Virginia Museum of Fine Arts)

This silver gilt cup and cover were made in about 1740-41 by Frederick Kandler. It is among works given this year to VMFA by collector Rita R. Gans of New York. (Photo by Katherine Wetzel, © 2010 Virginia Museum of Fine Arts)

This rock crystal standing cup with silver gilt mounts and turquoise was made in 1827-28 by John Bridge (British, 1755-1849). It is among works given this year to VMFA by collector Rita R. Gans of New York. (Photo by Katherine Wetzel, © 2010 Virginia Museum of Fine Arts)