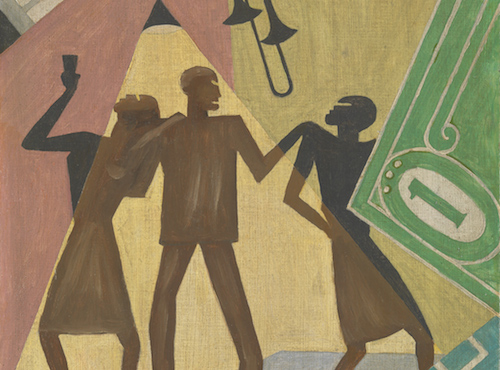 A version of one of VMFA’s recent American acquisitions is among 12 featured on a new Forever stamp in the Postal Service’sModern Masters series, which will be released in March.

The Prodigal Son (ca. 1927) by Aaron Douglas was among the group of 12th to 20th-century objects by African and African American artists acquired on December 16 by VMFA’s Board of Trustees. The work acquired by VMFA is an oil on canvas; the stamp features the same subject produced in gouache on paper from the collection of the Beinecke Library at Yale University. Aaron Douglas is regarded as the leading visual artist of the Harlem Renaissance as well as the first black artist to create a distinctive modernist style that connected contemporary African Americans with their African heritage. The Prodigal Songouache version was commissioned to accompany James Weldon Johnson’s God’s Trombones: Seven Negro Sermons in Verse, a collection of free-verse poems inspired by folk sermons of southern black preachers. VMFA’s painting directly relates to this award-winning 1927 publication for which Douglas produced related works, including versions of the same subject in different media.

VMFA’s collection features work by all but two of the other artists in the Modern Masters stamp series, issued to mark the centennial of the 1913 Armory Show, a landmark exhibition that introduced modern American and European art to a broad audience. VMFA owns another painting that was exhibited at the Armory Show—Arthur B. Davies’s Line of Mountains (ca. 1913).

VMFA’s Shop will carry the Modern Masters stamp collection once it is released. The Shop also features a variety of African and African American-themed gifts, cards, and books.

Radiance from Ancient Heights: Ethiopia’s Sacred Art in Context, January 24
A vibrant outpouring of art and architecture has supported the continuity of the Ethiopian church, one of world’s earliest churches and the first in sub-Saharan Africa. VMFA African Art Curator Richard Woodward examines the distinctive types and styles of ecclesiastical artworks in VMFA’s new Ethiopian collection, with further illumination provided by a short film by filmmaker Tim Reid. $8 (VMFA members $5)

In Plain Sight, February 15
Examine the world of Virginia’s enslaved peoples through a range of visual and verbal documents in this collaborative program with the Virginia Historical Society. The database, Unknown No Longer, compiled by the society, will be featured along with objects in VMFA’s American Art collection. This program is free.

About VMFA’s African and African Art Collections
Regarded as one of the finest in the United States, VMFA’s African Art collection is on permanent view in the museum’s Dominion Resources Gallery. Approximately 400 works span 2,000 years of history and represent the artistic heritage of more than 100 cultures from the African continent. VMFA’s major holdings in African and African American art have been enriched by newly acquired objects from Ethiopia as wells as works by leading artists Elizabeth Catlett, Beauford Delaney, Aaron Douglas, and Gordon Parks.

About the Virginia Museum of Fine Arts
VMFA’s permanent collection encompasses more than 33,000 works of art spanning 5,000 years of world history. Its collections of Art Nouveau and Art Deco, English silver, Fabergé, and the art of South Asia are among the finest in the nation. With acclaimed holdings in American, British Sporting, Impressionist and Post-Impressionist, and Modern and Contemporary art – and additional strengths in African, Ancient, East Asian, and European – VMFA ranks as one of the top comprehensive art museums in the United States. Programs include educational activities and studio classes for all ages, plus fun after-hours events. VMFA’s Statewide Partnership program includes traveling exhibitions, artist and teacher workshops, and lectures across the Commonwealth. VMFA is open 365 days a year and general admission is always free. For additional information, telephone 804-340-1400 or visit www.vmfa.museum.