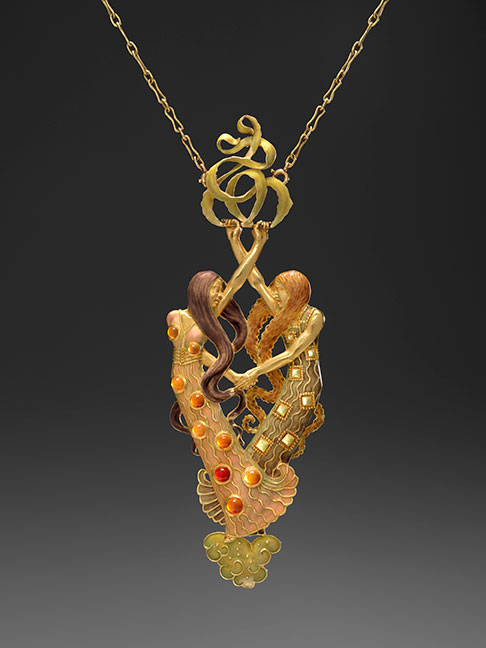 A necklace by a pioneer in Art Nouveau Design, a rare wooden gong from the Gabon’s Tsogo culture, an 17th century Ethiopian icon and a selection of photographs including a work by Richmond-based Cynthia Henebry, are among the works acquired by VMFA in October.

An important artist and teacher, Eugène Grasset is considered by scholars to be a pioneer in Art Nouveau design. He was active as a designer of decorative arts, such as stained glass, furniture, jewelry, textiles, and ceramics. Today Grasset is especially known for his theatrical and advertising posters, magazine covers, and book illustrations. He provided many illustrations for books produced by the printer Charles Gillot. Through his close relationship with this successful printer, Grasset met the highly talented jeweler Henri Vever, who later commissioned designs by him for 20 pieces of jewelry for the international exhibition in Paris in 1900. This necklace, displayed by Maison Vever at the 1900 exhibition, was acquired in June 1900 by Gillot for his wife Marie. The Vever firm was awarded the prestigious Grand Prize for their display, a rich testimony to Art Nouveau “artistic” jewelry.

VMFA has purchased a rare wooden gong from Gabon’s Tsogo culture.  The gong is unusually complex in conception, with both the front and back showing a figure inside diamond-shaped fields. The gong was acquired from Robert and Nancy Nooter, longtime benefactors of the museum’s African art collection.  It will be a pivotal work in the in the Central African section of the collection, where other masks, figures, and architectural panels deal with the cycle of life, the ancestors, and divination. White coloring refers to the spirit realm, and its use on the face at the top of the gong echoes the chalking of young initiates during initiation to Bwiti, a system of spiritual practices prevalent in Gabon. Diamond-shaped markings incised on the side edges of the gong indicate the passage of life through its different stages. Chanting and the music of harps, drums, and gongs deepen the initiation experience. The gong has a soft, resonant timbre when struck by a wooden tapper.

Robert and Nancy Nooter of Washington, D.C., have donated an important Ethiopian icon to the museum’s African collection. The central panel of this triptych painting shows the Mary with Jesus in her lap.  The child gazes up at Mary, raising his right hand in blessing and holding the scriptures in his left. John the Baptist stands beside Mary, and Archangels flank the scene in the upper quarters. Painted on right panel of the folding icon is the Crucifixion, while the left panel shows the Anastasis, a particular convention of Ethiopian theology and iconography in which the    Resurrection of Christ includes the raising of Adam and Eve to demonstrate the forgiveness of sins. Disciples and saints, including St. George, patron saint of Ethiopia, slaying the dragon, fill out the panels. Ethiopian religious works were continually used and handled and therefore bear evidence of wear that testifies to the daily role these artworks played in the lives of the faithful.

Working with a large format camera and film, Cynthia Henebry explores the intersection between childhood and the adult world, with a specific focus on what she describes as the “fundamental disconnect” between adult perceptions of childhood and children’s own experience of themselves and their world. Henebry values her subjects’ ability to communicate for themselves and has developed an increasingly collaborative style while working with the children she photographs. Mavis emerges as one of the most distinctive models across Henebry’s recent series, The Marriage Oaks. In Mavis in the Backseat, the cavernous space of the station wagon emphasizes her diminutive presence, yet the intensity of her gaze suggests outsized thoughts and emotions contained within her small body.

A Richmond based artist, Cynthia Henebry recently received her MFA in Photography from Virginia Commonwealth University. VMFA also acquired two recent Lumen prints by Virginian photographer Willie Anne Wright and a photograph by LeRoy Henderson, who grew up in Richmond and now lives and works in Brooklyn.

About VMFA acquisitions
These works of art were approved by the VMFA Board of Trustees in October 2014. VMFA is a state agency and a public/private partnership. All art is purchased with private funds from dedicated endowments. After VMFA’s board approves proposed acquisitions the art becomes the property of the Commonwealth of Virginia to protect, preserve, and interpret.