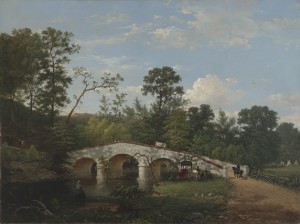 One-hundred fifty years ago today, 160 miles north of Richmond, a horrific battle near Sharpsburg, Maryland, and Antietam Creek marked the turning point in the Civil War. It was the first major confrontation in the conflict to take place on Union soil and remains the single deadliest day in American history with over 23,000 casualties on both sides (comparable to 230,000 in contemporary numbers). While not a decisive victory for either North or South, it gave President Lincoln the political incentive to issue just five days later the preliminary Emancipation Proclamation—freeing enslaved people in the rebellious states. Visitors can mark this anniversary in VMFA’s American Art galleries, where William MacLeod’s 1864 painting, Antietam Bridge, hangs next to an actual document of the consequential event—Alexander Gardner’s famous photograph of Lincoln and George McClellan taken two weeks after the battle and one month before the president relieved the general of his command as head of the Army of the Potomac.

At first glance MacLeod’s picturesque scene of the strategic stone bridge seems more than just two years away from that dreadful day, when the creek was said to run red with blood. A closer look, however, reveals the artist’s attempts to memorialize the event. In addition to civilians conversing at ease, MacLeod depicts a Union Zouave on horseback, while an ambulance is positioned at the infamous bridge’s center as if a reminder of the past carnage. The nearby military encampment confirms that the war is not yet won. This reflective scene is just one such Civil War work in VMFA’s galleries that encourages visitors to understand the national conflict in a different way, by illuminating not only the historical facts but issues of loss and memory that still resonate today.