Connect » Antietam and the Civil War – another artist’s perspective

Yesterday’s post on Antietam has relevance today with the PBS airing of “Death and the Civil War” tonight at 8 pm EST. According to the WCVE Community Idea Stations: “The shattering Civil War death toll transformed hundreds of thousands of individual lives and the life of the nation as well, from its understanding of the rights and responsibilities of citizenship to the profound struggle of a deeply religious culture to reconcile these events with a belief in a benevolent God.” 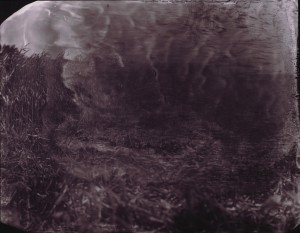 This image belongs to Virginia photographer Sally Mann’s Last Measure series, titled after a line in Lincoln’s Gettysburg Address and based on her visits to Civil War battlefields. Untitled #9 shows a cornfield beside “Bloody Lane,” the sunken road where thousands of men lost their lives on this most deadly day in American history. Although clear at the left edge, the field dissolves across the surface into an abstract cloud of photographic emulsion that conveys something of the strife and anguish described in eyewitness accounts. Mann’s bold experiments with the nineteenth-century collodian wet-plate process—in which she pours photosensitive emulsion onto a glass plate shortly before exposure—help her transcend photography’s realist conventions to achieve a heightened level of expression.