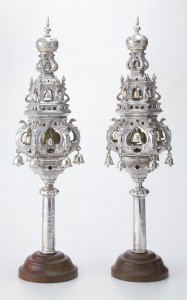 Thanks to the generosity of The Jewish Museum in New York, VMFA is able to present a pair of Dutch 17th-century silver Torah Finials in the European Galleries as a long-term loan.

These artifacts are the first examples of Judaica ever to be displayed in the permanent galleries of VMFA. Made at a time – the 17th Century – when Jews were officially tolerated in the Dutch republic (think of Rembrandt’s house in the Jewish quarter) these Torah finials (made to decorate a Bible scroll) also exemplify the Baroque style with their stepped back curves. Each finial is fitted with over a dozen tiny bells which would have made a joyous sound as the scroll of the bible was carried in procession around the synagogue. Though they are silent in their case we can imagine the beautiful noise they must have made – and they delight our eyes as well.

Not only do they remind us of a faith heretofore not represented in the museum, they remind me also of the diversity and majesty of the many faiths we celebrate in this great, newly reopened museum.