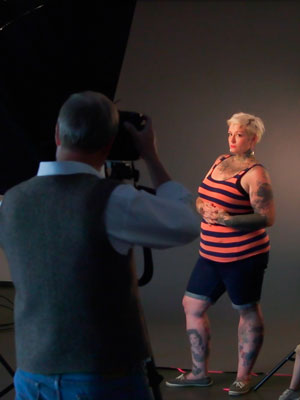 A heavily inked and pierced mom arrived early, before anyone else, and waited patiently with her young son while the photographer set up his camera and lights. Getting her first tattoo at 18, the woman had built up quite a collection of body art since then, her favorite being the intricate roses and spider webs on her neck and upper chest. The young woman was thrilled about the opening of Japanese Tattoo: Perseverance, Art, and Tradition at VMFA: “It’s [tattoo art] a great art form and something that should be represented in fine art.”

Once in front of the camera, the woman was eager to show off her tattoos. Removing jewelry and glasses, adjusting her hair and clothing, and turning this way and that, she worked with the photographer to help him capture the art so painstakingly rendered on her skin. In one shot, the photographer even had her reach out her fisted hands toward the camera to get a close-up of her tattooed fingers.

Since VMFA’s latest special exhibition explores the history and artistry of Japanese tattoo, it seemed only fitting that the museum also explore tattoo art right in our own backyard. After all, Richmond is the third most tattooed city in the country, with many stunning works of art walking down our streets every day.

With this exploration in mind, VMFA issued a call to Richmond’s inked community to stop by the museum last Friday and have their art photographed by Glen McClure, a Tidewater photo-artist known for his striking portraits of everyday people—from nuns to shipyard workers. For this project, McClure’s mission was to capture not only the diversity of tattoos in the city but also the distinct personalities behind these pieces of art.

By the time the young woman’s session was over, a line of eager subjects had formed. And they were a diverse bunch—from a clean-cut, young engineer and his wife who happened to work at VMFA to a long-haired, well-spoken pastry chef to a biker with shaved head and leather bracelets. While a few of the tattoos were subtle, most were a distinctive part of their owner’s persona, like the young woman who wore all black to allow her vividly colored sleeves of peonies and coy fish to stand out in sharp contrast. (As it turns out, the woman didn’t only have tattoo sleeves; her whole body was tattooed.)

The pictures that McClure shot were indeed worth a thousand words, but the back stories of these tattoos were just as intriguing. After the photo sessions, many of the parade of eager photo subjects also willingly submitted to an interview on video, revealing the pain, the cost, the artists who inked their work, and why they got their tattoos in the first place, among other information.

Explained the young engineer, whose calf bears a stunning Japanese-style tattoo of a mountain he summited, “It not only represents what I accomplished but what I aspire to accomplish.”

Every slot was filled during the two-hour shoot on Friday. The evocative work that came out of this initiative is now on VMFA’s website. Click here.