Connect » Ladies and Gentlemen… The Avant-Garde 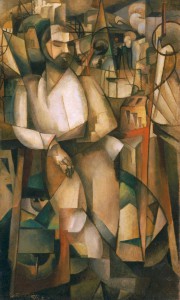 In winter, 1913, The International Exhibition of Modern Art, better known as The Armory Show, opened in New York City.  It was fully loaded with over 1300 modern artworks by more than 300 artists from Europe and America.  Mere style and technique would challenge the sensibilities of the norm and spur a sea change in U.S. art and culture.

On Friday, April 11, at 6:30 pm, VMFA and the James River Film Festival will present the Virginia Premiere of the documentary The Great Confusion: The 1913 Armory Show (2013; 84 min.).  Connecticut-based filmmaker Michael Maglaras will introduce and discuss afterwards. The film is complete with back story, the principal organizers and their efforts, high definition images of 60 works, and is as close to attending the exhibition as one can get.
Marcel Duchamp’s incendiary Nude Descending a Staircase, No. 2 surprised the unwary.  Even the relatively unassuming, placid canvasses of Henri Matisse put critics in a swivet. The more chatter the show got the more attendees piled in to be delighted or to mock.
VMFA owns two paintings from the show that are on view in the American Galleries: The Peony Garden by Daniel Putnam Brinley and Line of Mountains by Arthur B. Davies.  Visit them and imagine it is 1913.
As a companion piece, on Saturday morning, April 12, VMFA and JRFF will screen William Eggleston in the Real World (2005; 87 min) with Hollywood director Michael Almereyda in person.  He will intro and discuss his feature-length filmed portrait of Southerner William Eggleston whose photo works legitimatized color photography as modern art in the 1970s at New York’s Museum of Modern Art.
One ticket covers both events. $5 VMFA and JRFF members.  $8 general public.
—Hobart Cornell, Critic-at-large