As Valentine’s Day creeps up, as it always does this time of year, we see love stories everywhere. It gets to be really hard to change the channel when A Charlie Brown Valentine is on tv. Outside of fiction, maybe you’re one half of a great love story yourself.  But how do we immortalize love? Many artists over a span of centuries found the answer: art.

Artists have always painted scenes from love stories, but there are some you may not realize are actually tales of love. This humorous painting 19th century in particular, Courtship in New Amsterdam, doesn’t look anything remotely love related. However, Edmonds’ depicts a young man attempting to woo a woman dutifully knitting. The entwined vine between them is a symbol which prefigures the couple’s budding love. 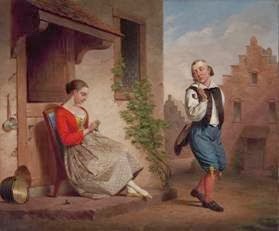 In older centuries, love wasn’t ever on open display. The Double Statue of Man and Woman from Egypt shows a different side of those times. The couple depicted are far from entering into a marriage only “until death do us part”  because they will spend eternity together. This type of statue was placed in non-royal tombs in the Old Kingdom.

The legend of Tristan and Isolde has been put down in poetry, sung as an opera, and made into a movie. It is a gripping tale of two young lovers whose forbidden love crosses the boundaries of rival kingdoms and marital commitment. Their romance is one of the most influential from the medieval period. It is depicted with this buckle made from nickel silver, enamel, and opals. 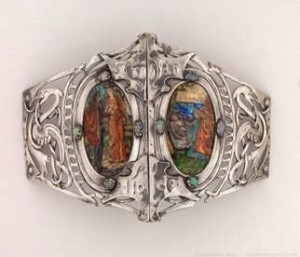 Women are often depicted as symbols of love. In African sculpture, women are often portrayed as a container or as the essential being to carry life forward. The concept for this work derives from that notion as well as Erzulie, the Haitian goddess of love, protection, and motherhood.

A wedding day is a special occasion as two loves are combined into one and the day is filled with memorable moments. This page illustrates three moments in the narrative of a newlywed couple, depicted by Krishna and Radha, a standard practice in Rajasthani paintings.  With their strong color and symbolic images, paintings from Mewar embody the very essence of Rajasthani art. 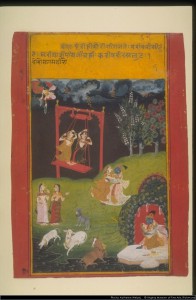 Some love can be fleeting. Stop and appreciate the stories that happened long ago but will live on forever. Happy Valentine’s Day to you and yours!