Connect » Painting Conservation Report and Research Project conducted in anticipation of the 2017 exhibition Frédéric Bazille and the Birth of Impressionism at the National Gallery of Art, Washington DC Unlike Nicolas Poussin’s Achilles among the Daughters of Lycomedes, which contains artistic changes, almost all of which are not apparent or visible in the uppermost paint layer, VMFA’s The Artist’s Studio, Rue Visconti, Paris, by Jean-Frédéric Bazille (1867) contains visual evidence in the painting’s surface that Bazille completely reworked the canvas.  Brushstrokes and textured paint in the paint layer that do not correspond to brushstrokes in the final design reveal that there is a different composition below the current painting (an image beneath the uppermost image). Many of the colors corresponding to this underpainting are visible to the naked eye in various areas of the composition. 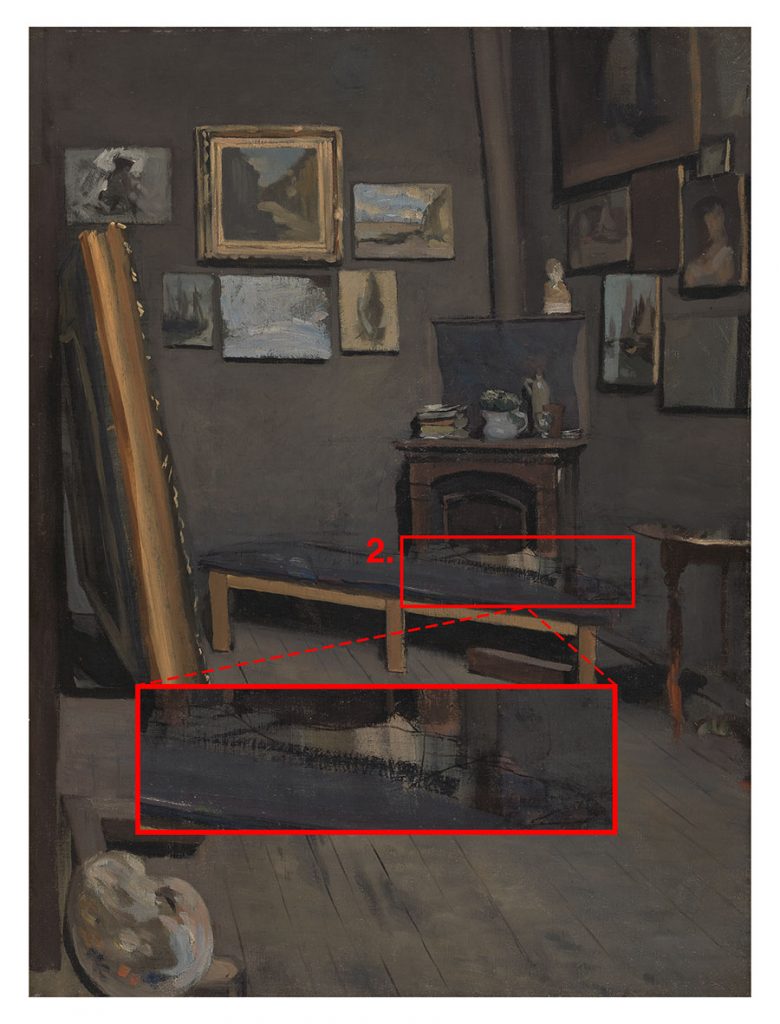 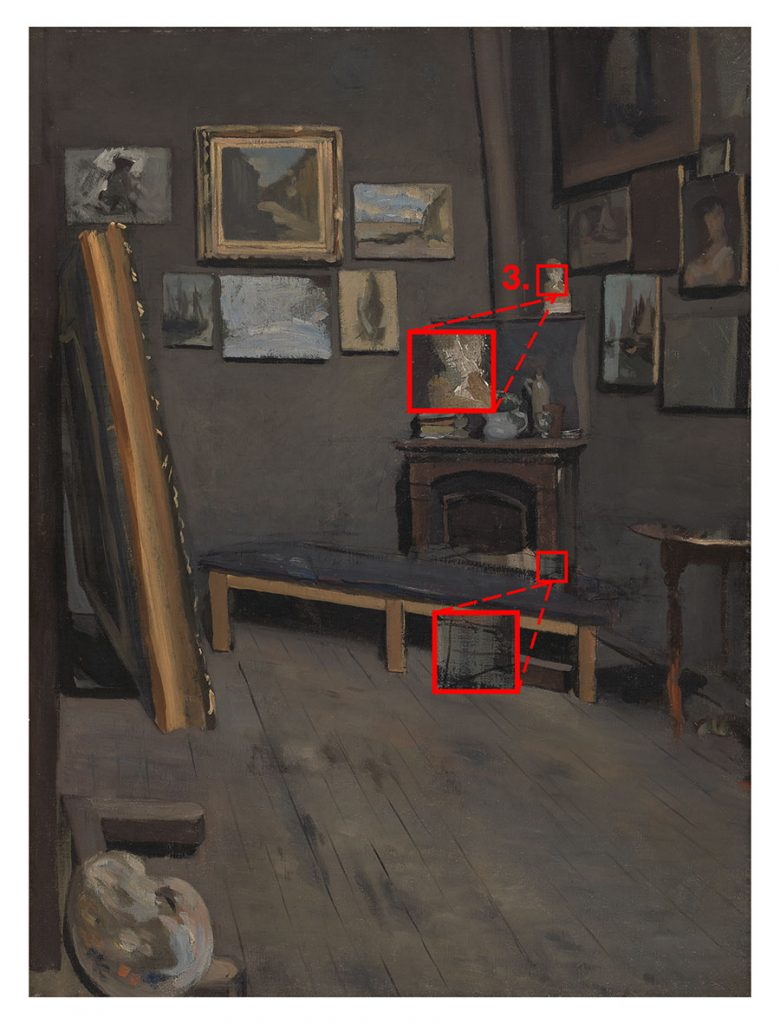 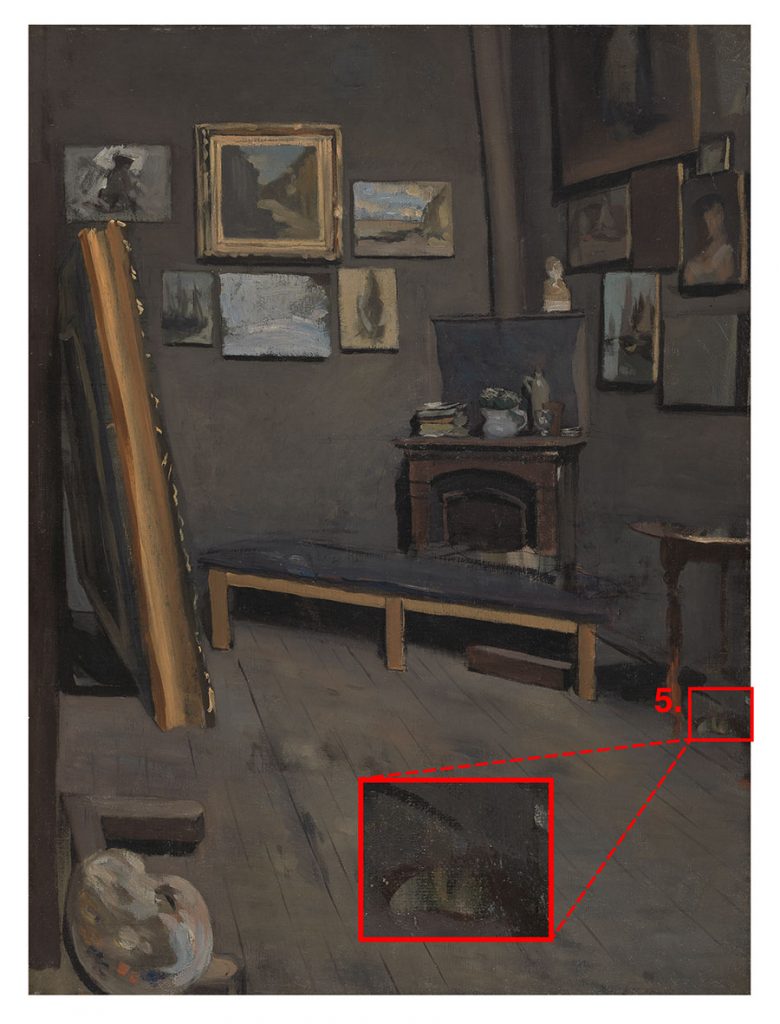 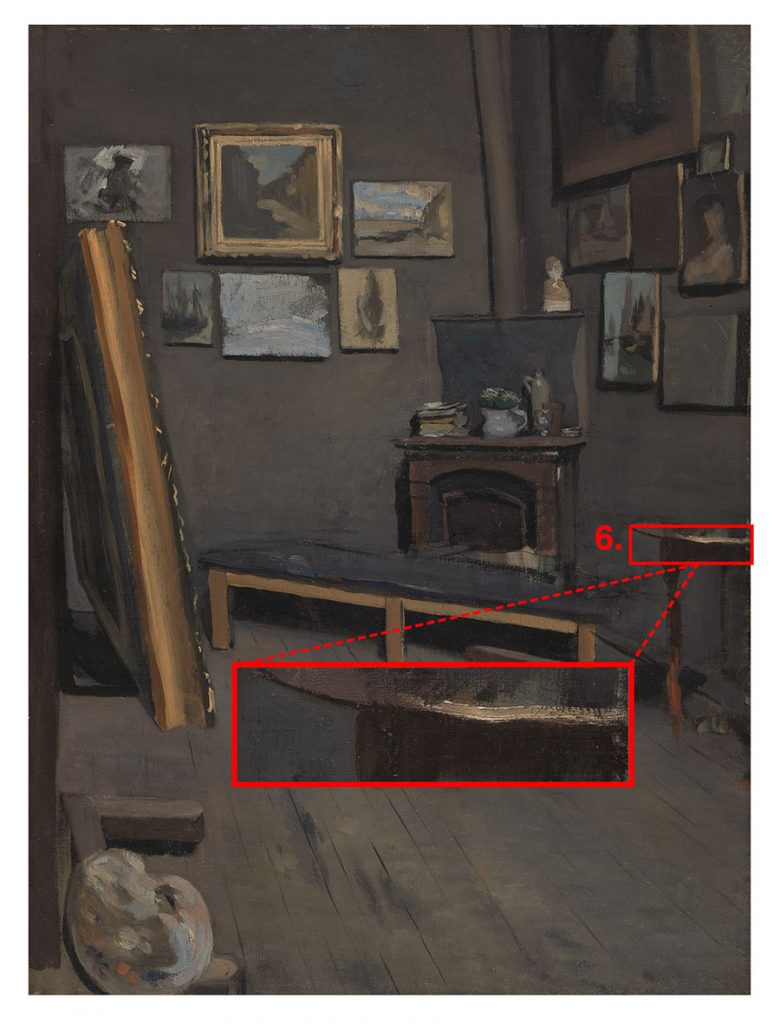 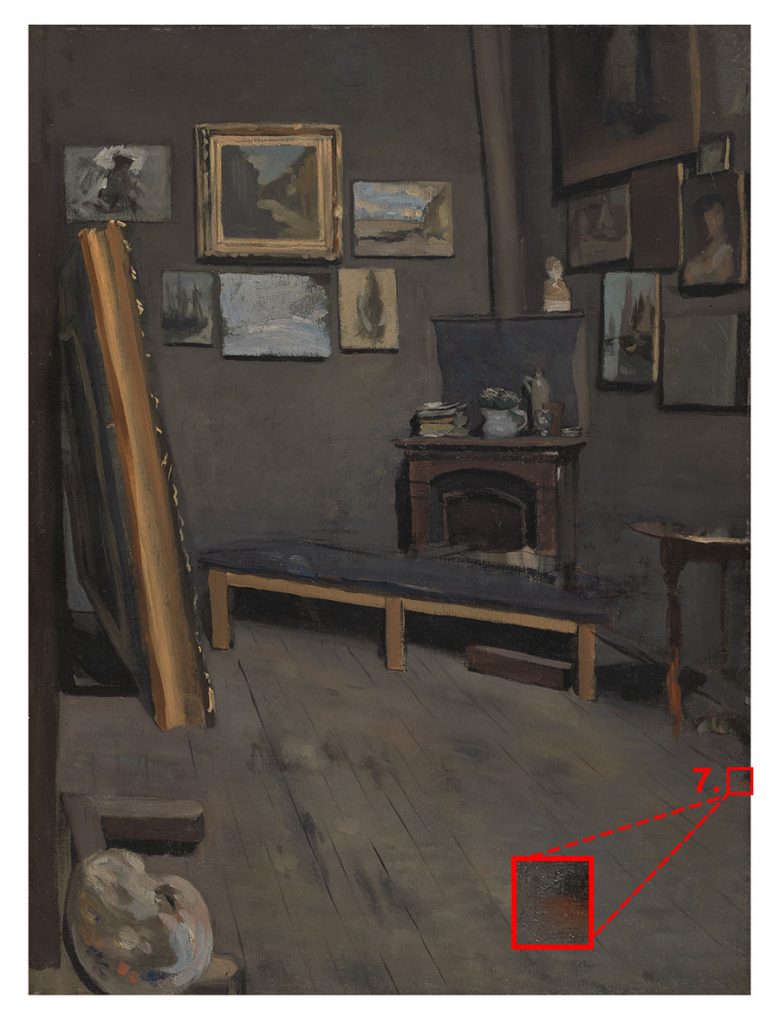 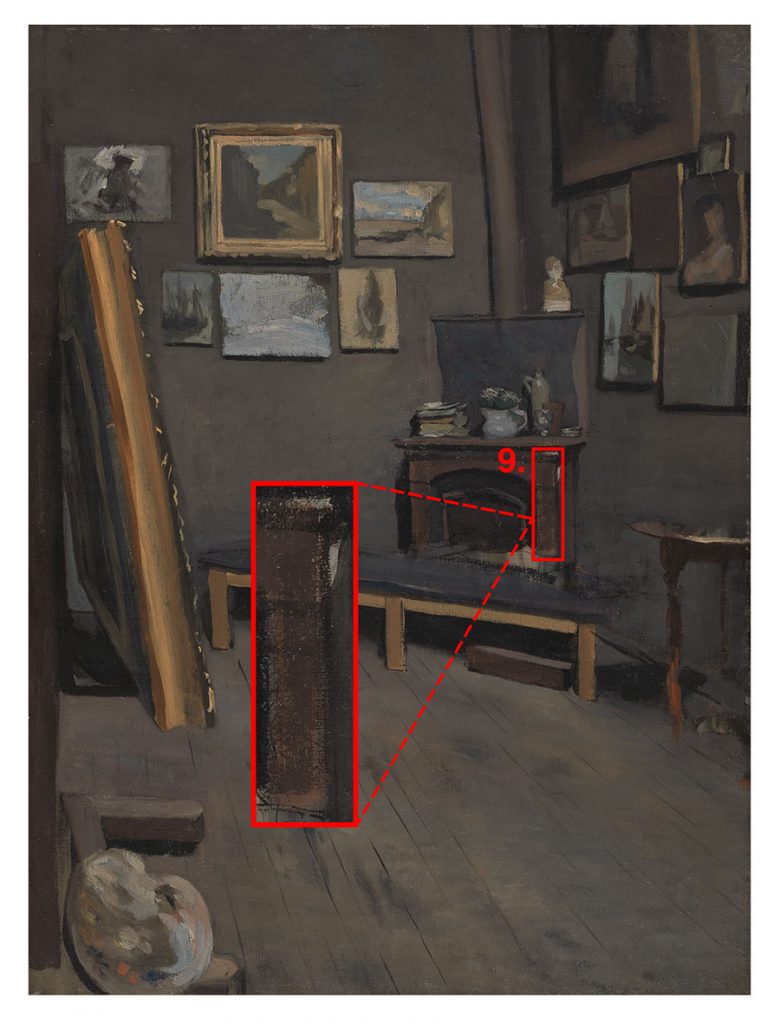 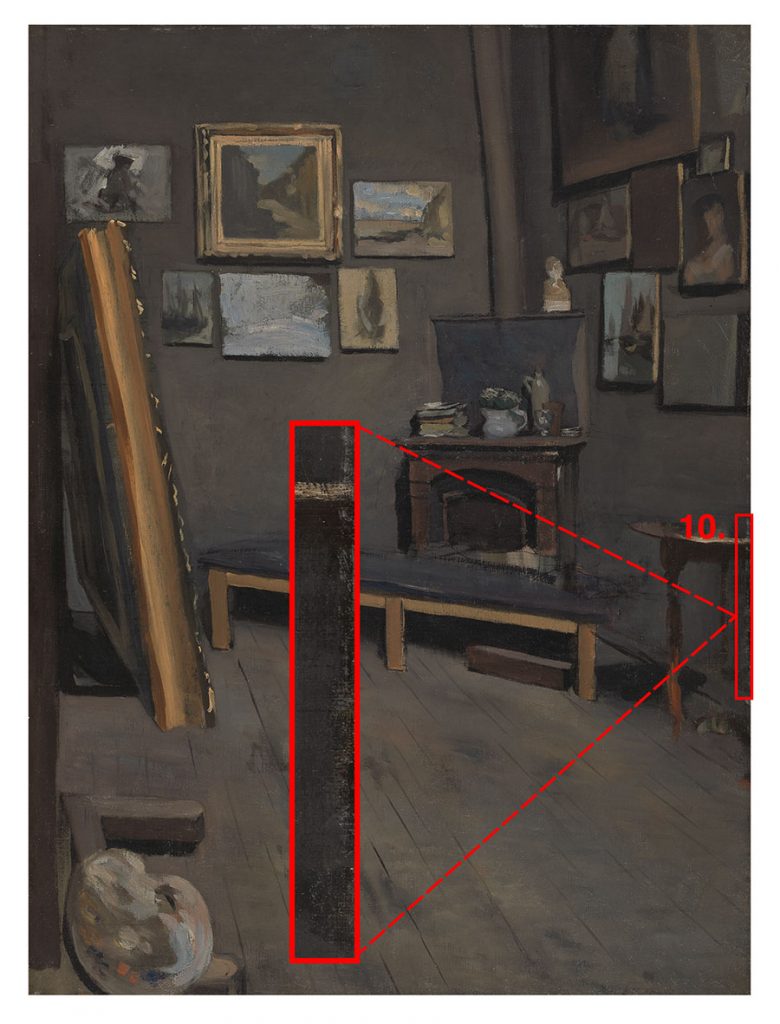 The painting contains dark very fine fluid lines, that appear to be underdrawing drawn over the earlier composition. 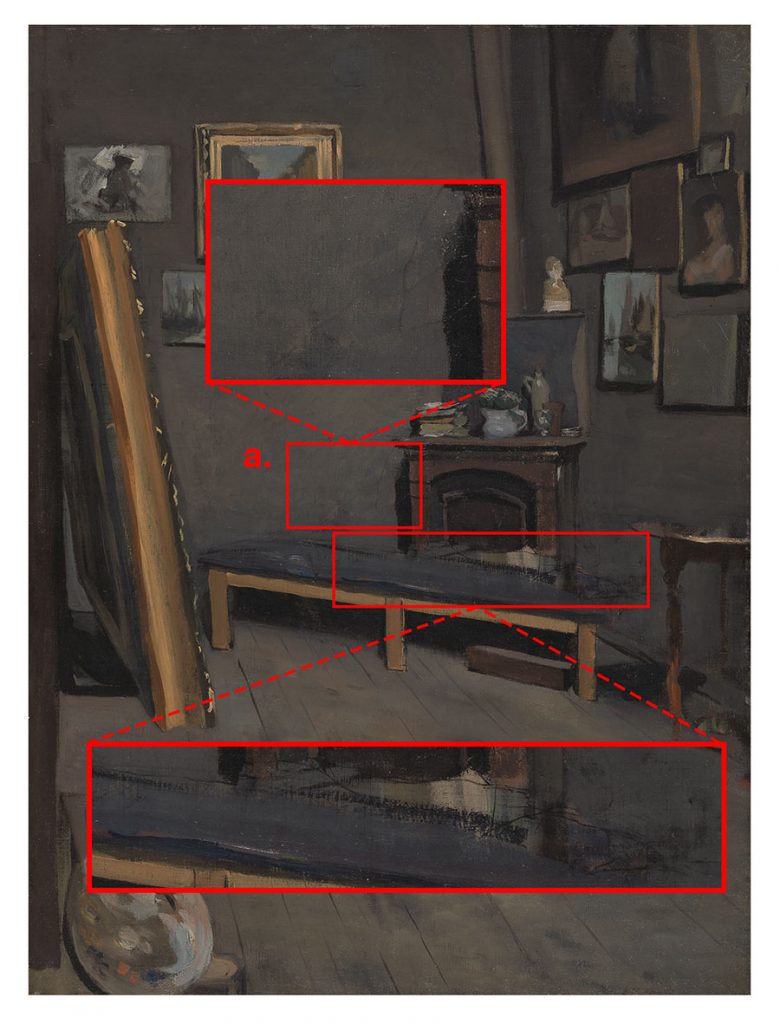 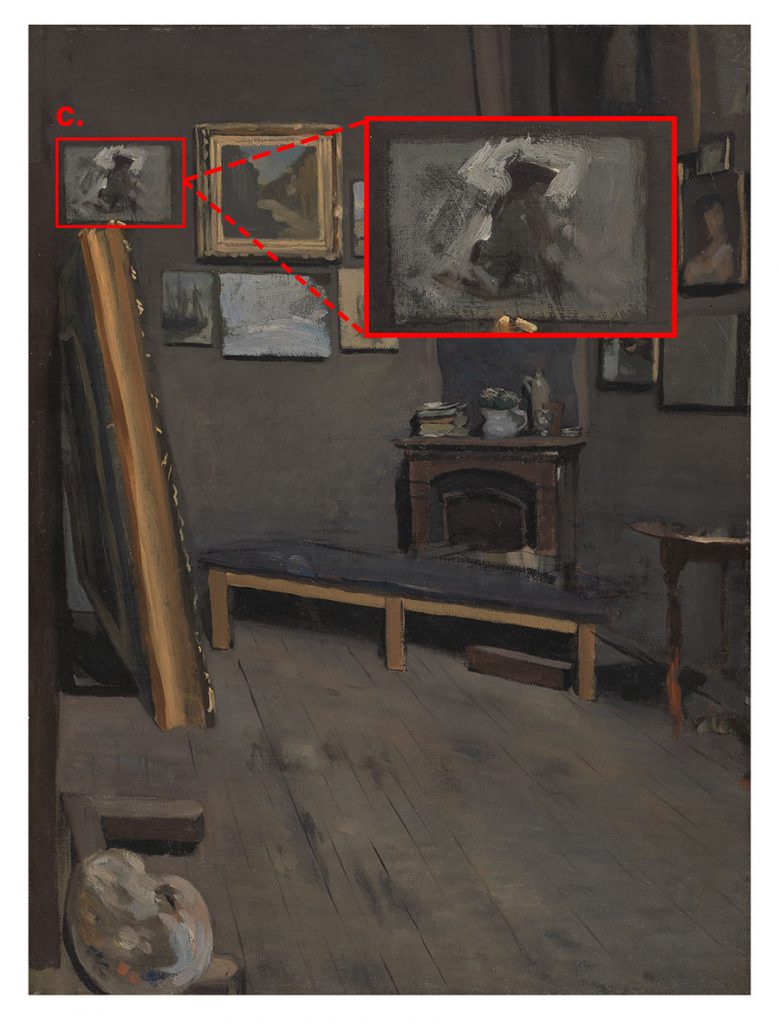 A thick dark charcoal grey vertical brushstroke, on the right edge of the square grey canvas on the right wall (#11), relates to the underpainting yet forms part of the final design as well.  The underdrawing and bright colors corresponding to the earlier composition, that are readily visible in the lower section of the fireplace, the top of the bench, the table top and floor below, and the right wall make these areas appear unfinished.  In contrast, the rest of the composition is more carefully and deliberately defined.

The painting was x-radiographed to better understand the underlying paint layers.  The radiograph reveals the presence of an earlier composition executed in the same orientation. The head of a figure, that appears as a straight–on portrait, is clearly visible in the upper right quadrant, right of center.  Radio-opaque brushwork related to the underlying painting in The Artist’s Studio is present in much of the foreground; beneath the head in the upper body of the figure; in the wall to the right of the figure; in the fireplace; to the left and right of the

fireplace; in front of the painting on the easel; underneath the table; to the right of the bench; and in the upper right corner. There are two fairly large losses, and other smaller losses that have been filled and retouched. The two large losses are along the top edge right of center and in the lower right quadrant. They appear black, or radio-transparent, in the x-radiograph.

All of the shapes unrelated to the current composition and outlined above are difficult to decipher.   One oblong funnel shape in the center somewhat resembles the paper wrapping in Potted Plants by Bazille (1866, Whitney Collection).  Other shapes, located in what would be the torso, could represent a left hand and forefinger resting on the figure’s chin or a white shirt and collar.  The different opacities in the left side of the torso might represent the right (proper) shoulder and right upper arm of a jacket. The figure also looks as though he or she could be reading a paper.  Without further technical evidence all of these suggestions are purely speculative.

Animated image comparing the painting with the x-radiograph Many x-radiographic images of paintings by Bazille reveal completely different compositions underneath.  Still Life with Fish (1866, Detroit Institute of Arts) contains an earlier painting of a still life with fruit that is rotated 90 degrees. Portrait de Paul Verlaine, (1867, Detroit Institute of Arts Museum) also contains a still life below the portrait.  Woman in a Moorish Costume (1869, Norton Simon Museum) has a reclining female figure rotated 90 degrees and a nude that resembles Renoir’s Diana (1867, National Gallery of Art, Washington) is visible in the radiograph of Studio at rue de Condamine (1870, Musée d’Orsay).  Other radiographic results revealing artistic changes in the final composition include The Pink Dress (1864, Musée d’Orsay). In this case Bazille altered the sky and added trees.

Infrared (IR) photography, IR reflectography, transmitted and raking light illumination, Digitome 3-D analysis, and multispectral imaging did not provide information related to the underpainting that was not already visible to the naked eye and apparent in the radiograph. Although these methods were of little help in better understanding the earlier composition, further research and investigative techniques will be conducted.

A variety of scientific methods are available to help conservators uncover hidden details in an artist’s work. Microscopy, x-radiography, infrared reflectography, cross section analysis, macro x-ray fluorescence spectroscopy mapping, and techniques including digital IR, multispectral and hyperspectral imaging can help unravel complicated paint layering in a painting. The Painting Conservation Department will review, in a future web entry, some of the informational benefits and limitations of these different scientific techniques applied while researching other paintings in the museum’s collection.