The following excerpt is from the introductory essay to the exhibition catalogue Tsherin Sherpa: Spirits, published by the Virginia Museum of Fine Arts. Written by Dr. John Henry Rice, the exhibition’s curator and VMFA’s E. Rhodes and Leona B. Carpenter Curator of South Asian and Islamic Art, the 162-page book explores the trajectory of Sherpa’s career, his artistic practice, and the compelling themes (loss, struggle, victory, wisdom, and empowerment) that structure the exhibition’s narrative presentation of his Spirits corpus. Full-color illustrations include the works of art on view in the exhibition, as well as personal photographs of the Tibetan American artist’s life in Nepal and the United States. Adding to Dr. Rice’s insights are essays by Jeffrey S. Durham, H.G. Masters, and Sophia L. Pandé with the artist himself. Tsherin Sherpa: Spirits is on view at VMFA through October 16, 2022. The exhibition catalogue is available for purchase from the VMFA Shop. 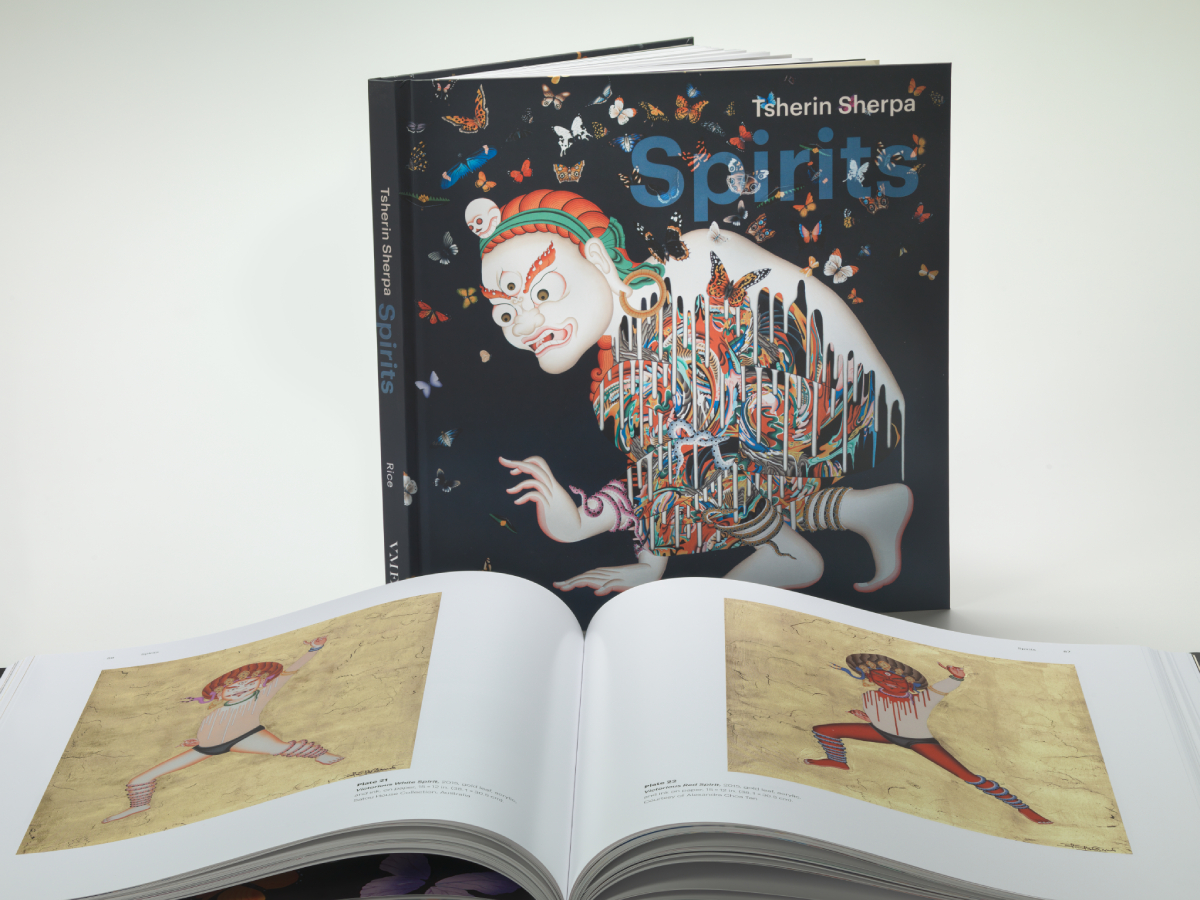 To varying degrees, nearly all of Sherpa’s work involves the transformation of traditional Tibetan imagery for new purposes. These are not, however, merely playful, visually fascinating formal modifications. Transformation itself, arguably, is the defining theme running through his oeuvre, the primary subject of most of his work. His concern with metamorphosis, and the positioning of his work as a site for its exploration, is evident right from the very start, in the butterflies that appear in his first independent foray into contemporary artistic expression. With his art, Sherpa documents and contemplates transformations — of form, of meaning, and of self.

“These Spirits—part Tibetan deities, part contemporary people—give shape to the artist’s experience as a globetrotting, code-switching shape-shifter and, more generally, to the complex negotiations and adaptations of trans-cultural identity that face so many in today’s world.”

Formal metamorphoses obviously lie at the heart of Sherpa’s artistic practice. Integral to exploring creative terrain beyond traditional thangka painting, these transformations challenge the strictures of artistic tradition, radically altering — through distortion, deconstruction, rupture, and rearrangement — the frameworks of his training. Some observers have gone so far as to brand his manipulations sacrilegious or iconoclastic, but Sherpa retains enormous respect for his Buddhist background, and irreverence for its own sake is not a prominent feature of his practice. His approach to the deconstruction and expansion of his tradition’s rigid artistic boundaries, rather, is as an expedient method for revealing new creative possibilities. Instead of iconoclastic, I might propose that the artist’s experiments be called icon-elastic and further suggest that his tactics are, in fact, quite thoroughly Buddhist. Through shedding attachment to the notion that there exists only a single, fixed means for the production of a solitary result the artist opens himself to the prospect of deeper insight.

Similarly Buddhist in its tack is Sherpa’s use of transformational, icon-elastic imagery to signal his insistence that meaning within his work should not, and cannot, be fixed. Like the visual forms themselves, meaning is open, fluid, and evolving. When discussing his work, Sherpa consistently returns to the core Buddhist principle of nonduality, that supposed opposites may not be irreconcilably different and that any apparent object is, in truth, non-different from one’s own mind. In blurring the imagery of sacred and secular, traditional and contemporary, he prompts his audience to reassess such dualities. Most importantly, though, Sherpa wants viewers to recognize the role that they play in bringing meaning to his — and all — art. Asked to explain what his works mean, he contends that their main message is that such meaning depends entirely on the viewer’s approach, what each individual projects onto them. His works’ visual metamorphoses remind us that meaning is not fixed in form but dependent on each viewer’s mind. Sherpa is far more interested in hearing what other’s see in his work than in telling them what they ought to see.

So then to analyze Sherpa’s art, as I will attempt with his Spirits corpus, is largely to impress one’s own ideas upon it. Hopefully, the notion that Sherpa’s own personal and professional development can be traced through the metamorphosing figures of his Spirits will be a compelling one. These Spirits — part Tibetan deities, part contemporary people — give shape to the artist’s experience as a globetrotting, code-switching shape-shifter and, more generally, to the complex negotiations and adaptations of transcultural identity that face so many in today’s world. With their conflation of traditional and modern forms, Sherpa’s Spirits — as do nearly all of his creations — celebrate Tibetan culture while simultaneously challenging its frequently romanticized representations. 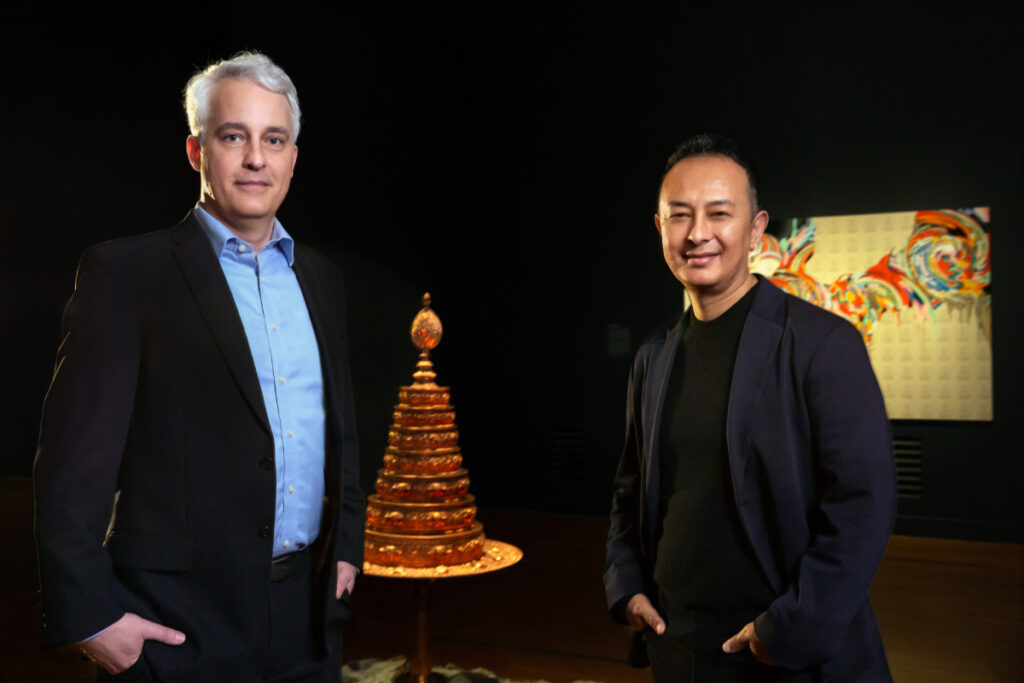