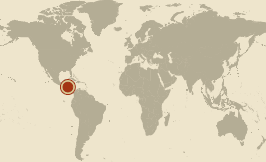 Who? Maya (although hieroglyphs have been found in sites occupied by pre-Mayan cultures such as the Olmec)

Do you see any familiar symbols?

Where? The earliest Maya writing was found in the area now known as southeastern Mexico, Guatemala, Honduras, and Belize.

Why? The Maya people needed a writing system to meet the demands of regional population growth and to record events in the lives of elite, ceremonial functions, and economic transactions.

What? Ancient Maya glyphs are a complex, visually striking writing system with hundreds of unique signs or glyphs in the form of humans, animals, supernaturals, objects, numbers, and abstract designs.

How? Carved in jade, stone, bone, wood, ceramics and shell; written on bark

System? The Maya script is logosyllabic combining about 550 logograms (which represent whole words) and 150 syllabograms (which represent syllables). There were also about one hundred glyphs representing place names and the names of gods. About three hundred glyphs were commonly used. Maya inscriptions were most often written in columns two-gylphs wide, with each column read left to right, top to bottom. The calligraphic styles and pictorial complexity of Maya glyphs are like no other writing system.

Brought to you by the VMFA Art and Education Division
Questions? Please contact Courtney Morano at 804.340.1437 or e-mail courtney.morano@vmfa.museum

Tell us about you!

Would you like to be notified when new resources are available?