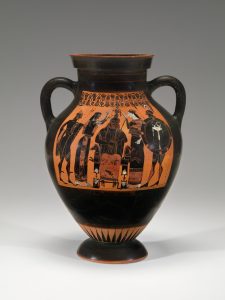 This resource will consist of two different types of looking, thinking and learning activities. These activities call on your observation and thinking skills as you closely examine selected objects from Ancient Greece. The activities will explore the themes of mythology, religion, sport and trade.

Look at This activities provide close-up views with guiding questions and background information. What will you learn about what the ancient Greeks valued?

How do these objects relate to the Greek religion and human need for protection from harm and healing from disease and injury?

WHO WERE THE GREEKS?

Ancient Greece was not a unified country, but a collection of city-states. A city-state was a city and the surrounding towns that all followed the same law. The most famous city-state from Ancient Greece was Athens. Although there were many city-states with different laws, they shared certain cultural aspects that allow us to speak of a Greek Civilization. They had a common language and in general worshipped the same gods and goddesses.

Greeks lived throughout the Mediterranean region and were great sea-farers. By 500 BC they had established approximately 500 settlements in modern-day Greece, the western coast of Turkey, islands of the eastern Mediterranean, south Italy, North Africa and Spain. Goods, people, art, and ideas spread the Greek way of life across many lands.

Language was key – to be Greek meant to speak Greek. The ancient Greeks defined themselves as people who spoke Greek—and were linked by language. In fact, the Greeks considered anyone who did not speak Greek to be a barbarian! 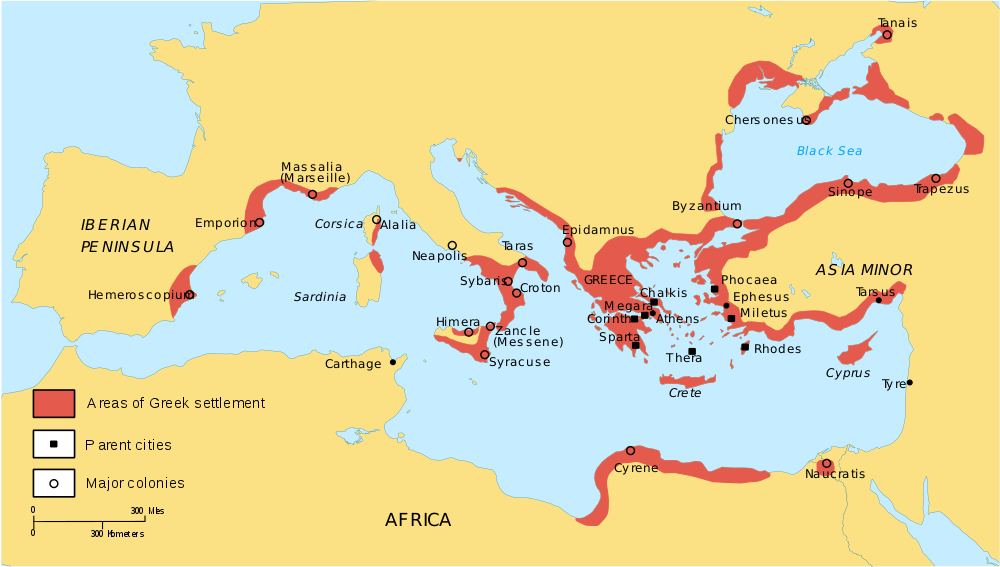 Religion and mythology were very important to the Greeks and they left behind great works of literature that told about their lives, religion and mythology.  The Greeks believed in many gods and goddesses and there were many stories or myths about them. Myths are traditional stories of a supposedly historical event, presenting part of the world view of a people or explaining a practice, belief, or natural phenomenon. Myths involve heroes, gods, goddesses, and even creatures.

In order to maintain balance with the universe, one of the most important aspects of Greeks religion was honoring the gods and goddesses with offerings and even events and festivals.  The main way Greeks would honor the gods and goddesses was to give them something; this was called making an offering. In return for this offering, the god or goddess would hopefully grant a favor.  Offerings could also be made to say thank you for a favor the god or goddess granted an individual.

Click on the pop-up hot spots on the images below of both sides of this vase to learn more about Greek religion and an important god and goddess. Then, think about these questions:

LOOK AT THIS! Explore the Birth of Athena Greek Vase

The Greeks thought that it was just as important to have a healthy body as it was to have a healthy mind.  Sports and athletics were a great way to keep both the mind and body healthy. Gods and goddesses were the greatest examples of mental and physical strength and were honored at festivals such as the Olympics.

The Olympics, which began in 776 BC, were held once every four years in Olympia, Greece. They were held in honor of Zeus, who was the king of the gods and one of the most important gods to the Greeks. Male athletes from every corner of the Greek speaking world came to compete at this festival. They came from as far away as Greek colonies in Spain and Turkey. It was a great honor for your whole citystate to have a first place Olympic athlete, just like it is today. Our Olympics today are modeled on the ancient Greek Olympics.

Of course the great athletes of Ancient Greece did not appear on television, but some of them did become very famous. Athletes were frequently featured in poems, on coins and in sculpture. Greeks also honored athletes by putting their pictures on pottery.

Click on this hotspot exploration to learn more about Greek sport.

The rocky soil and mountainous terrain of mainland Greece made farming difficult, so many Greeks relied on trade and the sea. They made beautiful pottery and became master shipbuilders and traders, sailing the Mediterranean and exchanging olives, olive oil, wine, and pottery for grain and other goods.

This amphora shows two young men carrying an amphora, a large terra-otta storage vessel used for transporting wine and olive oil. You can tell they are carrying a vessel meant for trade and travel as the bottom is pointed, which allowed many vessels to be safely and securely stacked together. Explore a large storage vessel from Crete below. 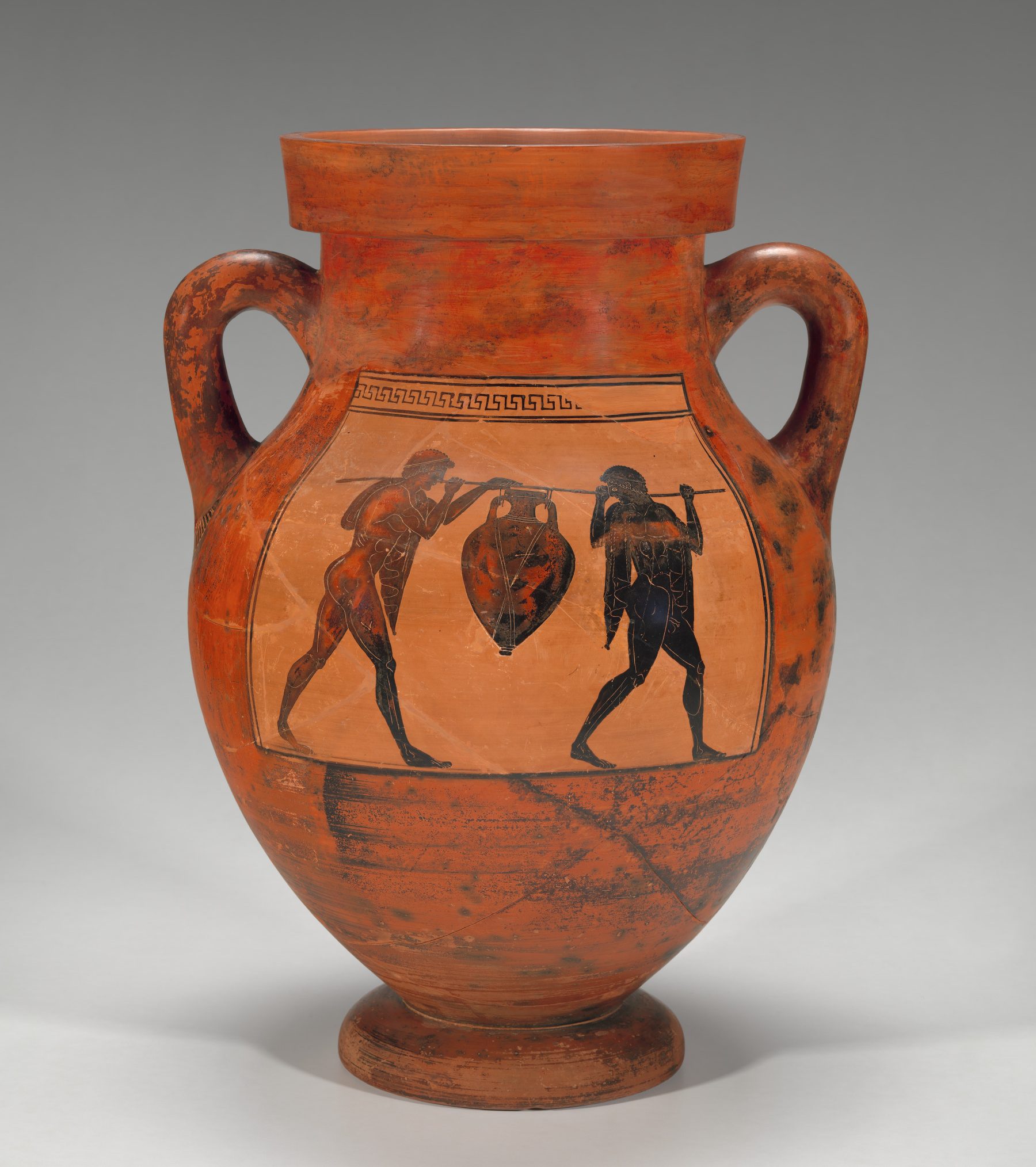 LOOK AT THIS! Greek Pithos

We do not imitate but are models for others. (Perikles)

Greek art, Greek literature, political system, science, and philosophy, greatly influenced much of the western world. Though the Greeks freely drew from other cultures, they have provided models that many others have followed for much of the past 2500 years. 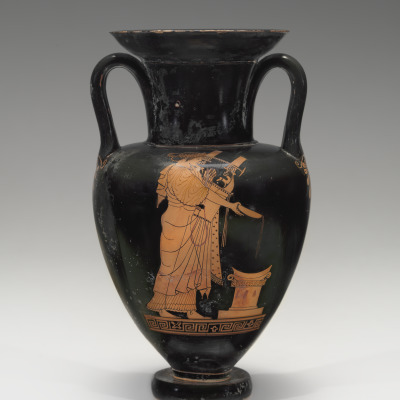 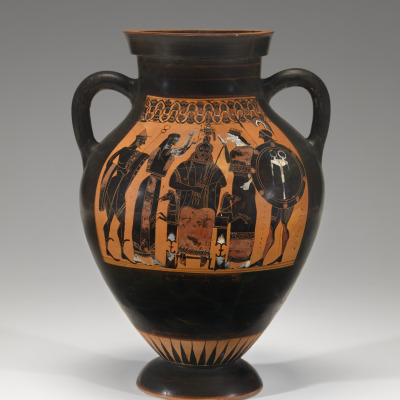 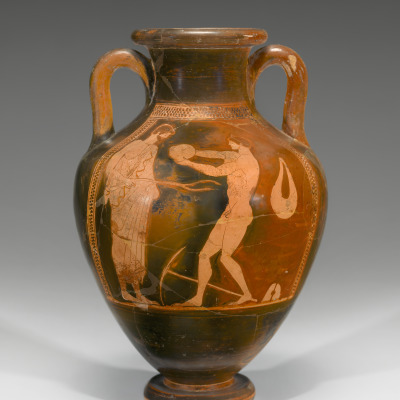 attributed to, Painter of the Hypobibazon Class (Artist) 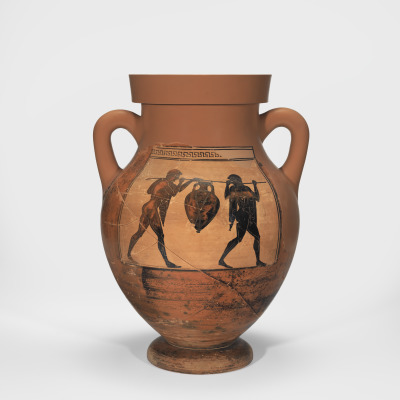 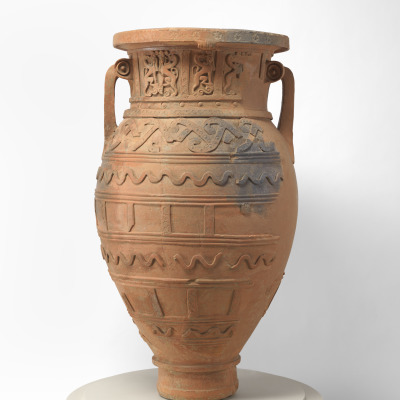