The Freeman Library is building digital collections that provide access to its unique special collections materials for teaching, learning, and research. In addition to providing greater access to these materials, digital collections aid in the preservation of materials by reducing the need for handling the originals. To explore special digital projects, see the list below. Click here to search all of the Library’s digitized materials. This portal is the culmination of more than three years of work to catalog, digitize, preserve, and disseminate the extensive Draper archive, which was acquired by the museum in 2015. The portal contains over 6,600 items which represent more than 50,000 images total, dating from 1947 to 2005. The digital portal is arranged like the physical archive but has been broken down into 50 parts to assist users in browsing the parts of the archive of most interest to them. Manuscript materials include correspondence, clippings, notebooks, exhibition announcements, and publications; photographic materials include contact sheets, prints, slides, and negatives; and photographic equipment includes cameras, lenses, filters, and exposure meters.

The detailed cataloging work that went into the project allowed VMFA to make deep connections with photographs by Draper that were already in the museum’s collection and inspired and informed the museum’s exhibition and catalog Working Together: Louis Draper and the Kamoinge Workshop. The exhibition includes a touchscreen tablet that features a curated selection of items from the archive that add additional context to the works on view. This project was made possible in part by the National Endowment for the Humanities: Exploring the Human Endeavor.

In 1973 a group of African American photographers in New York City published the first volume of The Black Photographers Annual. Concurrent with the Black Arts Movement of the 1960s and early 1970s, which encouraged the establishment of autonomous, black-owned publications to support black artists, the annual highlighted the work of forty-nine photographers. The majority of these images featured black subjects, photographed from a wide array of personal perspectives and expressed through a multitude of artistic styles.

Founded by Beuford Smith and published by Joe Crawford, this digital representation of The Black Photographers Annual was made possible by the generosity of Mr. Smith who granted the VMFA a copyright license to present these volumes online.

The Lillian Thomas Pratt Archives and Fabergé at VMFA

Bequeathed to the museum upon her death in 1947, Lillian Thomas Pratt’s Fabergé collection consistently remains one of the highlights of the museum’s permanent collection, and her archive documents the formation of this renowned Fabergé and Russian decorative arts collection. Comprised of correspondence, invoices, price tags, and detailed item descriptions, the archive illuminates Pratt’s mind as a collector, as well as the close relationship she formed with her dealer, Alexander Schaffer.

This new website not only provides access to the digitized Pratt archive, but also to newly filmed videos of the Imperial Easter Eggs opening, new 360° views of the Imperial Easter Eggs, and downloadable resources for educators. The website also links to the new Fabergé at VMFA mobile application that allows users to explore the collection through five different historical perspectives and design and share a Fabergé mini egg. This project was made possible in part by the National Endowment for the Humanities: Celebrating 50 Years of Excellence.

The 2016–2017 Museum Leaders in Training (M.LiT) program participants worked with the recently acquired archives of internationally-known Richmond artist and photographer Willie Anne Wright. Students surveyed four boxes of archival materials donated by the artist to the VMFA Archives. The boxes contain exhibition reviews, press releases, publications, installation photographs, professional correspondence, and personal letters relating to her work. The students selected items from the archive along with images of works held by the museum’s permanent collection to create a digital timeline that documents Wright’s artistic journey and process from the 1960s to the 2000s. The Willie Anne Wright archive was acquired as part of VMFA’s Virginia Artists Archives initiative.

Insectes by Eugene Alain Seguy is one of eleven albums of illustrations and designs that Seguy produced from the turn of the century to the 1930s. Papillons, also owned by VMFA, is the only other album of his illustrations and patterns dedicated to insect subjects. Seguy was one of the foremost French designers at the beginning of the 20th century.

Working in both the Art Deco and Art Nouveau styles, he published many design folios utilizing the pochoir technique, a printing process that employs a series of stencils to lay dense and vivid color via the application of layers of gouache paint. Seguy intended to inspire decorative designers and glorify the sublime beauty of nature.

Paul Poiret continued his practice of engaging artists to interpret his fashion designs with Les Choses de Paul Poiret illustrated by Georges Lepape in 1911. The album was distributed without charge to Poiret’s elite clientele. The look of this album differs greatly in style from the earlier album illustrated by Paul Iribe, as Lepape has taken a less traditional approach. In this example, Lepape shows some models turning their backs to the viewer or exiting the frame which introduces a narrative element to the scenes.

The illustrations are executed in pochoir and several images such as the face of a woman wearing a turban would become iconic images of the period. They have a feeling of modernity and the work is clearly a precursor to the Art Deco style introduced in the 1920s. Les Choses de Paul Poiret is widely considered to be one of the most important and beautiful fashion books of the early twentieth century. 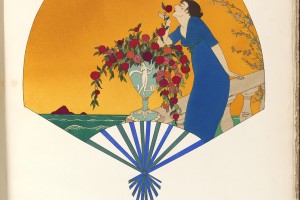 Three popular fashion illustrators, Paul Iribe, George Barbier and Georges Lepape all contributed to L’Eventail et la Fourrure Chez Paquin, a fashion album illustrating furs and fans made for the female couturier Jeanne Paquin. This rare and beautiful album for fashion design consists of 7 plates of designs executed in pochoir, printed by Maquet. Paquin is known for her business sense and her novel use of fans as a promotional tool. 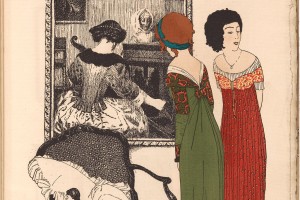 In 1908, Poiret commissioned artist Paul Iribe to illustrate Les Robes de Paul Poiret, a publicity album designed to showcase Poiret’s fashion collection for that year. The album comprises relief etchings on laid paper with hand-applied color (pochoir), bound in paper boards. Iribe’s innovative design approach was to emphasize the fashions by employing unshaded areas of bright color against black and white backgrounds. For this reason, the album is considered a landmark in the history of twentieth-century fashion illustration. In addition, Poiret’s couture styles created a controversy as they endorsed relaxed lines, effectively freeing women’s bodies from the corseted silhouette favored by past styles. 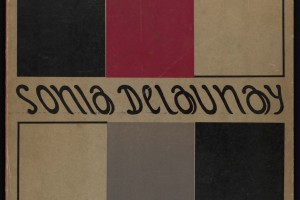 Published to coincide with the 1925 Exposition Internationale des Arts Décoratifs et Industriels Modernes (International Exhibition of Modern and Industrial Decorative Arts) held in Paris, this early portfolio features Delaunay’s designs for paintings, fashions, costumes, textiles, household objects, and decorative patterns. The large scale and fine print quality evident in this rare portfolio highlight the vibrant colors and dynamic lines that characterize Delaunay’s oeuvre. This folio demonstrates Delaunay’s ability to work in various media and is considered to be her most significant fashion and design statement.

Library is closed on state holidays.