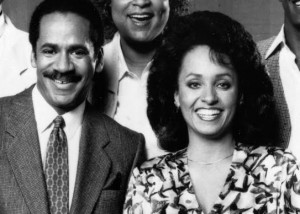 Actors Tim Reid and Daphne Maxwell Reid, accompanied by their colleague, producer Hugh Wilson, will appear and screen three of their favorite episodes of “Frank’s Place” for VMFA’s ongoing Friday Films. VMFA is proud to invite you to attend this Friday at 6:30PM in the Leslie Cheek Theater for a very unique and special event.

The innovative 1987-88 television series was co-created by Tim and Hugh with Tim and Daphne starring. The three will discuss the show’s history and provide behind-the-scenes insights.

“Frank’s Place,” set in a New Orleans restaurant/bar, lasted but a season on CBS but is fondly remembered among fans everywhere. It had a good-natured, slice-of-life sort of approach every week. Whimsical but thought-provoking situations would be presented with warmth and naturalism. Conversations and quips were often dropped in as if being overheard by the audience. A low key, atmospheric mood sometimes blended with comedy but the show avoided crass gags, facetiousness, and cheap jokery.

This approach was unique for the time and most any time. The show even fore went a laugh track—horrors! Amazing, they actually trusted the audience’s intelligence and ability to accept it as imminently entertaining.

The show’s setting was imbued with an appealing brand of deep Southern-ness particular to the city of Mardi Gras, Creole, jambalaya, Bourbon St., and hot jazz & blues. The icons are there but not milked to death nor reduced to silly clichés and stereotypes.

Many of you will remember Tim Reid from his days in the smash hit TV series, WKRP Cincinnatti (1978) as the hip and handsome “Venus Fly Trap,” but he has appeared extensively in an array of starring and supporting roles for over 35 years.

His first taste of the limelight came around the turn of the 70s when he met an insurance agent named Tom Dreesen, and the two of them decided to form a nightclub act called “Tim and Tom.” This innovative comedy duo pioneered a black-guy-playing-off-a-white-guy-and-vice-verse humor and was a big step in a show business that was undergoing so many changes right along with the world.

His biggest break came after nabbing the “Venus Flytrap” role on “WKRP.” It is this radio disc jockey character for which Tim is still best known. Other TV series came his way, including “Simon and Simon” (1981) as Lt. Marcel “Downtown” Brown.

Once firmly established, Tim started taking more control over his career. After fronting a number of series including “Frank’s Place” (1987), “Snoops” (1989) and, most notably, “Sister, Sister” (1994), he and wife, Daphne Maxwell Reid, co-founded their own production studio (New Millenium Studios), the first built in his native state of Virginia.

Over the years, Daphne has been a frequent partner to Tim both in front and behind the camera lens, as actress and co-producer. Besides having an impressive résumé packed with roles in television and film, Daphne’s mellifluous voice can also be heard regularly narrating VMFA’s “Art on the Air” on WCVE, 88.9, Richmond’s local NPR radio station.

Please make plans to be on hand to welcome these very accomplished and charming friends of both VMFA and our region in general for a chance to learn directly about the wonder and workings of big time “sho biz” and the art of creativity.