Images of cats are plentifully in evidence in VMFA’s exhibition: A Celebration of Print: 500 years of Graphic Art from the Frank Raysor Collection. The exhibition runs until May 22nd in the Mellon Focus Galleries. Admission to the exhibition is free.

Here are three of my favorite cats from the show:

Cornelis de Visscher Dutch, 1629–1658
Large Cat, 1657
Etching
The Maxine Hornung Collection Promised Gift of Frank Raysor,
L.149.2010.1
Visscher’s Large Cat is one of the most famous images of animals from the 17th century. It impresses the viewer with not only its anatomical realism but also its dramatic sense of anticipation for what will happen when the mouse captures the attention of the dormant cat. Though subject to allegorical interpretations (such as representing Vigilance), this image of domesticity must also be appreciated for its naturalistic detail.
Francisco de Goya Spanish, 1746–1828
The Claws of a Cat, but the Dress of a Devotee (Unas de Gato y Habito de Beato), from Los Proverbios, ca. 1824
Etching and aquatint
The Maxine Hornung Collection Promised Gift of Frank Raysor, L.149.2010.123
This plate from Goya’s Proverbs illustrates his anticlericalism, the product of his hatred of the Spanish institution of the Inquisition. However, typical of the broad range of Goya’s satire, this print also exposes the folly of all who seek to hide viciousness behind a façade of virtue.
Gerhard Marcks German, 1889–1981 Dignitaries, 1923 Woodcut
The Maxine Hornung Collection
Promised Gift of Frank Raysor, L.139.2010.129

Marcks began his career as a sculptor and ran a ceramics workshop associated with the Bauhaus school. Although his early sculpture and ceramics adhered to classical forms, his woodcuts, inspired by the German artist-illustrator Lyonel Feininger, were highly expressionist. Here Marcks displays the biting satire that characterized the German expressionist movement during the Weimar period. The preening cats are anything but dignified, proudly holding forth while occupying the lowly gutter. In addition to prints of cats a small selection of cat sculptures and decorative arts representing cats will be on show outside the gallery beginning this Saturday. 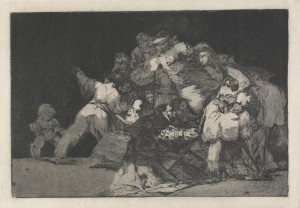