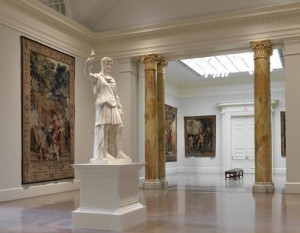 In 1967 the Virginia Museum of Fine Arts acquired a monumental statue of the Roman emperor Septimius Severus. The statue had once belonged to the famous 17th-century Italian collector Vincenzo Giustiniani (1564–1637), who displayed it with his extensive collection of ancient art. But in the late 1960s, scholars questioned whether any or all of the statue had actually been carved in antiquity. Eventually, VMFA took the statue off public view and placed it in storage. In 2007 the museum undertook a comprehensive research campaign using scientific and art historical methods to determine whether or not the statue is a work of ancient art. In addition to the extensive research and testing that was carried out, the statue was cleaned, conserved, and restored before being placed in the museum’s Tapestry Hall.

The 44th Annual WorldFest-Houston, the 3rd oldest international film festival in North America, has nominated the film documenting the conservation of this statue “Solving an Art Historical Puzzle, The Statue of Septimius Severus” for a platinum, gold, or silver award. Details will be posted on www.worldfest.org on Monday April 18.

This collaborative project was made possible through the generous support of the Richard Gwathmey and Caroline T. Gwathmey Memorial Trust. It called upon the expertise of multiple disciplines, including VMFA’s departments of Sculpture and Decorative Arts Conservation, Ancient Art, European Art, and Education.