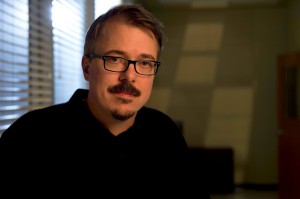 “If I could go back in time and talk to my fifteen-year-old self, I would say ‘Smile a little, talk to people, and don’t be such a sheltered little nerd’.” Usually you don’t hear such honest self-reflection from anyone, let alone a world famous Hollywood producer, director, and writer! But Vince Gilligan is no ordinary celebrity. Despite winning awards (Writer’s Guild Awards and a Peabody, among others), and creating Breaking Bad, one of the most successful TV series currently airing (called “the best of the 21st century” by author Stephen King in 2009), Vince Gilligan is down-to-earth, and always true to his roots. He will be the first to tell you – “I’m a Virginian and I always will be.”
When talking with Gilligan on the phone, he immediately jumps into discussion of how much he loves VMFA, and how enriching it was to him growing up – both intellectually and financially. Gilligan was the recipient of two VMFA Fellowships in the 1980s, of which he says ““You could trace a direct line from Breaking Bad, back through X Files which I was on for seven years, back through college, and to the Virginia Museum and how inspirational it was to me and how much financial aid it gave me.” He also grew up visiting VMFA: “We loved spending hours there, even as little kids.” Gilligan kept this interest in the arts throughout his adolescence and in college, demonstrated through his studies in NYU film school, and through his college job of moving and handling fine art for private owners and galleries. Fans of Breaking Bad would appreciate the way Gilligan tells stories over the phone, with dry wit and comedic timing – one story in particular had him belly laughing in recollection. Once, he was tasked with moving a piece by John DeAndrea. If you’ve seen VMFA’s works by DeAndrea on view, you’ll understand the uncanny realism of the artist’s life-size human sculptures – and why Gilligan was worried he might be pulled over with one of these works, wrapped in plastic, in his truck!
Gilligan is genuine and endearing, and his passion for his work is evident. His advice to artists everywhere is above all, “always be true to yourself and… be true to the stories you truly want to tell”.

Breaking’s Bad’s final season is currently airing on AMC; the hit show will be missed, but we’re sure Gilligan will have more stories to tell!

The VMFA Visual Arts Fellowship was founded in 1940 by the late John Lee Pratt of Fredericksburg, VA. Offered through VMFA Statewide, fellowships are still largely funded through the Pratt endowment, supplemented by annual gifts from the Lettie Pate Whitehead Foundation and the J. Warwick McClintic Jr. Scholarship Fund. VMFA has awarded almost $5 million to over 1200 Virginian artists. Applications for the next round of Fellowships are currently available online, and are due November 8, 2013: www.VMFA.museum/Fellowships